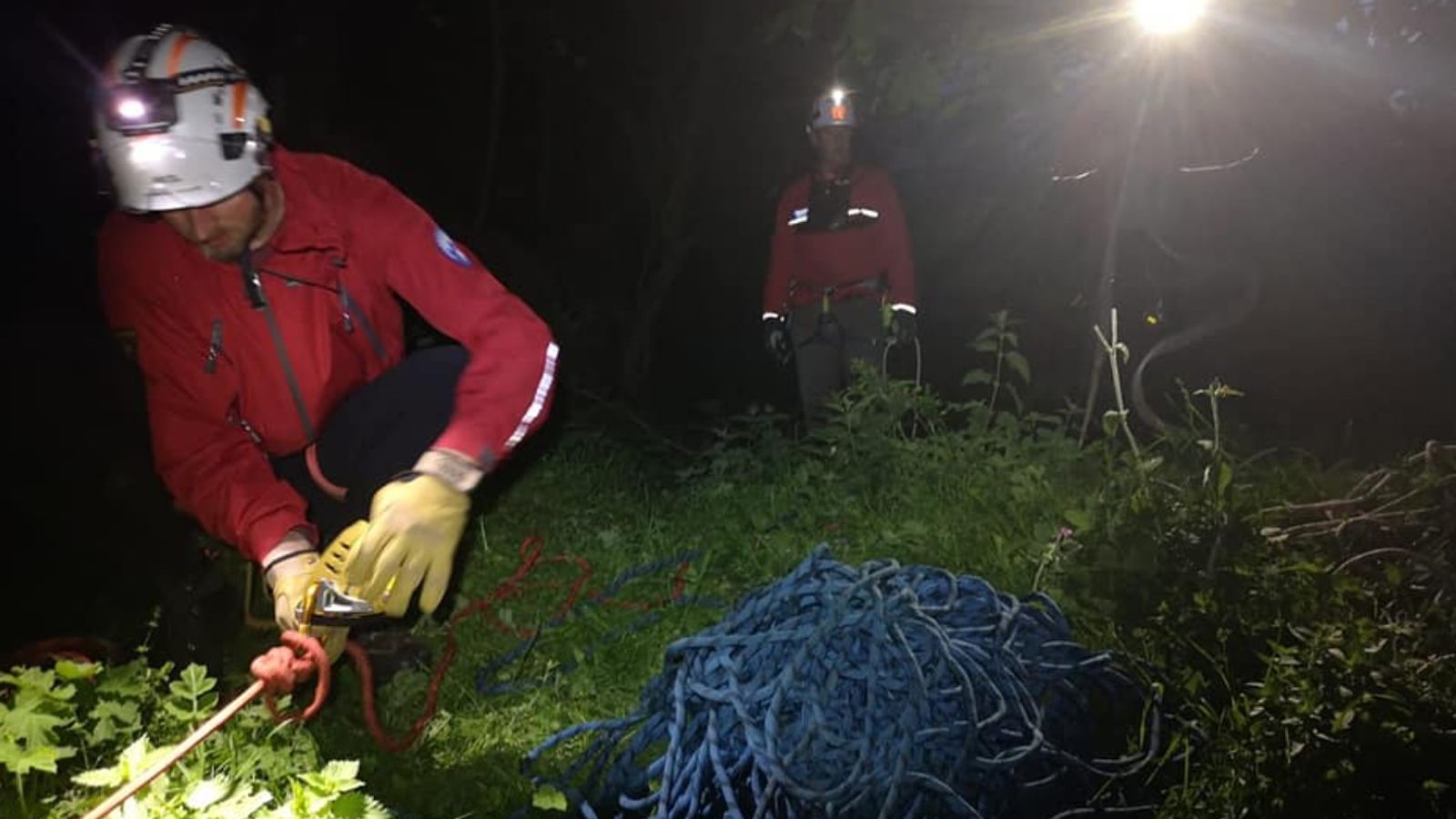 A comedy gig inside a cave in the Peak District had to be called off after a fan became trapped in a tree above the gorge, sparking a dramatic rescue operation.

The man, named as David, from London, was walking to see John Shuttleworth perform at Peak Cavern – also known as Devil’s A*** – in Castleton, Derbyshire, on Thursday night when he slipped and fell from a footpath into the outdoor venue.

The gig-goer managed to grab hold of a small Sycamore tree to break his fall, narrowly avoiding plunging 100ft to the cavern floor.

He had followed his sat nav while walking from his overnight accommodation to the cavern – but mistakenly ended up on the footpath above, Edale Mountain Rescue said.

The man was left dangling until rescue teams arrived to hoist him into a harness and haul him back up to the crag top.

He was assessed by paramedics after the rescue operation, which lasted more than two hours from 9pm, and emerged with only minor injuries including a cut and some bruising near to one eye.

However, the area had to be evacuated over fears that rocks could be dislodged on to the audience of 580 people below, forcing organisers to abandon the event halfway through.

They posted: “(The man) came into extreme difficulties and slipped, just managing to catch a tree to arrest his fall, inches from a 100ft drop to the cavern floor.

“Team members made their way to the top and quickly rigged up a technical rope rescue system.”

“Once this was all in place, a team member was lowered down to the gentleman’s position, where he was secured into a rescue nappy,” it added.

“The gentleman did not need further hospital treatment and was given a lift back to his accommodation by a team member.”

Shuttleworth – real name Graham Fellows – managed to see the funny side, tweeting how he would write a song about the incident, to be performed when he returns to finish the abandoned show.

He said: “The man who was clinging to the cliff – an incident which ended tonight’s show prematurely – is safe and now in an ambulance (so I have been told). We wish him well, and to my lovely Peak Cavern audience – thank you for evacuating so swiftly, and see you soon for the 2nd half!”

Fans tweeted to say they were glad the man was safe.

One joked how the first half of the show had ended on a cliff-hanger – as others warned not to rely on sat navs.

However the Peak Cavern Instagram account suggested David had trespassed over two barbed wire fences to gain access to the top of the gorge – and criticised his “sheer stupidity”.

A post said: “His idiotic selfish actions resulted in the concert having to be cancelled and the cavern evacuated. If you are reading this David from London I hope your conscience tells you to get in touch with us and make amends for your sheer stupidity.”

Peak Cavern’s entrance chamber is the largest natural cave entrance in the British Isles, lying deep in the gorge below Peveril Castle.