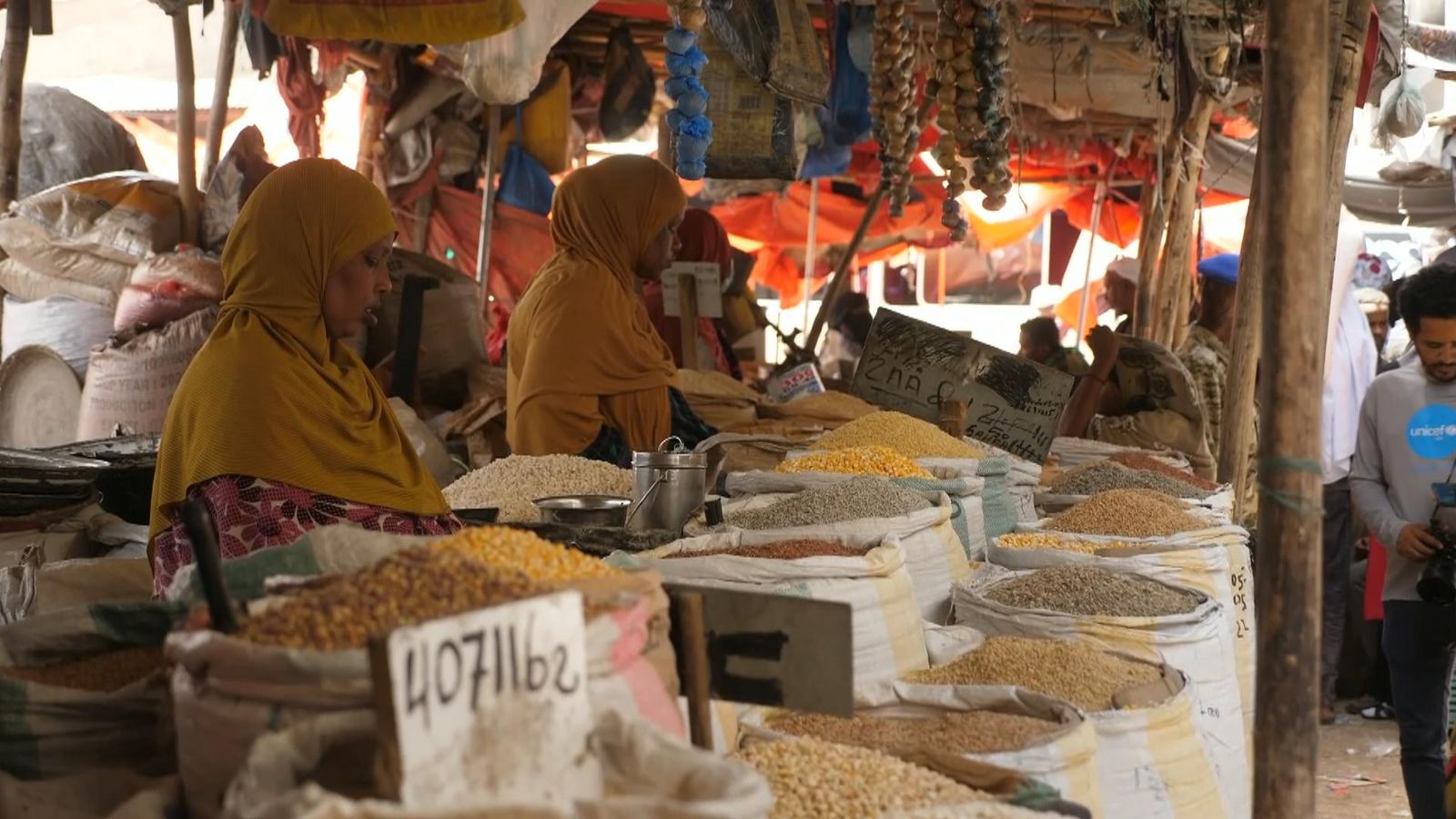 The ward for severely malnourished children was full. They were putting patients on mattresses on the floor.

One-year-old Mohamed was having a nasal drip inserted to make sure he gets vitally-needed fluids.

On the bed above him another Mohamed was being examined. Just two months old, he was born two months premature. He is his 17-year-old mother’s second son.

She travelled 400 miles to bring him to hospital and did not think he would make it.

“I was very, very upset and worried about his condition,” she told Sky News. “I was worried he would die. I was very very, very worried and I had pain about him and couldn’t sleep.”

The ward’s patients in Hargeisa, the capital of the self-declared republic of Somaliland, are all victims of the region’s worst drought in more than a generation.

“If the rains don’t come quickly the situation will become worse day by day and the number of patients will be increasing even hour by hour and day by day and we cannot handle it or we cannot save them.”

Right across the Horn of Africa they are bracing themselves for the double impact of war and famine.

The worst drought in 40 years is combining with the impact of Russia’s invasion of Ukraine. The war there may be thousands of miles away but it’s pushing up the prices of grain and fuel to unprecedented levels.

Somaliland and Somalia in general receive 90% of their grain imports from Russia and Ukraine, which is now reduced to a trickle.

Russia and Ukraine account for nearly a third of global wheat supplies. But Ukrainian grain shipments from its Black Sea ports have stalled since Russia invaded, with around 20 million tonnes of grain stuck.

In the market in Hargheisa, the capital of Somaliland, grain sellers all told us the same story. The price has shot up by 75% in three months.

As if that is not disastrous enough, the price of fuel has almost doubled, making it more expensive to get grain to those who need it.

In the world’s second poorest country, water comes to most people by trucks filling tanks on the street. Water is more scarce in the drought but much more expensive too because of the cost of fuel, up by 60%.

The impact of the drought has been made much, much worse by a war happening thousands of miles away.

The drought now threatens the worst famine in years. Camps are already filling with people who’ve lost any means of supporting their families. The parents are desperate.

We met Sophia who was a well-off keeper of livestock. She’s now destitute and living in a makeshift tent in Mandera camp halfway across Somaliland after the drought killed all her livestock.

In the background, they were using long sticks to pull branches and leaves from the trees to feed the goats with no grass left to eat.

But getting food to the people who need it will be a huge challenge.

Across the region, millions are facing acute hunger in the worst drought in over a generation compounded by the war in Ukraine.

And without international help agencies say hundreds of thousands will die of starvation.

Chancellor’s ‘Britain needs you’ plea to the retired may be a tall order
Netanyahu vows to ‘strengthen’ West Bank settlements after shooting attacks
See the chilling video Chinese protester made before her disappearance
Tesla updates Cybertruck production timeline: Temper your expectations
Girl, 15, dies and boy, 16, in hospital after stabbing – as teen arrested for murder