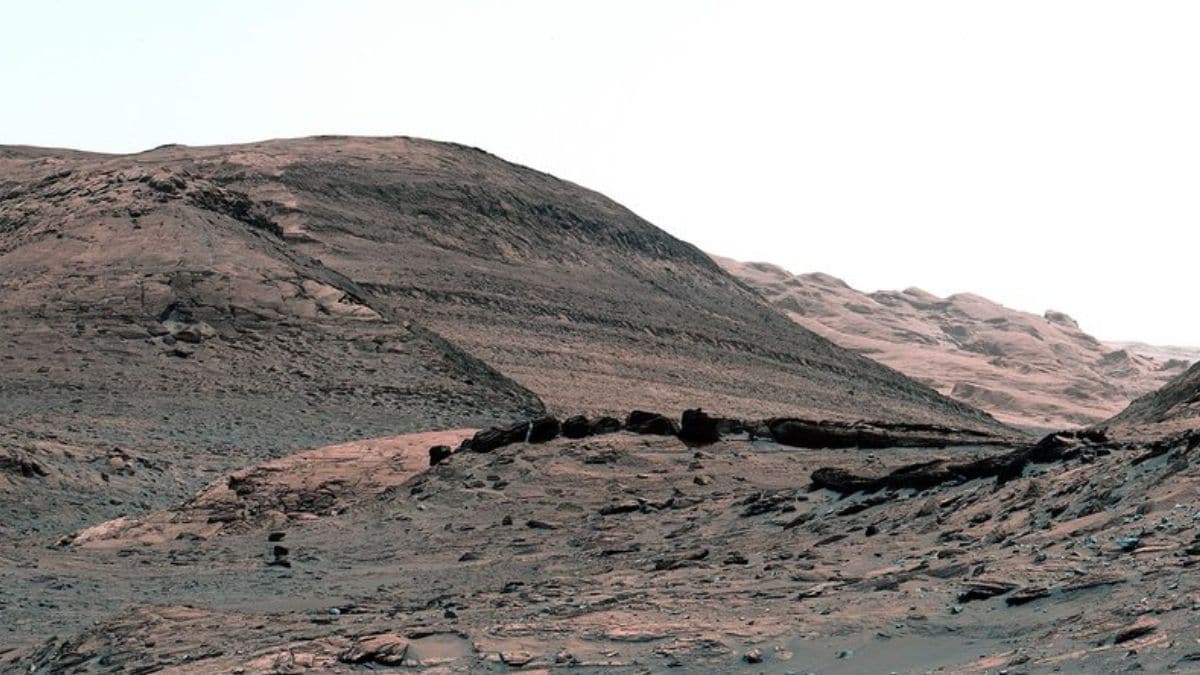 NASA’s Curiosity Mars rover has been traversing over a transitional region between a clay-rich region to a sulphate-rich region. In the process, the rover has been capturing images of rocks that had once been at the bottom of multiple stream beds on the red planet. Harkening to a distant past when water was found on the planet, the images and further observations are helping scientists piece together the mysteries of ancient Mars and how its once vibrant landscape became arid. Capturing a view of the sulphate-rich region, the composite show dark boulders that are thought to have been formed from sand deposits in ancient rivers and ponds.

One of the images shows a smattering of smaller greyish rocks that are strewn across a hill – remnants of a much larger sandstone unit that covered the area.

The composite has been stitched from 10 individual images taken by Curiosity’s Mast Camera, or Mastcam.

“Pretty ain’t it? I’m trekking through a transition zone between a clay-rich area and one filled with sulfate. Groundwater ebbed and flowed over time through these geologic features, leaving a puzzle my team and I can’t wait to solve,” wrote the team behind the Curiosity rover’s Twitter handle.

Pretty ain’t it?
I’m trekking through a transition zone between a clay-rich area and one filled with sulfate. Groundwater ebbed and flowed over time through these geologic features, leaving a puzzle my team and I can’t wait to solve. https://t.co/umIr7ctS3r pic.twitter.com/gZ8aSzYwtn

The transition between the clay-rich and sulphate-rich regions shows that groundwater levels changed over time between these regions, leaving behind pieces of a pre-historic puzzle that the scientists behind Curiosity will need to solve.

“We no longer see the lake deposits that we saw for years lower on Mount Sharp,” explained Ashwin Vasavada, Curiosity’s project scientist at NASA’s Jet Propulsion Laboratory, the team that built and operates the rover. “Instead, we see lots of evidence of drier climates, like dry dunes that occasionally had streams running around them. That’s a big change from the lakes that persisted for perhaps millions of years before.”

With Curiosity set to celebrate its 10th Earth year on Mars on August 5, the rover continues to climb higher through this transition zone higher onto the slopes of Mount Sharp, which the rover has been steadily climbing since 2014.

Marvel actor run over by snow plough while trying to save ‘screaming’ nephew
Seven dead after shooting at synagogue in Jerusalem
CNN fact-checks McCarthy’s ‘highly misleading’ claims about Pelosi
Starmer’s ‘radical’ promises have gone as he targets power – but we still don’t really know who he is
McIlroy vs. Reed in Dubai, Max Homa’s rise and more from the PGA Tour