The folk rap group opened their set in the early hours of Saturday morning, on Shangri-La’s Truth Stage, with a set of 13 songs – 12 of which were written in just 10 days, according to their team.

The crowd-pleasing Stephania – which has become an anthem of hope for their country since triumphing at this year’s Eurovision Festival – was the second in their set list and played again as their final track due to popular demand.

It’s been a swift switch in fortune for the band, who were fighting as part of Ukraine’s resistance against Russia just weeks before their Eurovision triumph in Turin.

On the morning of their performance the band shared a photo of them outside Big Ben in London, with the message: “Yo, today we perform at one of the world’s largest festivals @glastofest. We will perform at the same event with @billieeilish and @kendricklamar Every day we visit a new city and a new country, but we always get the same feedback – “Boys from Ukraine performed the coolest.” Next – more, this is just the beginning…”

On stage, rapper Oleh Psiuk (in his trademark pink bucket hat), multi-instrumentalist Ihor Didenchuk, and dancer Vlad Kurochka led the collective, who sang largely in Ukrainian, with some English language lines and raps. A translator was also present on stage.

Despite the enthusiastic audience of around 3,000 people only knowing one of their songs (Stephania) they quickly caught on to the catchy tunes, often singing along.

A call and reply section of the set was remarkably successful considering the language barrier, acknowledged by Psiuk who joked: “Who doesn’t know the Ukrainian language? Oh dear…”

Ahead of the song Love Train, Psiuk told the audience: “Just imagine it’s the last party of your life”, a poignant thought for an act performing as their fellow countrymen fight for their lives.

An earworm titled Stomba Womba particularly delighted festival goers, who chanted along as if it was a much-loved favourite, rather than a foreign song they’d never heard before.

Another song, Oh Mamon, echoed the theme of Stephania, celebrating a mother’s role in the family.

Of course, the Ukrainian pipe heard in Stephania made a frequent (and not unwelcome) appearance, along with beatboxing, the sound of birdsong in one tune and a mysterious Ukrainian instrument resembling a long thin guitar and held aloft a musician’s shoulder.

Ahead of their performance, the band’s frontman Psiuk told Sky News: “We want to share our culture and our music. And Eurovision was one point where we showed our Ukrainian music and want to spread it all over the world.

“We’re super happy to be here and we really want to impress everybody here.

“Right now, I feel a great support of all over the world. It’s great that people from here also support Ukraine. And we are very thankful to everybody, to each person who supports Ukraine.”

Their performance at Worthy Farm marks their first on British soil, and the band have become global stars following their Eurovision win with Stefania, which was dedicated to Psiuk’s mother.

The festival crowd certainly welcomed them warmly, despite the majority likely never having heard of them just a few months ago.

It’s been a quick rise to fame for the band, who signed to record label Def Jam as part of the Universal Music Group after forming in 2019 and have so far released two albums.

Since their victory, the band have been spending time in Ukraine and abroad in Germany to promote the release of the music video for Stefania.

They also auctioned off the glass microphone trophy they won at Eurovision to raise money for the Ukrainian army.

Last week it was revealed that the BBC is in talks with the European Broadcasting Union about hosting Eurovision, after the body ruled it could not go ahead in war-torn Ukraine next year in the tradition of the winning country hosting.

Commenting on the decision, Psuik told Sky News: “The Ukrainians are very upset about this news that the Eurovision may be not in Ukraine, but we hope there’s discussions going on right now. We do hope that Eurovision will still be in Ukraine.”

Away from Kalush Orchestra, Glastonbury will also play host to a number of other Ukrainian acts this year, amid Russia’s invasion of their country.

Go_A will open the John Peel stage on Saturday with a performance of electronic folk music and soaring vocal melodies.

The group, which formed in 2012, represented Ukraine at the Eurovision Song Contest in 2021 with the anthemic dance track Shum, placing fifth.

Kyiv folk quartet DakhaBrakha will perform on Sunday afternoon on the Pyramid stage.

The group, who combine the musical styles of several local ethnic groups, have described themselves as “ambassadors of free Ukraine” and have long used their performances to voice their opposition to war and the policies of Vladimir Putin. 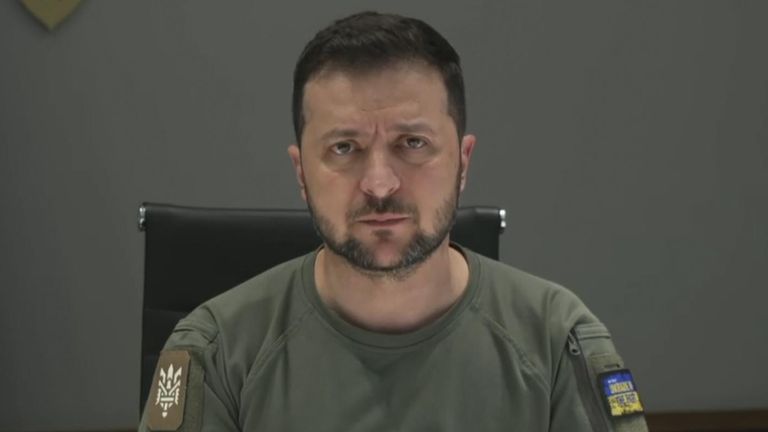 Meanwhile, on Friday, Ukrainian President Volodymyr Zelenskyy called on the world to “spread the truth” about Russia’s invasion of his country via a video message played out on the big screens at the Other Stage.

Calling Glastonbury the “greatest concentration of freedom”, Mr Zelenskyy told the crowd of thousands: “The festival resumes this year after a two-year break, the pandemic has put on hold lives of the millions of people around the world, but has not broken [us].

“We in Ukraine would also like to live the life as we used to and enjoy freedom and this wonderful summer, but we cannot do that because the most terrible has happened – Russia has stolen our peace.”

He finished his message by saying “Slava Ukraini”, which translates as “glory to Ukraine”, which was met with loud and rolling cheers from festival goers.

House Speaker McCarthy spoke with Musk about making Twitter ‘fair on all sides’
24 star Annie Wersching dies at the age of 45
How the violent arrest of Tyre Nichols unfolded
Flybe: Will I get a refund for my flight?
Electric vehicle start-up Arrival cuts 800 jobs as it focuses on US future