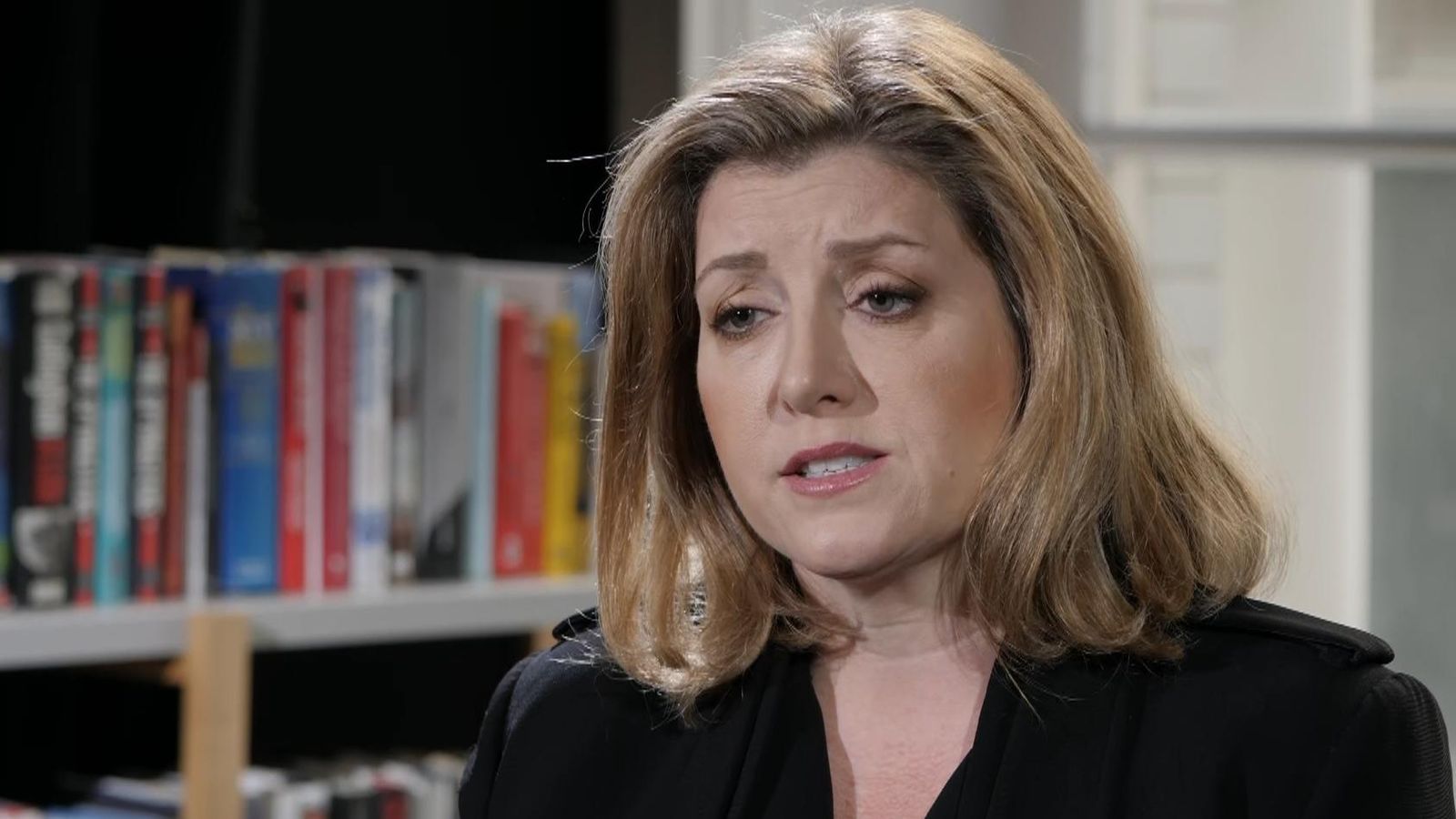 Penny Mordaunt has said fellow Conservative leadership candidates are trying to stop her from getting to the final round of the contest because she is who they most fear competing against head-to-head.

Tory leadership favourite Ms Mordaunt told Sky News’ political editor Beth Rigby that she is “running a positive campaign” and warned her fellow competitors that “we shouldn’t be doing each other down”.

The trade minister also accused others of engaging in “black ops” and suggested that this approach could damage the Conservative Party going forwards.

“People obviously are trying to stop me getting into the final because they don’t want to run against me,” she said.

Politics Hub: Latest reaction from Westminster as field to become next PM narrows

Probed on other Conservatives including former Brexit minister Lord Frost suggesting she is not competent enough to be prime minister, Ms Mordaunt continued: “People are going to try and stop me, and it’s right. That is right. Anyone going for this job needs to be tested and scrutinised.

“You’ll see from my campaign that I’m not engaging in any of that.

“I am running a positive campaign, and I’m talking in this campaign about the issues that the public are worried about.

“People are really worried already – and looking ahead to autumn – about the cost of living.

“I would talk about the merits of my approach, which is to not just win this contest, but to win a general election.

“And that’s why I’m not engaging in any of these black ops.”

Ms Mordaunt added that she would tell her competitors that they “might like to think about doing the same” because “the worst thing would be is if we come out of this contest not in good shape”.

Read more:
Who is Penny Mordaunt? 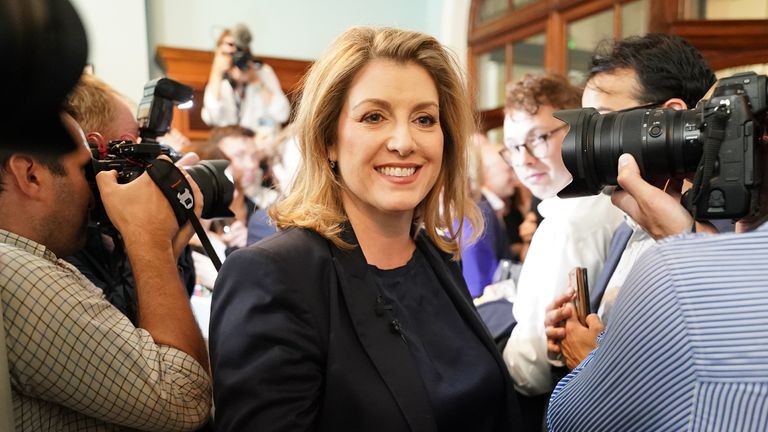 ‘This is Penny Mordaunt’s moment’

Ms Mordaunt told Sky News that all of her running mates “have a lot of great qualities” and that she has “huge respect” for all of them.

But she suggested, possibly in a slight dig at some of her rivals, that her life experiences put her in a better place to oversee solutions to the challenges that households are facing.

“I’m not going to make any comments about other candidates,” Ms Mordaunt said.

“What I think I bring… my strengths are that I have experienced quite a lot of difficulties in my life, and I think that’s important, and it helps you understand how to better deliver services to people.”

She added that her campaign “is not just about a leader at the top”, adding: “We need to build a team, we need to have smart people around that top table.”

Earlier this week, Ms Mordaunt suffered her first setback of the campaign when she was attacked by MPs over her stance on trans issues.

The former defence secretary has previously angered Tory traditionalists by speaking out in favour of trans rights and gender recognition. 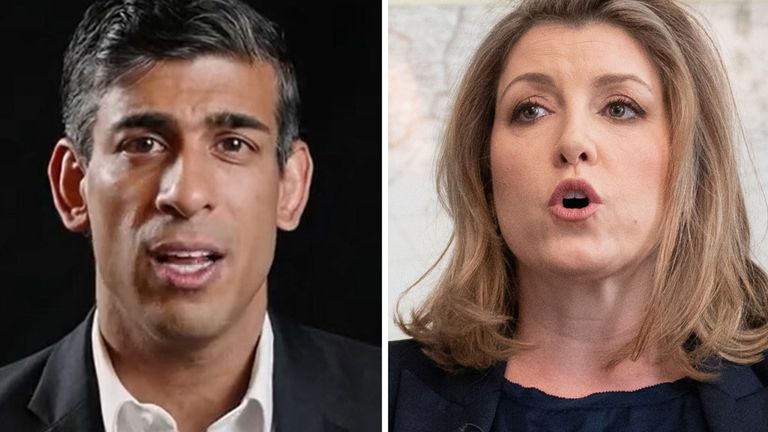 Speaking to Sky News, Ms Mordaunt said “Westminster is tying itself in knots” over the issue of whether women have the right to exclude trans women from single-sex spaces.

“I think we should be concentrating on the big issues that are worrying – and terrifying in some cases – the public,” she said.

“The huge cost of living issues that we have, access to health care, just the services that they want to see run really efficiently from the state.

“I understand why people are trying to stop me getting into the final two, but I am going to stay focused on the things that matter to the public and the people we’re here to serve.

“They do care about these issues, but they’re not the things that they want their government to be obsessing with.

“They want us to focus on helping them through this cost of living situation, and on getting them access to the NHS that they pay a lot of money for, and all the other things that they want to help support their lives.”

Mordaunt back on stage and on track to becoming PM

Up until this week, you probably hadn’t ever heard of Penny Mordaunt. Why would you?

She hasn’t been in Boris Johnson’s cabinet and doesn’t have much public profile.

She’s a politician that’s probably best remembered for her appearance in the TV series Splash! in 2014, when she belly-flopped on prime time.

But Ms Mordaunt is now very much back on the stage, as she streaked through the first two rounds of the Conservative leadership race, falling into second place behind Rishi Sunak and becoming the candidate that both the former chancellor and Foreign Secretary Liz Truss both fear the most.

If she can make it to the final two candidates in the coming days, she’s on track to becoming the next prime minister, outpolling both Ms Truss and Mr Sunak with the party members who will decide this race. But who is she, what does she stand for, and has she got what it takes to do the job?

That’s what I got into in our interview – the first extended TV grilling she’s done since announcing her candidacy.

What I found out was pretty clear. Penny Mordaunt has been preparing for this for some time – she’s well-prepared.

Of course, all candidates will claim that – but in truth, not all believe it. She does.

That kind of self-certainty is crucial in a brutal contest like this. But it is not enough on its own. There remain major questions over whether she has the political experience to take on the top job.

It comes as the five remaining candidates in the leadership race prepare to go head-to-head in the first live TV debate tonight.

Channel 4 will broadcast the showdown at 7.30pm, followed by another debate on ITV on Sunday.

Sky News will be hosting a third debate on Tuesday night at 8pm – after more candidates have been eliminated through further rounds of voting in Westminster.

Ms Mordaunt has pledged to take part in this debate.

The hopefuls still in the running are Rishi Sunak, Liz Truss, Tom Tugendhat and Kemi Badenoch, after Suella Braverman got knocked out yesterday.

Mr Sunak came out on top in the second ballot of Tory MPs – with Ms Mordaunt second and Ms Truss third.

But polls suggest Ms Mordaunt is the most popular among Tory members – and she remains the bookmaker’s favourite to become the next prime minister.

The contest will be whittled down further on Monday, when a third round of voting will take place.

The final two leadership hopefuls will emerge by the end of next week and then face a summer of hustings – with Conservative Party members getting the chance to decide who should become the next prime minister.

A winner will be announced on 5 September – and Mr Johnson will remain in Number 10 as a caretaker prime minister until then.

The debate will take place on Tuesday 19 July at 8pm.