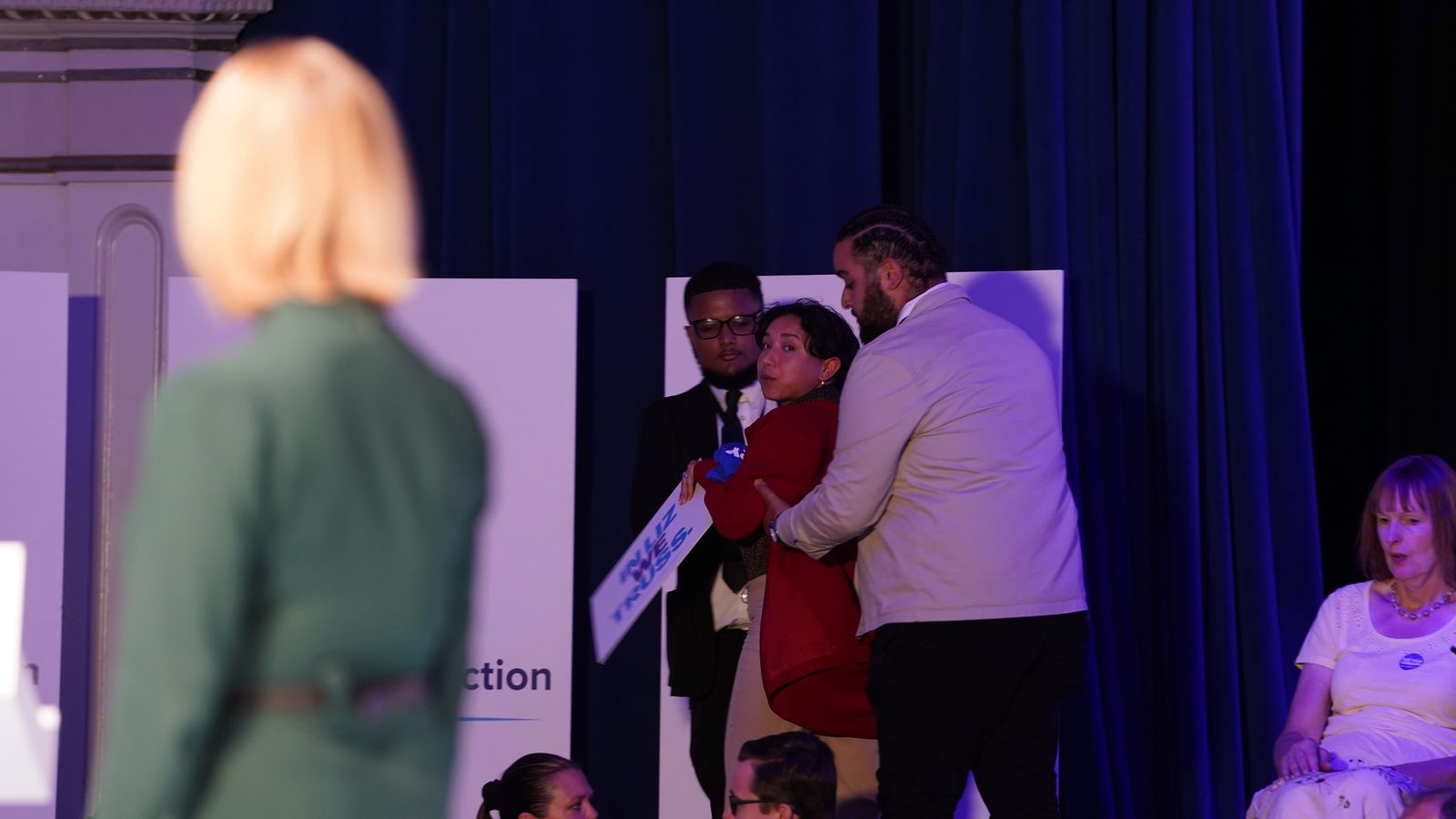 Liz Truss was interrupted by activists as she attempted to deliver her opening speech at a Conservative Party hustings in Eastbourne.

The protesters from Green New Deal Rising shouted “shame on you” and “Green New Deal” as they stood holding placards inside the hustings venue.

“I think we have some infiltrators and I will wait until they are evicted,” Ms Truss said, pausing her speech.

Tory members in the audience could be heard chanting “out, out, out!”

“I would legislate immediately to make sure that we are standing up to militant trade unions who stop ordinary commuters getting into work. And I would legislate to protect our essential services.”

The foreign secretary added: “And I will make sure that militant activists such as Extinction Rebellion, are not able to disrupt ordinary people who work hard and do the right thing and go into work.

“I will never ever, ever allow our democracy to be disrupted by unfair protests.”

Ms Truss was later in the hustings interrupted by a heckling protester for a second time.

“Can I just say I take it as a compliment that I am so popular with Extinction Rebellion,” the foreign secretary quipped.

Green New Deal Rising describes itself as a movement of 16-35 year olds who are disrupting politicians to protest the climate and economic crisis and demand a Green New Deal – a 10-year plan to create millions of good green jobs and restructure the economy.

Speaking to Sky News, one of the protesters who was ejected, Fatima Ibrahim, said those of them in the room were “angry”.

“We are angry young people who’ve watched these hustings and are tired of candidates who avoid the real crisis and the only answer they give is tax breaks to their rich mates and the likes of BP and Shell while the rest of us are told to tighten our belts,” she said.

“As a movement we’ll be challenging whoever becomes PM.”

She added that Ms Truss has “no credible plan” to deal with the energy crisis.

A press release put out by Green New Deal said the five activists stood up and interrupted Ms Truss during her opening remarks to protest the rising cost of energy bills and the climate crisis.

The group said they are acting in a week where energy companies BP, Shell and Centrica announced record-breaking profits and when British household energy bills are soaring.

Another US state adds electric bike subsidy, this time with up to $1,700 rebate
See moment man who went overboard cruise ship was spotted
‘Doctors are carrying out heart surgery by flashlight’: Liev Schreiber on his $1m fundraising for Ukraine
Christmas travel warning as road workers to strike at same time as rail walkouts
Schiff fires back after McCarthy threatens to remove him from intel committee