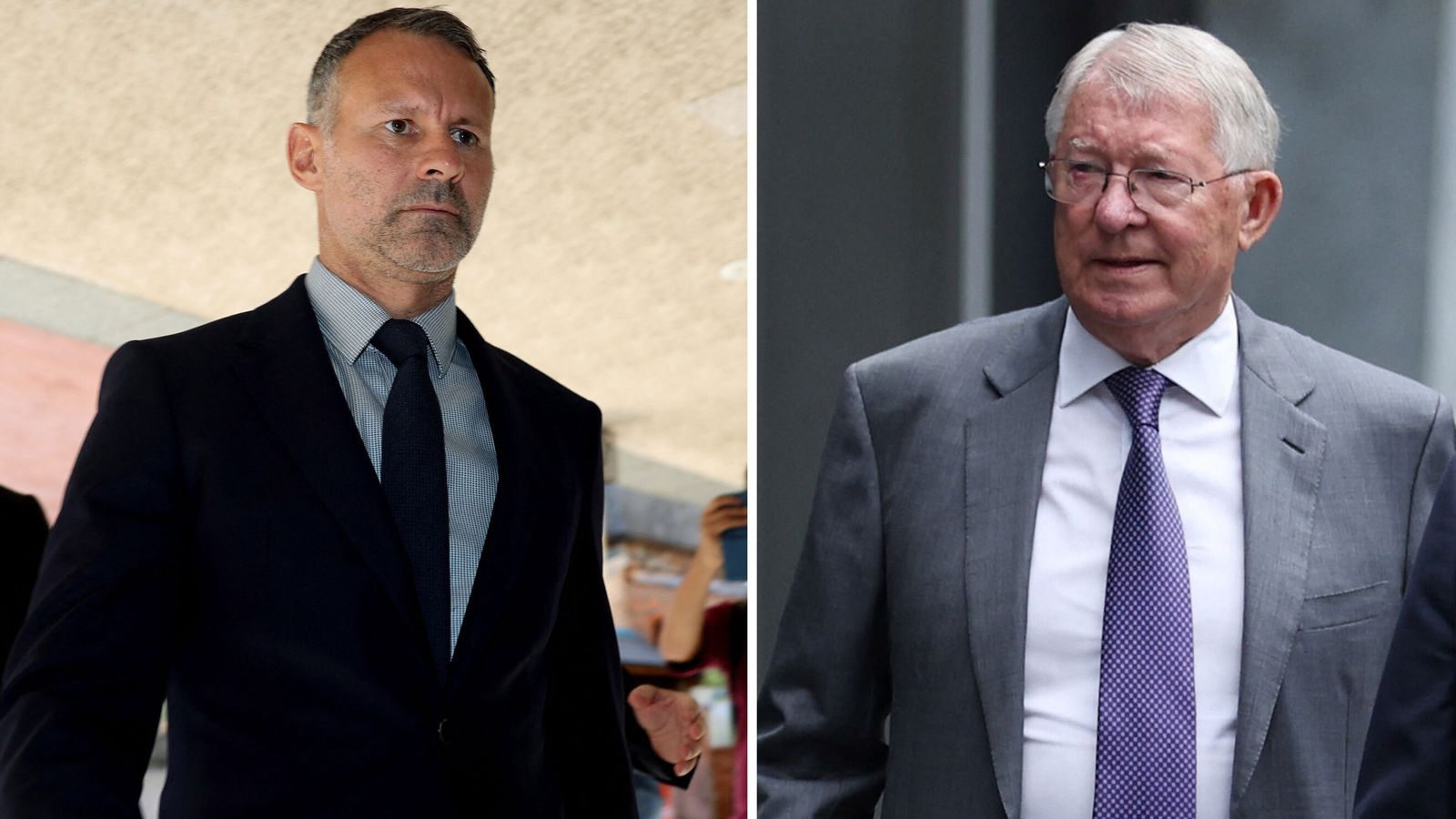 Sir Alex Ferguson has told a court that Ryan Giggs has a “fantastic temperament” and he never saw him lose his temper, as he gave evidence at his former player’s assault trial.

The ex-Manchester United manager said Giggs would “feel the sharp end of my tongue” during his playing career but was “without doubt the best example we had at the club”.

Earlier, jurors heard a letter written by Giggs’s ex-girlfriend Kate Greville called “the final goodbye” where she named several women he allegedly cheated with during their relationship – including a cricketer’s wife.

Giggs is standing trial accused of using controlling and coercive behaviour against Ms Greville, as well as assaulting her and sister Emma.

He denies the charges against him.

Read live updates from the trial as they happened

Giving evidence in Giggs’s defence on Friday, Sir Alex described his former player as “a quiet boy” who he got to know aged 13 when he went to his family home to “convince him” to join Manchester United.

He said he had to “protect” Giggs when he began playing for United’s first team aged just 17 after the winger was compared to legendary player George Best.

Asked if he was aware of Giggs having girlfriends, Sir Alex said: “When we had dinners at the end of the season he would bring a friend with him, yeah.”

The former manager later told the court: “I used Ryan a lot in the sense of, when I lost my temper about performance I would use Ryan as an example sometimes.

“He got the sharp end of my tongue, but I knew he could take it, he was strong enough.

“Everyone else in the dressing room would think: ‘If Ryan Giggs can take it, we can all take it’.”

Sir Alex – who managed United for 27 years before retiring in 2013 – said Giggs had a “fantastic temperament” and was “without doubt the best example we had at the club”.

“Everyone looked at Ryan Giggs as the number one,” he added.

Asked by Giggs’ barrister Chris Daw QC if he had ever seen him “lose his temper or become aggressive”, Sir Alex replied: “No.”

A written statement from Manchester United’s former chief executive David Gill was also read to the court in which he said he found Giggs “to be honest”.

“You can trust what he said,” Mr Gill said of Giggs.

Earlier, jurors heard the contents of a letter written by Ms Greville on 29 October 2020, three days before Giggs allegedly headbutted her at his home.

Giggs’s defence team read the letter, which began: “I know pretty much everything you have been doing with other women behind my back since the day I met you.”

In the letter, Ms Greville described Giggs as a “compulsive liar and serial cheat”, telling him: “My gut always told me you couldn’t be trusted.

“I now know you say the same things you say to me to multiple women.

“I’m nothing special, I was just the one you didn’t let have a happy life.”

Ms Greville, a PR executive, claimed the “other women” have “husbands and kids”.

Jurors heard she wrote: “I know you and Helen had a full-on relationship while you were sleeping with me.

“You told her you loved her and wanted to have a family.”

Ms Greville wrote that “Helen” had “met the kids” and that she and Giggs were “in constant contact, even now”.

She went on to say: “You and Zara were also in a full-on relationship for nearly a year,” adding that Giggs “got your Harrods guy to send her a pair of shoes and a dress”.

Ms Greville added: “I know about Natalie and Suzie, not to mention Kelly.

“I know about the women you meet at the Stafford.”

She also accused him of “sending dirty messages about threesomes with Charlotte from Hotel Football”.

The letter also detailed an incident of Giggs “sh**ging someone else” when he was supposed to be picking Ms Greville up.

“Oh, and I know about Steph – she’s married to the cricketer now,” Ms Greville wrote.

She accused them of having a “full blown affair in 2014” which “carried on the whole time you were seeing me”.

Ms Greville added: “Let’s not forget about (name redacted)” – another woman he was accused of being unfaithful with.

The letter continued: “You will never lie to me or cheat on me again.”

Ms Greville said she intended to keep the puppy she and Giggs had bought.

She went on: “You were constantly telling me you want to be happy but us girls can always tell when a man is lying and cheating.

“A little bit of advice: If you want to be happy with someone, be honest. Don’t cheat.

“I believe you loved and still love Helen, but you cheated on her with me.”

Giving evidence at his trial earlier this week, Giggs admitted his “love cheat” reputation was justified, and he had been unfaithful in all his past relationships – including “quite a public affair” on his ex-wife Stacey.

However, the 48-year-old insisted he had never physically assaulted a woman.

The trial at Manchester Crown Court was adjourned until Monday.