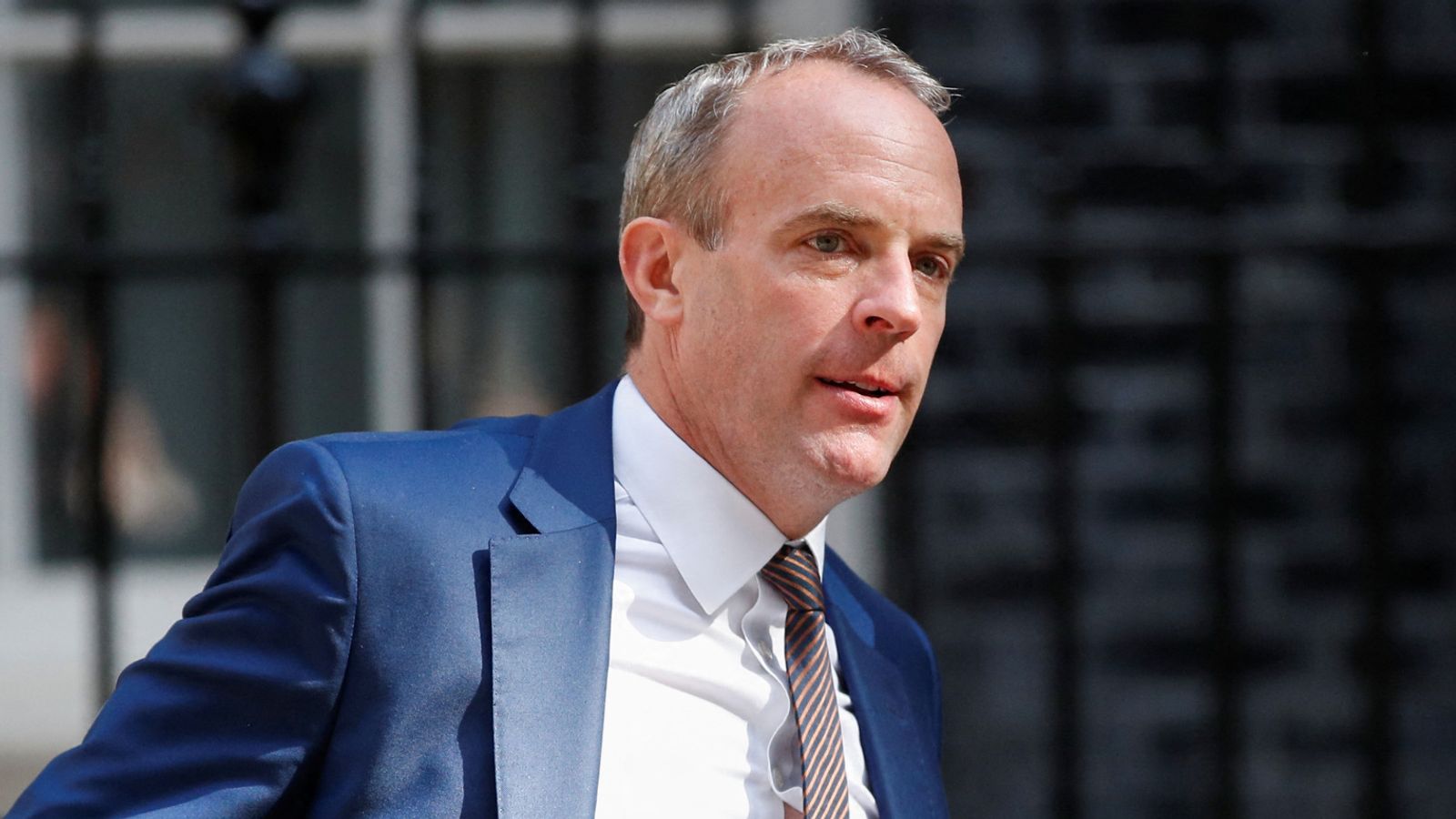 Just three weeks ago, Dominic Raab was sitting in Number 10 being offered his old jobs back, after a short hiatus from government thanks to Liz Truss.

But now he has returned to government as justice secretary and deputy prime minister, he is facing questions over his conduct during his previous tenures in the roles, and at other departments too.

Sources close to Mr Raab have hit back at the claims, with a number of his Tory colleagues standing by him as “an excellent and considerate boss”.

However, as accusations continue to emerge, let’s look back at what has been reported so far:

‘Respite or route out’

The first claims against Mr Raab emerged on Friday in The Guardian about his stint at the MoJ between September 2021 and September 2022 under Boris Johnson.

The newspaper said around 15 senior civil servants in his private office had been offered “respite or a route out” after his return was announced, due to concerns some were still traumatised from working for him.

Multiple MoJ sources also said he had previously created a “culture of fear” in the department, alleging he was “demeaning rather than demanding” with civil servants, and that he was “very rude and aggressive”, adding: “[He] wasn’t just unprofessional, he was a bully”.

But a spokesperson for the department said there was “zero tolerance for bullying across the civil service”, adding: “The deputy prime minister leads a professional department, driving forward major reforms, where civil servants are valued and the level of ambition is high.”

Within hours of the story breaking, two more emerged from Mr Raab’s earlier time at the MoJ.

One in the Sun claimed he had thrown tomatoes from his salad at staff.

And another in the Mirror said he had been given the nickname “The Incinerator” because of how quickly he “burns through” employees.

But the deputy PM’s spokesman called the salad attack claim “complete nonsense” and denied a high turnover of staff in his departments.

All three of the articles also claimed the permanent secretary, Antonia Romeo, warned Mr Raab to treat staff with respect on his return, with one source, who was not in the room at the time, saying she had “read him the riot act”.

On Saturday, a single source told ITV News that the Cabinet Office had been informed about concerns over Mr Raab’s behaviour when he was Brexit secretary in 2018.

The Observer picked up the story, saying a “formal expression of concern” had been sent to a senior official in the Department for Exiting the European Union, alleging “unprofessional, even bullying, conduct of the minister towards his private office”.

But the Cabinet Office told the newspaper it had “no record of any formal complaints” being passed onto them.

Come Sunday, the focus fell onto Mr Raab’s time as foreign secretary, between July 2020 and September 2021.

A survey was leaked to ITV News showing eight people working in his private office at the time claimed to have been bullied or harassed at work, while 15 staff reported witnessing another person being bullied or treated unfairly.

The results were anonymous, though, so neither the perpetrator nor victim could be identified.

In response, a spokesman for Mr Raab said he had “high standards, works hard, and expects a lot from his team as well as himself”, but that he “worked well with officials” and “always acts with the utmost professionalism”.

As Rishi Sunak travelled to the G20 summit in Bali on Sunday night, he faced questions about the reappointment of Mr Raab, but insisted he did not “recognise that characterisation” of his colleague and was “unaware” of any formal complaints being made against him.

A Number 10 spokeswoman also said: “As the prime minister has said before, people in public life should treat others with consideration and respect. Those are principles that this government will stand by.

“There are established procedures by which civil servants can raise complaints. These processes allow allegations to be looked at and considered with due process and a fair hearing.”

When Monday rolled around, an interview with a former top official at the Foreign Office during Mr Raab’s tenure set tongues wagging again.

Former permanent secretary Lord Simon McDonald was asked on LBC whether the previous days’ bullying allegations were plausible, and he replied: “Yes.”

He added: “Dominic Raab is one of the most driven people I ever worked for, he was a tough boss.

“Maybe they are euphemisms, but I worked closely with him and I didn’t see everything that happened.”

Within hours, there was another story from The Guardian, claiming Mr Raab had been warned about his behaviour towards officials at the Foreign Office on multiple occasions by none other than Lord McDonald.

The paper also alleged that Lord McDonald had several informal conversations with the head of the propriety and ethics team at the Cabinet Office about him between 2019 and 2020 about the issue.

A spokesman for Mr Raab told The Guardian: “Dominic had frequent discussions with his permanent secretary at the Foreign Office about how best to run the department and ensure that it delivered to the highest standard in challenging circumstances such as during COVID.”

Tuesday and Lord McDonald was back on the airwaves, talking to Times Radio about Mr Raab. He went further than in his LBC interview, saying many colleagues were “scared” to go into the then foreign secretary’s office when he was in charge.

The peer said Mr Raab “was not aware of the impact of his behaviour on the people working for him and couldn’t be made to see that impact”, adding: “Colleagues did not complain to me formally, it was kind of their professional pride to cope, but many were scared to go into his office.”

And he said the minister’s defence was that “he treated everybody in the building in the same way – he was as abrasive and controlling with junior ministers and senior officials as he was with his private secretaries.”

But again, Mr Raab’s spokesman insisted he had “acted with professionalism and integrity in all of his government roles”, adding: “He has an excellent record of driving positive change in multiple government departments by working well with officials.

“He holds everyone, and most of all himself, to the high standards that the British people would expect of their government.”

There was another accusation coming his way – this time from Labour’s Lisa Nandy, who shadowed Mr Raab when he was at the Foreign Office.

She told Sky News she had heard “a number of rumours this was a pattern of behaviour”, adding: “It’s been something of an open secret in Westminster for the last few years there is a problem in the justice department, there was a problem in the Foreign Office – it was apparently particularly directed towards women.

“I think it’s really damning that Rishi Sunak has appointed Dominic Raab to this post knowing that this is potentially an issue.”

But Mr Raab’s spokesman “categorically” denied the allegation, while his team said suggestions he has a woman problem was “nonsense”.

A source close to Mr Raab said: “This is baseless mudslinging with no grounding in reality, and undermines serious cases of bullying and inappropriate behaviour.”

Wednesday means Prime Minister’s Questions and, as Mr Sunak’s deputy, it is down to him to stand in while the boss is away at the G20 summit.

But the drama came early as two hours before his appearance, he sent out a tweet, revealing he had written to the PM to request an independent investigation into two formal complaints that had been made against him – one at the Foreign Office and another at the Ministry of Justice.

Mr Raab said he had “never tolerated bullying, and always sought to reinforce and empower the teams of civil servants working in my respective departments”.

But he promised to “cooperate fully” with the investigation and “respect whatever outcome you decide”.

Mr Sunak replied, agreeing this was “the right course of action”, adding: “Integrity, professionalism and accountability are core values of this government. It is right that these matters are investigated fully.”

Now we await its conclusion…