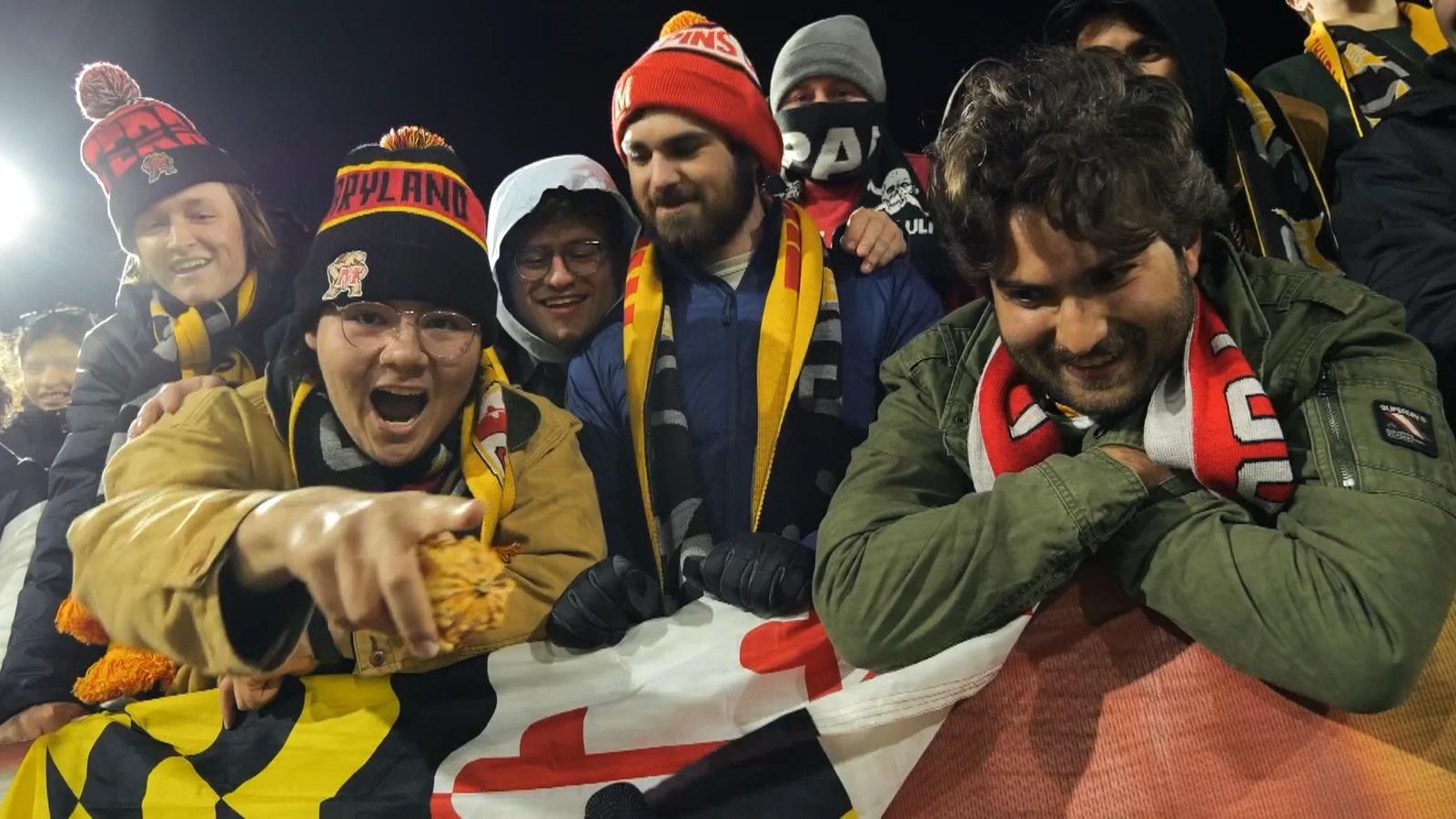 “Soccer’s coming home,” they sing, to the tune of the Skinner and Baddiel classic.

It’s a chant of choice for American fans ahead of the World Cup showdown, poking fun at their English opponents.

We heard it from the crowd watching the University of Maryland take on Fairleigh Dickinson University.

The gag is, of course, the replacement of the word “football” with “soccer” – for UK listeners, it’s a lyric that could only have been written in fingernail on a blackboard.

As supporter wind-ups go, it’s at the benign end of the scale, far removed from the terracing attrition in the land where the game began. Some cultural traditions, it seems, take longer to transfer.

US soccer is football, but not quite as we know it in the UK, certainly not as we speak it.

It’s where players “turn and burn”, wear “cleats” on their feet, not boots; take “PKs”, not penalties and, yes, take liberties with the very name of the game.

From fall guys to contenders

However you word it, the US men’s team have come a long way. They are fall guys-cum-contenders in a sport that America found late.

As the game grew worldwide, it struggled for space in a crowded sporting marketplace, squeezed out by American football, baseball, basketball et al.

America’s male footballers have long been in the shadow of the country’s women’s team. They are a sporting superpower and serial winners of the World Cup (a record four times).

The women’s game has reaped the benefit of a college system that was attracting many of the country’s best female athletes to soccer scholarships, while their male counterparts leaned towards more traditional US sports.

The US Soccer Hall of Fame at FC Dallas hosts a display that recalls the 1950 World Cup match when America’s men, famously, beat England 1-0.

It was such a shock that they made a film of it: The Miracle Match. Seventy-two years on, there would be nothing miraculous about a US win against England in Qatar.

Men’s soccer has ‘taken off’

After a stilted journey towards an established soccer set-up, the US men’s team are ranked 16th in the world.

FC Dallas president and chairman Dan Hunt spoke to Sky News about how the men’s game, domestically, has grown.

He said: “The success of American soccer really goes back to 1994. Having the World Cup here in the United States kicked off a new generation of players on the men’s side.

“The women’s game was already successful and doing well, but the excitement and energy that brought really kickstarted soccer again in this country.

“It’s been a history of fits and starts and stops. You look at the big win against England in 1950, which was such a reference point, and then we basically went dark for 40 years, between 1950 and 1990.

“The old NASL (North America Soccer League) has come and gone. The promise that we had to make as a country was to create a first division professional league, and that’s what brought MLS (Major League Soccer) to life.

“The early years of MLS were incredibly difficult but, for me, the most pivotal moment was the 2002 World Cup where the US team did really well with a number of MLS players.

“Some had already gone abroad and had success in Europe, but that really was the foundation because, only a year earlier, MLS had talked about going out of business and that was the little bit of momentum we needed.

“Since then, the MLS has really taken off.”

Read more:
US and Wales share the points in World Cup opener

While football club academies in America have, increasingly, become a feeder to the highest level of the sport, the college system still provides a pathway to the professional game.

The University of Maryland is a powerhouse production line of talent – graduates from its scholarship programme have played in the last five World Cups.

Sasho Cirovski is the university’s coach, whose career has spanned decades of growth in the American game.

He told Sky News: “The American college system is unique to the whole world. It’s the one place in the world where you can combine high level academics with high-level soccer in a residential setting with tremendous facilities.

“You’re scrutinised by the media, you’re challenged by the coaches, and you’re around players who also want to be high-level pros and win championships. So, when you have that kind of support network where you can grow, and you can blossom, it allows players to realise their dreams.

“We have the great advantage in this country of being able to watch and experience and learn from other sports. There is a character and competitiveness about the American athlete – a winning mentality, a toughness that is bred across different sports.

“For a long time, we had to learn from watching the Bundesliga or English Premier League – now we can see it in our own country. But we can also see it from other sports, so there’s a wide array of learning around you that really shows you what it’s going to take to be great.”