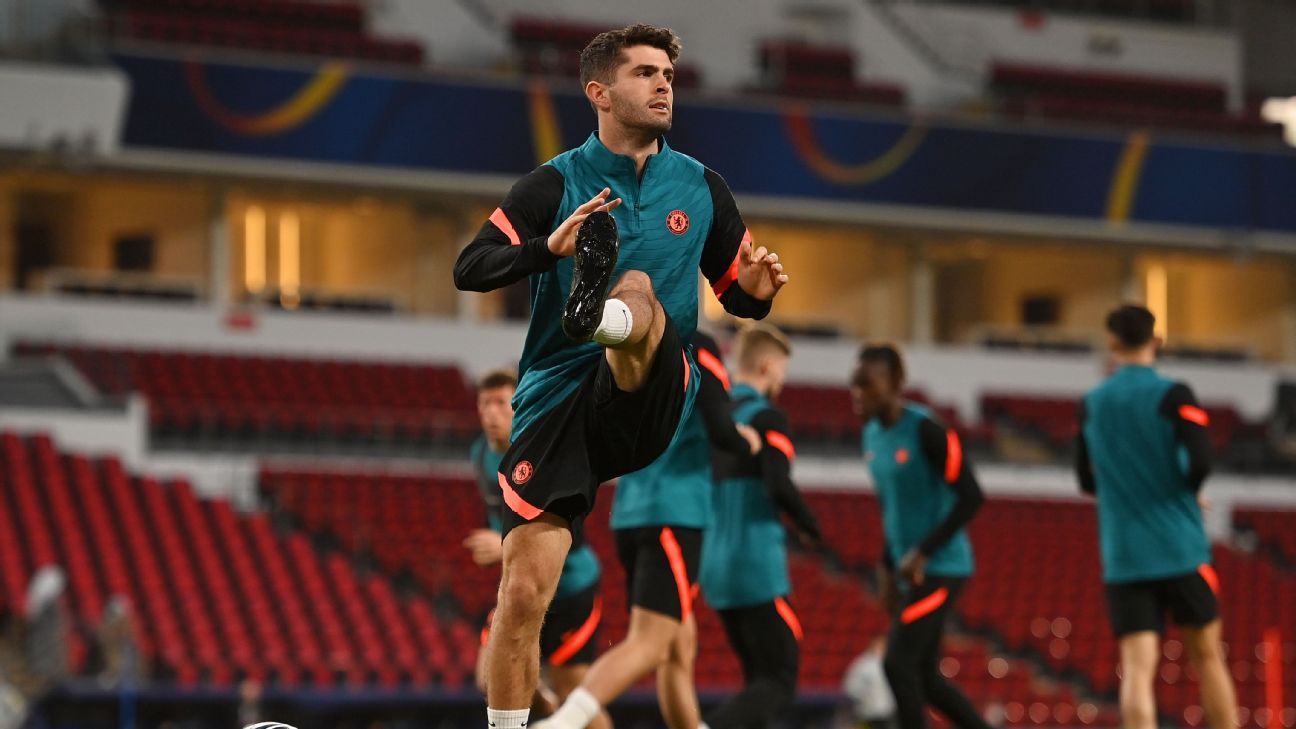 ABU DHABI, United Arab Emirates — Christian Pulisic is the youngest United States men’s national team player ever to appear in a World Cup qualifier, score a goal and captain the team. His transfer in 2019 from Borussia Dortmund to Chelsea was the most ever paid (a reported £58 million fee) for a North American player.

He is the youngest American to score in the UEFA Champions League (while at Dortmund) and was the youngest to appear and assist in the same competition until Giovanni Reyna did it, also with Dortmund; in Germany, Pulisic became the youngest U.S. international to win a major European trophy (the 2017 DFB-Pokal) before becoming only the second U.S. man in history to win the Champions League with the Blues last season.

It seems a shame, then, that he doesn’t ever allow himself to reflect on these personal milestones.

Now 23, Pulisic has moved into a different phase of his career, a shift he examines when sitting down with ESPN for an exclusive interview at Chelsea’s training base for the Club World Cup.

Fresh from lunch at the team’s Ritz Carlton hotel, Pulisic bumps fists before taking shelter from the stifling February heat to learn he stands on the brink of yet more history. Should Chelsea beat Palmeiras in Saturday’s final, the Hershey, Pennsylvania, native could become only the third American to win the Club World Cup, alongside Jovan Kirovski with Dortmund and Julian Green at Bayern Munich.

“I had no idea about that stat. I don’t know what to make of that. It is cool, it is an honour, but that’s not really why I play the game, for those personal goals, winning those kind of things,” he explains. “It is not really what matters to me.”

“Winning trophies at the club level,” he replies without hesitation. “Winning games and winning trophies as a team is what really matters for me. This last year has been incredible for example with the Champions League and now a chance to win this. That’s always the biggest thing.”

There is perhaps another reason why Pulisic is less concerned about his place in history: his place in Chelsea’s team is far less certain these days. Pulisic was an unused substitute in Wednesday’s 1-0 win over Al-Hilal, his inaction theoretically explained by a shortness of match fitness having been late to rejoin the group last week after enduring sub-zero temperatures in Minnesota, where the USMNT beat Honduras in World Cup qualifying.

The reality is different. “I was very ready to play [against Al-Hilal],” he said. “I wanted to play so of course I was upset that I didn’t.”

This rotation is threatening to become the story of Pulisic’s season. He has made just 10 starts across all competitions in a campaign delayed by an ankle injury that eventually ruled him out for three months from September to November.

“In that case, the injury was just more serious than I thought it was and I always tell myself ‘I want to back after this time or this time’ and when it doesn’t happen, it is tough on me,” he said. “But I probably need to set more realistic goals at times. I think the injury was a bit tougher than I anticipated it to be from the start so that’s why it took a bit longer but I’m back and healthy.”

Dan Thomas is joined by Craig Burley, Shaka Hislop and others to bring you the latest highlights and debate the biggest storylines. Stream on ESPN+ (U.S. only).

Put bluntly, some believe he is injury-prone, unable to trust a body undermined by a series of nagging problems.

“No, [that’s not the case], now I’m feeling good and I don’t worry about injuries when I play or anything like that,” he said. “There have been a lot of ups and downs. I have been on and off playing, different positions, kind of being moved around. It has been a tough ride for me personally, to be honest, and I am just trying to get back into some rhythm, get into the run of things.”

That’s where Thomas Tuchel comes in. There was an expectation that the German’s appointment in January 2021 would be an unalloyed positive for Pulisic given their prior relationship at Dortmund. Although Tuchel has often spoken positively about Pulisic, it hasn’t always reflected in his team selections. Pulisic told “The Crack” podcast in August that “it’s funny because people just assume that because you had a coach in the past, then it’ll be perfect for you; it’ll be great… it doesn’t necessarily mean that.”

“He gave me my debut at Dortmund, of course,” said Pulisic. “I was always very thankful for that. I think we have accomplished a lot together so we have that going together. What I’m saying there [in that podcast] is what it is. You are not always going to get along the best or whatever, but I think we have had a good enough relationship where we’ve been able to accomplish things together and I’ve been able to play at times. Now, I’m hoping to get back on that streak.”

It’s possible his adaptability counts against him. Pulisic has been tried as a No. 10 in Tuchel’s preferred 3-4-2-1 formation, but also as a false nine and even as a wing-back.

“I don’t think it is a bad quality necessarily to be versatile but for whatever reason, I haven’t been given the full chance to be in one position and gain some rhythm which is hard at times, which I would like at times, but it is part of the sport I guess,” said Pulisic.

Tuchel seems to increasingly favour Kai Havertz and Hakim Ziyech as Romelu Lukaku‘s principal supply lines, inevitably increasingly speculation over Pulisic’s long-term future. His contract expires in the summer of 2024, and clubs as shrewd as Chelsea usually begin negotiations as the two-year mark appears on the horizon to tie players down. Have those talks begun?

“No, I think I’m very focused on what’s going on with the team right now,” replies Pulisic. “I’m not thinking about that too much at the moment. Right now, I’m focused at Chelsea and I’m enjoying it. I’m just trying to help the team to win games at the minute.”

The next challenge is to become world champions. It is the one trophy Chelsea have never won, losing their only previous final appearance in 2012.

“Maybe it doesn’t seem as big of a tournament in Europe as it does to some of these other places but for us, we are taking it seriously,” said Pulisic. “For us, it is another trophy that we 100% want to win. You have to win the Champions League to get here, and now we have the ability to play a semifinal and a final.

“Once you are here, especially when you see everything going on and there’s a trophy at hand, everyone’s one board and we definitely want to win.”

Victory would, of course, be another landmark moment for Pulisic. “I want to win this tournament, not because I’m going to be the third American,” he said. “But just because I’m here with the team and we want to win.”

Government running out of prison places and has to ask police for 400 cells
‘It’s a dirty game’: Prince Harry says only he and Meghan know the ‘full truth’ in new trailer for docuseries
Schiff fires back after McCarthy threatens to remove him from intel committee
Neil deGrasse Tyson explains what NASA’s discovery means for life beyond Earth
Hear what Herschel Walker said about his residency