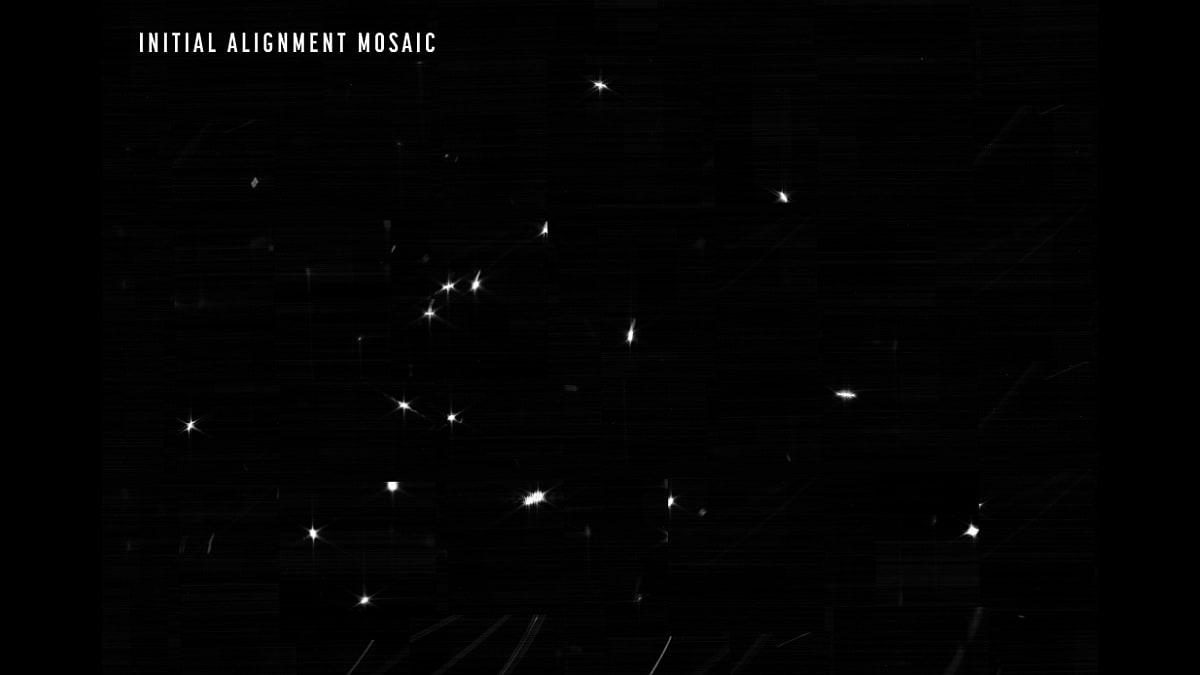 The James Webb Space Telescope has spotted its first star and captured a selfie, NASA announced Friday. The steps are part of the months-long process of aligning the observatory’s enormous golden mirror that astronomers hope will begin unraveling the mysteries of the early Universe by this summer. The first picture sent back of the cosmos is far from stunning: 18 blurry white dots on a black background, all showing the same object: HD 84406 a bright, isolated star in the constellation Ursa Major.

However, it represents a major milestone. The 18 dots were captured by the primary mirror’s 18 individual segments — and the image is now the basis for aligning and focusing those hexagonal pieces on the James Webb Space Telescope.

The light bounced off the segments to Webb’s secondary mirror, a round object located at the end of long booms, and then to the Near Infrared Camera (NIRCam) instrument — Webb’s main imaging device.

“The entire Webb team is ecstatic at how well the first steps of taking images and aligning the telescope are proceeding,” said Marcia Rieke, principal investigator for the NIRCam instrument and regents professor of astronomy, University of Arizona, in a statement.

“We were so happy to see that light make its way into NIRCam.”

The image capturing process began on February 2, with Webb pointing at different positions around the predicted location of the star.

Though Webb’s initial search covered an area of the sky about equal to the size of the full Moon, the dots were all located near the center portion, meaning the observatory is already relatively well positioned for final alignment.

To aid the process, the team also captured a “selfie” taken not through an externally mounted camera but through a special lens on board NIRCam.

NASA had previously said a selfie wasn’t possible, so the news comes as a welcome bonus for space fans.

“I think pretty much the reaction was holy cow,” Lee Feinberg, Webb optical telescope element manager, told reporters in a call, explaining that the team wasn’t sure it was possible to obtain such an image using starlight alone.

The $10 billion observatory launched from French Guiana on December 25 and is now in an orbit that is aligned with the Earth’s around the Sun, one million miles (1.5 million kilometers away) from our planet, in a region of space called the second Lagrange point.

Webb will begin its science mission by summer, which includes using its high-resolution instruments to peer back in time 13.5 billion years to the first generation of galaxies that formed after the Big Bang.

Visible and ultraviolet light emitted by the very first luminous objects has been stretched by the Universe’s expansion, and arrives today in the form of infrared, which Webb is equipped to detect with unprecedented clarity.

Its mission also includes the study of distant planets, known as exoplanets, to determine their origin, evolution, and habitability.

This article was originally published by Ndtv.com. Read the original article here.

Police search around-the-clock for suspect in brutal kidnapping
Simpsons episode where Homer goes on strike shown by Channel 4 on ‘Walkout Wednesday’
NHS walkouts ‘badge of shame for government’, says Starmer
‘I don’t know how I am coping’
Grammy Awards: Five things to look out for on music’s biggest night