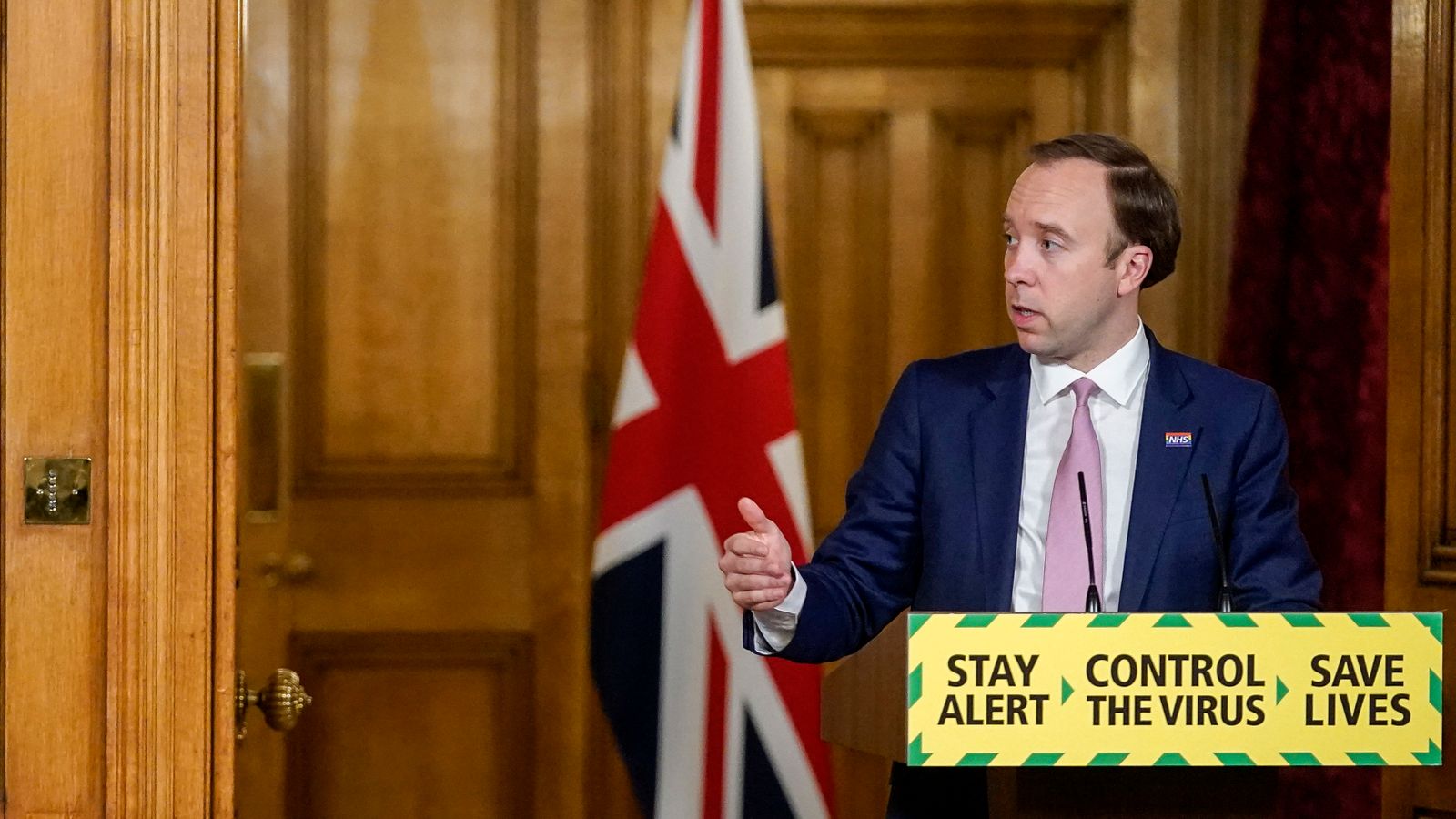 Former health secretary Matt Hancock did not comply with a public sector equality duty when making appointments to top health jobs during the COVID pandemic, the High Court has ruled.

In a judgment issued on Tuesday, it was found that Mr Hancock failed to comply with the duty when appointing Conservative peer Baroness Dido Harding as the interim chief of a new public health body.

The former cabinet minister was also found to have not complied with the duty in the appointment of Mike Coupe, the former chief executive of Sainsbury’s, as director of testing for NHS Test and Trace.

The High Court case was brought by the Runnymede Trust, an independent race equality think-tank, and was joined by the Good Law Project, a non-profit organisation that has fought a series of cases against the government’s actions during the coronavirus crisis.

The public sector equality duty compels public bodies to have due regard to the need to advance equality of opportunity between people who share a protected characteristic, such as age, race, religion or sex, and those who do not.

Baroness Harding is the former head of NHS Test and Trace who was also appointed as the interim chief of the National Institute for Health Protection, a new health body to replace Public Health England, in August 2020.

The Tory peer is the wife of Conservative MP John Penrose, who is Prime Minister Boris Johnson’s anti-corruption champion.

Mr Coupe led Sainsbury’s for almost six years and took over as director of testing at NHS Test and Trace in September 2020.

His spell at the supermarket is best remembered for him having to apologise for being caught on camera singing “we’re in the money” during TV interviews to explain details of a planned merger with Asda.

Baroness Harding and Mr Coupe are former colleagues, having both previously worked at Sainsbury’s.

The High Court found that the appointment processes leading up to the government’s decisions to hire Baroness Harding and Mr Coupe were “in breach of the public sector equality duty”.

In their judgment, Lord Justice Singh and Mr Justice Swift said: “For those reasons we will grant a declaration to the Runnymede Trust that the secretary of state for health and social care did not comply with the public sector equality duty in relation to the decisions how to appoint Baroness Harding as interim executive chair of the NIHP in August 2020 and Mr Coupe as Director of Testing for NHSTT in September 2020.”

“It shows the importance of the public sector equality duty and its role in protecting the people of this nation from the closed shop of government appointments, not least in a time of national crisis where people from our minority communities were dying from COVID in hugely disproportionate numbers,” she said.

“Across the country, there are countless talented and well qualified public health specialists and administrators who could have successfully fulfilled the roles handed to Baroness Harding and Mr Coupe.”

The High Court ruled the claim brought by the Runnymede Trust over COVID appointments failed on two other grounds.

The claim brought by the Good Law Project was ruled to have failed “in its entirety”.

A spokesperson for Mr Hancock said: “What the judgement does make clear is that ‘the claim brought by Good Law Project fails in its entirety’, therefore highlighting the fact this group continues to waste the court’s time.

“The court judgment also states that ‘the evidence provides no support…at all’ for the allegation that Dido Harding secured senior positions on the basis of ‘personal or political connections’ in the government.

“They accept these ‘were urgent recruitment processes which needed to find highly specialised, experienced and available candidates within a short space of time’.

“Let’s not forget, we were dealing with an unprecedented global pandemic, where time was of the essence in order to protect and save lives.”

Labour deputy leader Angela Rayner called for the promised public inquiry into the COVID pandemic to “begin right now” so that it can “uncover exactly how this government made decisions in a national emergency”.

“Boris Johnson and his cabinet seem to find themselves on the wrong side of the law time after time,” she said.

“From crony contracts to ministers’ mates landing top jobs, it’s always the public who pay the price for Tory sleaze.

“This time they have failed in their duties to those from disabled and Black, Asian and minority ethnic communities.”