Russian President Vladimir Putin has insisted he “of course” does not want a war in Europe amid conflicting claims he had withdrawn some his country’s forces from Ukraine’s borders.

Speaking at a news conference following talks with German Chancellor Olaf Scholz, Mr Putin stressed he was not keen on a military confrontation.

He also suggested that there was the opportunity for further talks between Moscow and the West in a bid to ease current tensions.

“Of course we don’t want it [war],” Mr Putin said after his discussions with Mr Scholz in Moscow, according to one translation.

“This is exactly why we put forward the proposal to start the negotiation process where the result should be an agreement of ensuring equal security of everyone, including our country.

“Unfortunately there was no constructive response to this proposal.

“Nevertheless we come from a position that even in the documents that were forwarded to us from NATO and Washington there are elements that can be discussed.

“But these need to be discussed comprehensively with all basic issues that we have highlighted today.”

The Russian president said his country was ready for talks with NATO and the US on limits for missile deployments and military transparency.

But Mr Putin also reiterated his provocative claim that the situation in east Ukraine’s Donbass region, where Russian-backed rebels have been fighting Ukrainian troops since 2014, resembled “genocide”.

‘War in Europe is inconceivable’

Mr Scholz had told the news conference that “war in Europe is inconceivable” and said a deescalation of Russia’s military build-up along Ukraine’s borders was “essential”.

He also welcomed Moscow’s announcement earlier on Tuesday that some units participating in military exercises would begin returning to their bases.

“We have not yet exhausted diplomatic solutions,” Mr Scholz said. “We need to make sure to work towards a peaceful solution of the conflict.

“We have heard that some troops are being withdrawn – that is a good sign and we hope more troops will be withdrawn.

“We are prepared to talk about very concrete steps in order to ensure peace and security.”

However, NATO general secretary Jens Stoltenberg had earlier dismissed the suggestion that Russia was withdrawing some of its forces from Ukraine’s borders.

“We have not seen any deescalation, any withdrawal of Russian troops and equipment,” he told Sky News.

“We have not seen any withdrawal or deescalation on the ground, but we will continue to monitor it very closely.

“We will follow what they are doing and we call on them to deescalate.

“It’s not too late for Russia to remove forces, to start to engage in real efforts to find a political solution and to stop the preparations for aggressive action.” 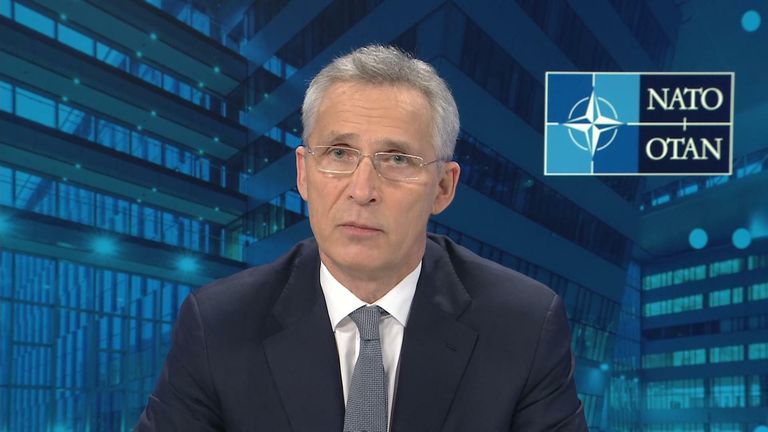 ‘This is an unprecedented military build-up’

In his Sky News interview, Mr Stoltenberg hit out at Moscow’s “unjustified and unexplained” military build-up around Ukraine, which has seen around 130,000 Russian troops assembled near the country’s neighbour.

“Of course every nation has the right to exericse their own troops on their own territory – that’s absolutely acceptable,” the NATO boss added.

“But this is not a normal exercise. This is their biggest concentration of combat forces in Europe since the end of the Cold War.

“They are close to Ukraine’s borders, they are also partly inside Ukrainian territory in Crimea and also in Donbass.

“This is unprecedented and they have all the enablers in place to launch a full-fledged invasion with hardly any warning time at all.

“So this is an unprecedented military build-up, it is unjustified and unexplained combined with threatening rhetoric.

“Because what they have said is, if we don’t give in to the Russian demands, then there will be what they call ‘military technical consequences’.”

Politicians are not offering a comprehensive solution on how to fix the NHS
Naftogaz CEO says the Ukrainian state energy giant will be out of default soon
Hear what investigators found inside Idaho suspect’s home
Exclusive: China ‘likely’ to invade Taiwan in 2027
Microsoft users hit with global cloud outage that impacted products like Teams and Outlook