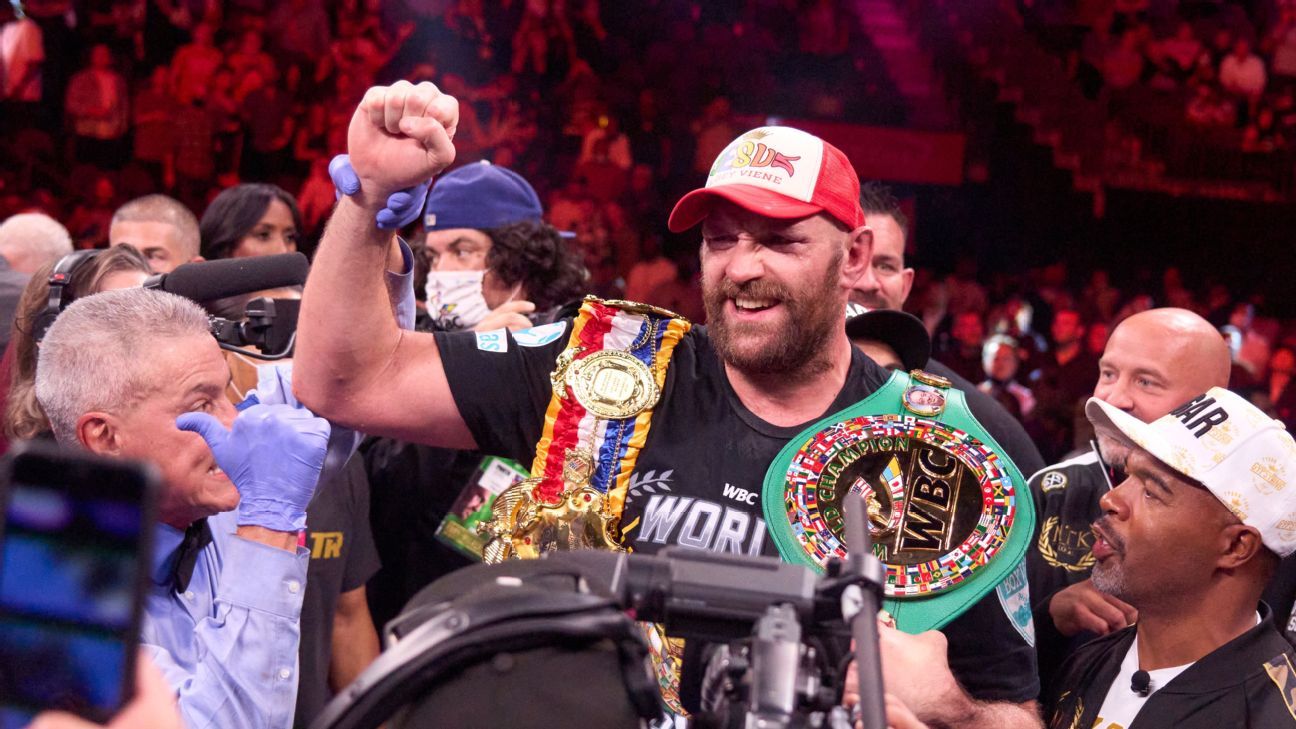 The first two months of the 2022 boxing schedule featured returns for several notable fighters — Keith Thurman and Daniel Jacobs among them — but lacked marquee matchups.

The next two months on the calendar are when boxing truly begins to heat up with some of the biggest names in the sport on the slate. Roman “Chocolatito” Gonzalez and Julio Cesar Martinez kick off the unofficial start of the new boxing season on March 5 with what should be a scintillating bout that projects as an early front-runner for fight of the year.

Two weeks later, Jermell Charlo and Brian Castano will run it back in a second attempt to crown an undisputed junior middleweight champion for the first time in boxing’s four-belt era.

April brings yet another comeback for Errol Spence Jr., who fights for the first time since late 2020 against Yordenis Ugas. Ugas is brimming with confidence following his upset victory over Manny Pacquiao in August, and the fight will unify three of the welterweight world titles. Later in the month, Tyson Fury will defend his heavyweight championship against Dillian Whyte in London.

The May schedule is still being sorted, but we already have a pretty good idea of some of the matchups being eyed for that month too, including the return of undisputed super middleweight champion Canelo Alvarez

With all of the great fights to come, let’s take an early glimpse at the best upcoming boxing bouts:

This matchup was an easy choice for the top spot. After all, this is the heavyweight championship, and Fury is undoubtedly the second-biggest star in boxing (after Alvarez).

Fury’s 11th-round KO of Deontay Wilder in October was an instant classic, and the fight with Whyte figures to be another barnburner. Whyte packs plenty of punch and can dig to the body. Whyte will be an underdog for good reason, but he has proved to be one of the best heavyweights in the world, with wins over Joseph Parker and Derek Chisora. Whyte is rated No. 6 by ESPN.

Whyte’s been waiting a long time for his shot as a WBC mandatory challenger. He talks a big game, too, and that helps shape up as a heated promotion, one Fury already started with plenty of his trademark barbs. The location adds another layer of intrigue. The fight is expected to land at London’s Wembley Stadium, which holds approximately 90,000 fans. Whyte hails from England — as does Fury, who hasn’t fought in his homeland since 2018.

With the winner in line to fight Oleksandr Usyk or Anthony Joshua later this year for all four heavyweight belts, the stakes couldn’t be higher.

Spence is here to remind us he’s still one of the best fighters in the world — again. He survived a serious car crash in late 2019 and rebounded with an impressive decision win over Danny Garcia in December 2020. This time, Spence returns from surgery to repair a detached retina in his left eye.

The injury forced Spence to withdraw from an August fight with Pacquiao, and it was Ugas who replaced him. Ugas capitalized on the opportunity. He accepted the assignment on 11 days’ notice and went on to defeat the future Hall of Famer by decision in convincing fashion.

Now the Cuban carries all that momentum into a high-stakes showdown with Spence for three 147-pound titles. The winner will separate himself from Terence Crawford (for now) as the No. 1 welterweight in the world, and hopefully set up a future fight with Crawford for the undisputed championship.

Spence will be favored to remain undefeated, but Ugas has proved in fights with Shawn Porter and Pacquiao that he shouldn’t be taken lightly. The Showtime PPV will be Spence’s third fight at AT&T Stadium, the home of the NFL’s Dallas Cowboys.

The rematch hasn’t been finalized yet, but it’s simply a formality once the date and location are sorted. After Usyk surprisingly dominated Joshua to claim his three heavyweight titles, AJ quickly exercised the rematch clause.

Joshua is expected to enter the ring with a new trainer, and he’ll surely be counted out by many following his previous performance. Sure, Joshua exacted revenge on Andy Ruiz Jr. following a TKO loss, but this is a different situation entirely.

Usyk isn’t going to underestimate Joshua or slack in the gym, like Ruiz did. The former undisputed cruiserweight champion was an underdog heading into the first fight because of his lack of résumé at heavyweight rather than his skill set.

Usyk proved that his performance against Chisora in his first heavyweight fight was an anomaly, and against Joshua, Usyk resembled the same fighter who dominated the cruiserweights. He beat Joshua to the punch consistently and gave him fits with his jab and movement.

Usyk even seemed on the verge of stopping Joshua late in the fight. This time around, AJ will have to fight far more aggressively and use his superior size to his advantage. If he can’t, Usyk will be the one fighting for heavyweight supremacy in the near future.

The first meeting between Charlo and Castano was fantastic, a July 2021 bout that featured numerous momentum swings and plenty of controversy. It appeared Castano controlled the action most rounds with his relentless pressure, but the Texas judges ruled the fight a split draw.

This time around, Charlo won’t have the benefit of the hometown fans (the encore encounter is in Los Angeles). However, Charlo is 1-0 in rematches. He dropped a controversial decision to Tony Harrison in 2018 but avenged the defeat via TKO one year later.

If Charlo is going to turn the tables once more, he’ll have to adjust much more than the last time. Castano’s aggressive style gave Charlo fits and the Argentine proved he could absorb Charlo’s best shot.

The boxing world didn’t welcome another undisputed champion last summer, but the rematch should provide clarity at 154 pounds.

Canelo picked Bivol over an opportunity to defend his undisputed 168-pound championship against Jermall Charlo on the same date, and this could be the tougher assignment.

Bivol is long, possesses an excellent jab and knows how to place his shots. He’s also bigger. ESPN ranks him the No. 2 boxer at 175 pounds. The Russian likes to play it safe from the outside, so Alvarez will have to use pressure to outwork Bivol on the inside.

The matchup presents another chance for Alvarez to claim a light heavyweight title. In his lone fight at 175 pounds, Alvarez struggled with Sergey Kovalev before he scored a brutal 11th-round KO.

A win for Alvarez would also set the stage for the long-awaited trilogy matchup with Gennadiy Golovkin, but this time, for undisputed status at 168 pounds. A victory over Bivol would also prove, once again, that Canelo is the unquestioned No. 1 pound-for-pound fighter in the sport, a man who isn’t bound by weight classes.

Sure, it’s disappointing that we won’t see the trilogy fight between “Chocolatito” and Juan Francisco Estrada on March 5, but what a consolation prize this is.

Martinez is the WBC flyweight champion and ESPN’s No. 1 boxer in the division. His explosive punching power combined with a frenetic fighting style have established him as one of the sport’s most reliable action fighters. Gonzalez, of course, is a future Hall of Famer who is always in fun-filled brawls. His rematch with Estrada last year was one of the best bouts of 2021; they broke the CompuBox record for punches thrown in a fight at 115 pounds with over 2,500 combined shots.

Martinez, too, is known for letting his fists fly, and chances are he will do the same in his greatest opportunity for exposure in his career to date. A victory over the legend, and Martinez will shoot to stardom at the lower weights. For Gonzalez, it’s a chance to add another chapter to his storied legacy and preserve the value and interest in a trilogy fight against Estrada.

Stevenson is one of the most talented young fighters in boxing, and he has another chance to showcase his skills on the big stage against Valdez. Following a breakout performance against Jamel Herring in a TKO victory in October, Stevenson will look to grab a second 130-pound title.

Valdez is undoubtedly Stevenson’s toughest test yet, but Stevenson could prove to be a stylistic nightmare for the champion from Mexico. Stevenson has an excellent jab and can move with the best of them. Valdez will be looking to rebound after a lethargic win over Robson Conceicao in September that followed Valdez testing positive for a banned substance.

Valdez has never lost, but he has been dropped. If Stevenson can finish him off inside the distance, it would be a big statement and a warning to the rest of the division as well as the elite fighters one division up, at lightweight.

The women, at long last, receive the spotlight in perhaps the biggest bout in women’s boxing history — undisputed lightweight champion Katie Taylor against seven-division champion Amanda Serrano. All the lightweight titles will be on the line, but more so, they’ll be fighting for pound-for-pound supremacy.

Better still, the fight will headline a card at the legendary Madison Square Garden in New York, and it figures to set the record (and a high bar moving forward) for live gate at a women’s fight. Promoters Eddie Hearn and Jake Paul are pushing the fight hard, and the action in the ring should be just as good.

Taylor loves to mix it up on the inside, while Serrano has dominated the competition with not just boxing smarts but raw power. It’s a coin-flip fight on the grandest stage, and could lead to even more exposure for women’s boxing moving forward.

Taylor outpointed Jose Ramirez in a thrilling May matchup to grab all four 140-pound titles, and now he finally makes his first defense against Catterall, after the planned December bout was rescheduled following a Taylor injury.

Taylor is one of the best boxers in the world (ESPN’s pound-for-pound No. 7 boxer) and this figures to be a clear victory for the Scot. Catterall is undefeated and skilled, but he’s unproven on this level.

Win or lose, this feels like it could be Taylor’s last fight at 140 pounds. He has shown interest in a welterweight campaign, and a shot at Crawford could materialize later this year. Crawford is a promotional free agent, and he, like Taylor, is advised by Daniel Kinahan — paving the way for a potential fight .

GGG is so close to finally landing a third fight with Alvarez, but he’ll have to push past Murata first. The bout was set for December in Tokyo, where Murata resides, but COVID restrictions in Japan at the time forced the fight’s postponement.

There’s no set date, but GGG-Murata is expected to take place in the spring, in a 160-pound unification between these two big punchers. Golovkin, once a pound-for-pound stalwart, hasn’t competed since December 2020 and turns 40 in April. Murata’s inactivity extends even longer: His last fight was in December 2019.

GGG will have to win, but he would also do well to do so in spectacular fashion to remind everyone he’s still a force and create buzz for the trilogy fight with Alvarez. Murata has been outboxed before, but will he rise to the occasion in his biggest fight yet? If so, he could play spoiler and end the prospect of Canelo-GGG 3 once and for all.

NATO set to agree biggest defences overhaul since the Cold War – including expansion of 40,000 strong response force
Why one stock brokerage is bullish on Reliance Industries and Infosys
West Bengal Startup Develops New Device That Can Produce Oxygen From Water
Exxon Mobil CEO cautions against an abrupt energy transition, warning underinvestment leads to high gas prices
Hear ex-CIA director’s prediction about who will win in Ukraine