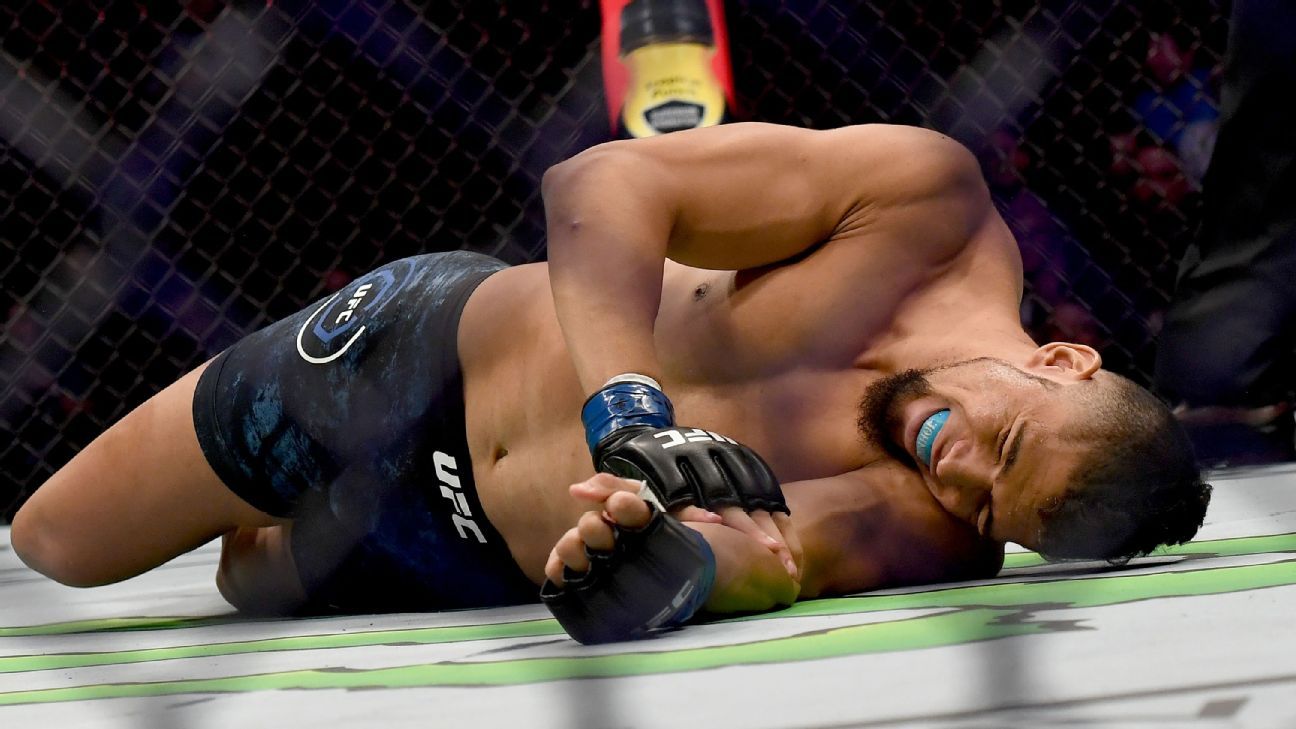 Editor’s note: This story was originally published before UFC 244. Walker’s next fight takes place on Oct. 2 against Thiago Santos.

Good luck finding a recent UFC fighter who’s had quite the rapid rise as that of Johnny Walker. The Brazilian has steamrollered all three of his UFC opponents with first-round stoppages. And after each dominant victory, MMA fans buzzed about his celebrations — including back-to-back “worm” dances.

But part of that buzz was bad news: After his March 2 TKO of Misha Cirkunov, Walker’s worm went awry when he hit the cage floor and injured his shoulder.

Johnny Walker: Before I ever did martial arts, I took a dance class. When you go to a party when you are young, you don’t know how to dance, and you are shy. When I was young in Brazil, I had to know how to shake my body. I start there — after dance, then I started martial arts.

Leonardo Gosling, Walker’s trainer: At the house, in front of the mirror, he’s always dancing. He likes music. Sometimes it’s weird, sometimes it’s funny. He likes many types and styles of music.

Walker: I always practice backflips in the gym, on the beach. I like them. So for my second fight in UFC, I did a crazy backflip celebration.

Gosling: He backflipped and didn’t land very well. And then he fell down and then he started to do the worm. It was like he came up with the worm because he didn’t land the backflip well.

This weekend’s UFC Fight Night features a loaded main card, topped by Kevin Lee and Charles Oliveira in the main event. There are three other bouts between fighters ranked in the top 15 by the UFC, including Demian Maia vs. Gilbert Burns in the co-main event, Amanda Ribas vs. Randa Markos and Johnny Walker vs. Nikita Krylov.

Walker: I had never practiced this. But I watched a funny video where somebody did this at a rave. My brother reminded me that sometimes in Brazil, at a party, I would do the worm.

Gosling: I said to him after, “Johnny, I don’t want to see you backflipping anymore. It’s dangerous. We have too much to lose if you get hurt.” He said, “Well, is the worm OK with you?” I said, “I think the worm is OK, it won’t hurt.” So what happened in the third fight is also my fault, not only his. He was complaining about his shoulder before the fight, it felt like he had sand inside, it was annoying him. But nothing that serious.

Walker: In my third fight, I won very quickly again. I still had a lot of energy and I just jumped and started the worm because it was the first thing that came into my mind. But I landed with my arms straight and my shoulder just popped out, maybe because I had some injury before, and I didn’t look after it.

Gosling: I saw right away by his body reaction and his face, and I said, “Oh, my God!” When I saw him lying on the floor, I was first to arrive. He said, “Oh Leo, I’m screwed, my arm is out.” I said, “Try to pretend nothing happened, because it will be very ugly if you can’t stand.” But Joe Rogan could see it — he could see the face expression.

Dominick Cruz, UFC fighter and broadcaster: Right when he fell, I knew he hurt himself because of the way he fell. He was full of adrenaline and fell forward. You don’t feel things the same when you have adrenaline. I have no analytical breakdown, other than he was hyped. And I can’t really blame him.

Walker: Everybody was saying, “How are you feeling now?” I said, “I feel OK, my shoulder will come back, but I have to see what the doctor says.”

Gosling: He recovered very fast. It was 2½ months and he was already sparring. Normally, the doctor said, after eight months, he’d be able to fight. But we got the doctor’s authorization saying he was free to fight.

Walker: I recovered in three months and then I have to train hard again to put my muscles back. Now I’m 100 percent.

Cruz: He trusts his instincts and I think he’s been very successful. You don’t really start having doubts until someone has you doubt yourself. He’s the equivalent of a guy who’s undefeated. The worm got him — but he didn’t actually do the worm, and that was the problem. That was just a freak accident.

Gosling: I’m asking him not to do it again. He said, “Come on, I need some celebration.” I said, “Man, do some meditation — just sit down and meditate. Something like that, please!”

Walker: When I win [Saturday], I will think about it. I don’t want to hurt myself again. I have practiced it very safely, very slowly. Everything is OK so far. You never know what can happen after you win the fight. You have a lot of emotions. I hope I can do something safe and don’t hurt myself again.