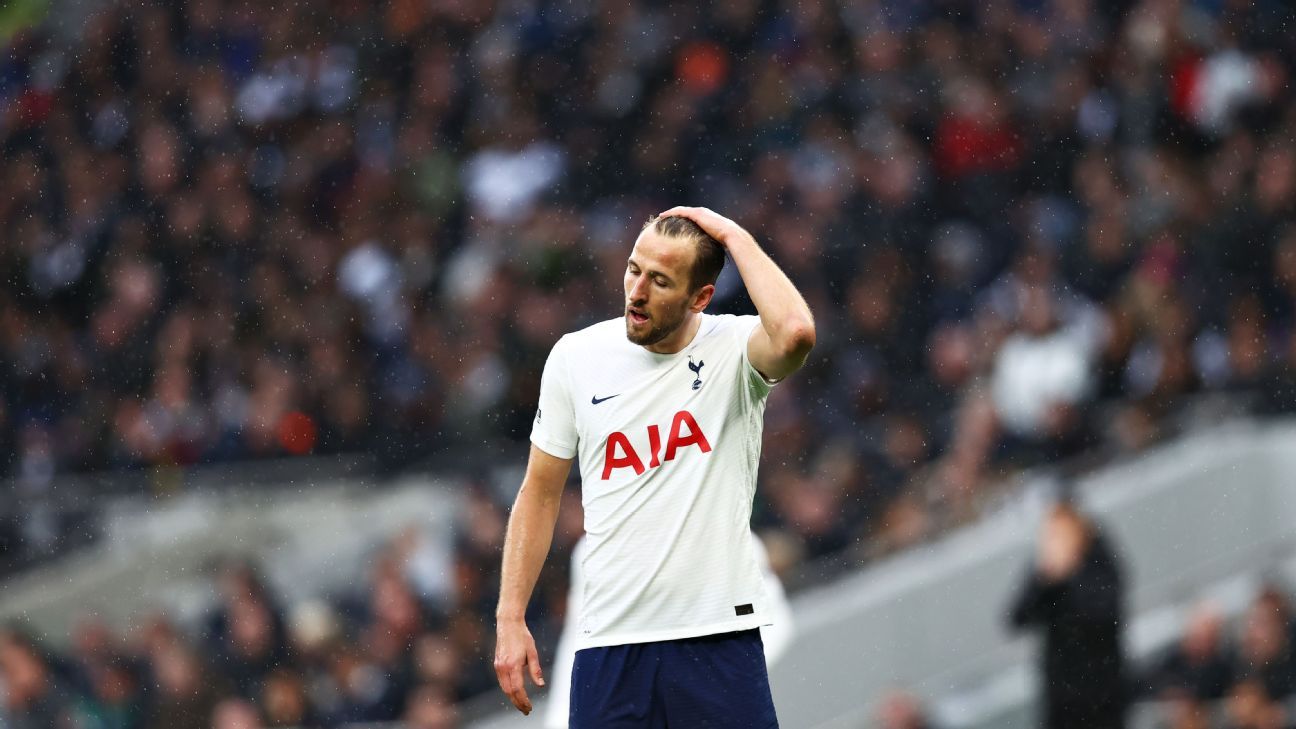 Harry Kane isn’t the sort of person to show it, but there will likely be a tinge of regret somewhere in his mind when Tottenham Hotspur‘s team bus pulls up at Etihad Stadium on Saturday.

The England captain attempted to push through a move to Manchester City last summer after informing Spurs of his desire to leave, subsequently declining to report for preseason training when originally scheduled as a deal remained in the balance. Mindful of the £100 million City had already paid Aston Villa to sign midfielder Jack Grealish, Tottenham chairman Daniel Levy wanted to get £150m for Kane’s services, given his greater experience and proven longevity as one of the Premier League’s finest scorers.

As fortune would have it, Spurs hosted City on the opening weekend of the season. Then-Tottenham boss Nuno Espirito Santo left Kane out altogether, and his team earned a surprise 1-0 victory that left City cursing their lack of a centre-forward and Spurs fans taunting their own talisman with chants of “Are you watching Harry Kane?”

Fast forward to mid-February 2022 and only the City fans can be gleeful. Pep Guardiola’s side have defied the lack of a recognised No. 9 to surge nine points clear at the top of the Premier League and reaffirmed their potency on Tuesday when thrashing Sporting CP 5-0 in their own stadium to all but seal a spot in the Champions League quarterfinals. Spurs, meanwhile, were knocked out at the group stage of Europe’s third-tier competition, the inaugural Europa Conference League, and have lost their last three Premier League matches to drop to eighth place, barely in the sort of form to maximise their games-in-hand and clamber back into the race for a top-four spot.

There are 27 points separating City and Spurs. Kane originally wanted to bridge this gap by moving clubs and a heavy defeat this weekend will only underline the gulf in class. So with City buoyant, Spurs in flux and Kane turning 29 in July, what happens next?

There were many reasons why Tottenham changed their stance towards hiring Antonio Conte as manager, but showing the sort of ambition that would convince Kane to stay was prominent among them.

Spurs held lengthy talks with Conte prior to appointing Nuno last summer, but negotiations collapsed when the Italian demanded a level of influence sources say made senior figures at the club uncomfortable. Nuno’s disastrous 17-game tenure left Spurs staring at the prospect of further decline after a summer in which Kane effectively suggested the club could not compete for major honours. And so they returned to Conte, willing to cede more control, specifically in deciding the composition of the squad.

This is important in the context of what happens next with Kane.

Dan Thomas is joined by Craig Burley, Shaka Hislop and others to bring you the latest highlights and debate the biggest storylines. Stream on ESPN+ (U.S. only).

Conte was keen to move on characters he believed had run their course at Tottenham: Dele Alli was allowed to join Everton on an initial free transfer (though the fee could reach £30m with performance-related add-ons), while Tanguy Ndombele, Giovani Lo Celso and Bryan Gil were also sent out on loan. Internally, this is viewed as the first phase of a summer overhaul in which Conte expects Tottenham to invest considerable sums in the market so they can mount a title challenge next season.

It looks a tall order on paper given the existing strength of City, Liverpool and Chelsea, but Conte stated as recently as the beginning of February that “my ambition is to win the Premier League” — such urgency will be music to Kane’s ears. It would, therefore, undermine everything Conte is trying to achieve if Spurs were to let their star player leave this summer.

Under financial pressure resulting from the COVID-19 pandemic, Inter Milan opted to make a profit on their main striker, Romelu Lukaku, by allowing him to join Chelsea for €115m just two years after signing him for €80m. Conte quit Inter as soon as he was made aware of the proposed cost-cutting, and there are some connected to Spurs who fear the 52-year-old could walk away from north London if Kane was moved on against his will. The pair are said to enjoy a good relationship, with Conte impressed by Kane’s professionalism having now seen him at close quarters. Sources claim Conte has told Kane he can improve him in a similar way to how he helped Lukaku flourish at Inter.

Kane will have two years remaining on his £200,000-a-week contract at the end of the season. Sources describe the striker as “being aware the clock is ticking” on his career given he turns 29 in July and is yet to win a major trophy for club or country. This desire for silverware was behind his push to leave last summer, and although the club took a dim view of Kane reporting back later than planned for preseason, he was described by multiple sources as diligent and focused once back with the first-team squad. Any suggestion of a January exit was quickly quashed and Kane was said to have been wholly focused on helping Spurs improve.

Whether Kane attempts to escalate his actions in an attempt to leave this summer remains to be seen. It’s worth remembering he did not hand in a written transfer request or officially go on strike to force a move, although Levy is one of the most fearsome negotiators around and would not automatically relent if faced with such circumstances. Levy is unlikely to drop his £150m asking price by much and for Conte to even consider letting Kane depart, a top-level replacement would have to be guaranteed — something easier said than done if Spurs miss out on Champions League football.

Saturday’s game will be an awkward reminder for Kane of what he could have been a part of. But the best way for him to take a step forward would be to deliver a match-winning performance: that would simultaneously improve Tottenham’s top-four chances, while also offering offer evidence of why City should revive their interest in him this summer.

Mark Donaldson and Janusz Michallik discuss how Tottenham is in good hands with Son Heung-min if Harry Kane was to leave Tottenham Hotspur.

Manchester City may focus on Haaland instead (Rob Dawson)

Judging by the 5-0 demolition of Sporting CP in the Champions League on Tuesday night, goals don’t seem to be a problem for Guardiola’s side. Top scorers in the Premier League — level on 61 goals with Liverpool — and approaching 100 goals in all competitions already, they are not struggling to find the net, though sources have told ESPN that signing a striker remains a priority ahead of the summer transfer window.

Kane was top of the list last summer, but Tottenham’s demands meant negotiations never got off the ground. Instead of switching targets, director of football Txiki Begiristain backed Guardiola to find a solution with the players already at his disposal, and so far, he has. Phil Foden was the centre-forward in Lisbon, while Raheem Sterling, Jack Grealish and others have all had a go.

City’s failure to sign a midfielder in 2018 and a centre-back in 2019 didn’t hurt too much either, but in both cases the issue was rectified a year later; Rodri arriving in 2019 and Ruben Dias in 2020. The expectation is that the club will return for a proven goal scorer ahead of next season, but sources have told ESPN that Kane has, for now, slipped down their list of options.

The England captain will be 29 in July and, given his contract at Spurs runs until 2024, he’d still command a huge fee. Borussia Dortmund‘s Erling Haaland, meanwhile, is seven years younger and has a release clause in his contract of €75m that becomes active this summer — a snip for a player of the Norway international’s potential.

There are complications with a deal for Haaland — notably interest from Real Madrid and Barcelona, along with City’s uneasy relationship with his agent, Mino Raiola — but should the striker decide to leave Dortmund then Begiristain and Guardiola will be at the front of the queue.

Even after paying £100m to sign Grealish, City have money to spend after the exits of Ferran Torres (£49.5m), Angelino (£17m) and Jack Harrison (£12m). There is a decision to be made about whether or not they need another holding midfielder — Fernandinho‘s contract expires this summer — but while West Ham’s Declan Rice has admirers at the Etihad, it’s unlikely to take precedence over a new striker. Highly-rated Argentina international forward Julian Alvarez, 22, was signed from River Plate in January for around £15m and sent back to the club on loan, but a decision is yet to be made about whether he will join Guardiola’s squad in the summer, or head out on loan again to pick up experience in Europe. Either way, he’s not expected to fill Sergio Aguero‘s boots anytime soon.

Sources have told ESPN that City will continue to monitor Kane’s situation at Tottenham, but Haaland’s potential availability is a blow if the England international still harbours hopes of getting out and joining City. Manchester United, and a possible reunion with former Spurs boss Mauricio Pochettino, is another potential avenue of escape, but for now at least, City’s focus is on challenging Real Madrid and Barcelona for Haaland’s signature if he’s available this summer.

Sunak survives first 100 days, but there is little warm glow around leadership | Beth Rigby
How US shot down China’s ‘spy balloon’ with a single missile – and what was likely on it
Zoo director accused of killing four pygmy goats and serving them up at a Christmas party
Biden’s response to the Chinese spy balloon is measured but anchored in reality
Inside the ‘Wormhole,’ Relativity Space’s monster factory 3D-printing reusable rockets