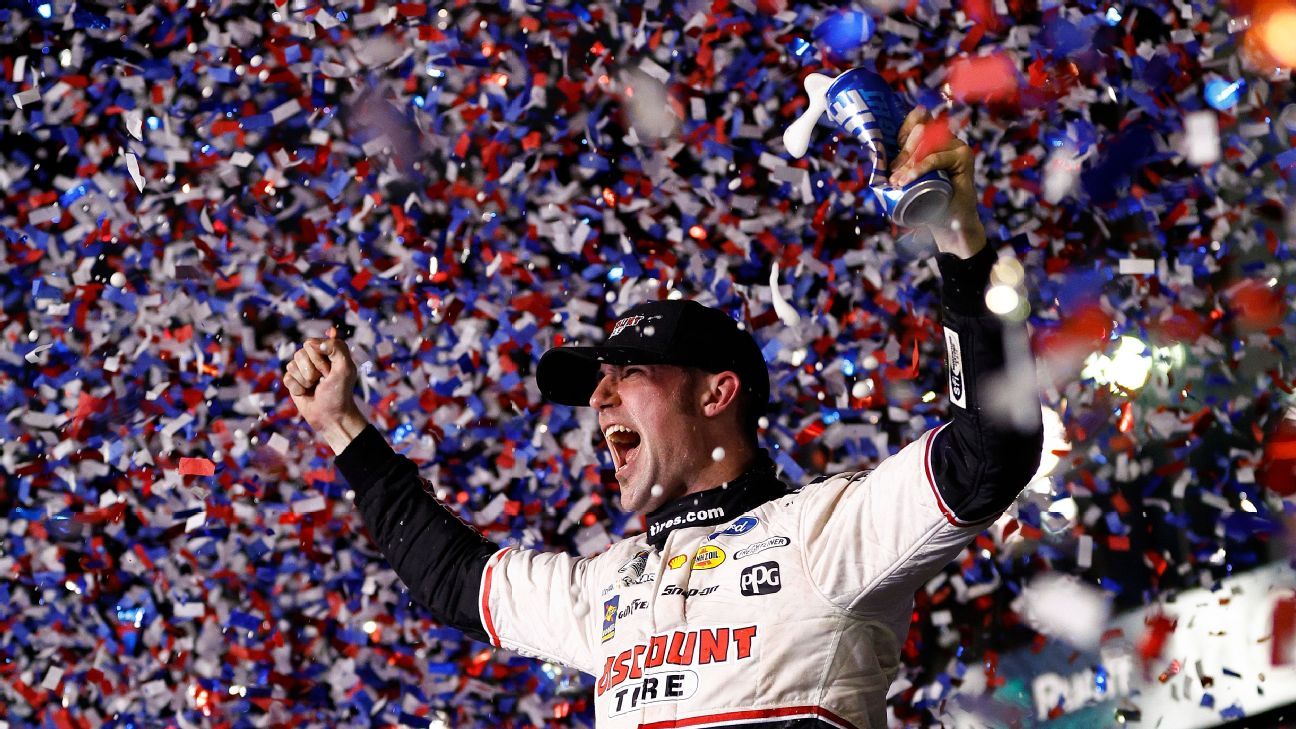 DAYTONA BEACH, Fla. — Who in the world is Austin Cindric?

As the 2022 Daytona 500 ground its way to the checkered flag, finally ending a 3½-hour enduro race that put a dozen cars behind the wall and saw 25 of the 40 cars in the field caught up in accidents (that’s just per the official box score, as pretty much every car ended the night with damage), the American auto race that draws more eyeballs than any other had a lot of people screaming at their TVs for the names they knew.

But Elliott finished 10th, Keselowski ninth, McDowell seventh and Busch sixth. Wallace, for the second time, came up one spot short of glory. The winner? A racer all those casual Daytona 500-only NASCAR viewers likely had never heard of. Now they have.

So, who in the world is Austin Cindric? He’s the 2022 Daytona 500 champion, that’s who. But don’t be ashamed or confused if you’d never heard of him before Sunday night. Avid NASCAR fans have been hearing about him since he was a kid. But for the rest of you, here’s the what-you-need-to-know now that he’s made himself known.

Cindric is funny. “I didn’t pack an extra pair of underwear and now I have to go do media for a few days, so I must not have been that confident today.” Cindric talks super-fast. He said that last underwear sentence in 1.2 seconds flat. He loves his mom. “She’s the backbone of my career. She made brownies for my crew and she tucked me in still in my firesuit after I’d wrecked out for the third race in a row.”

He is a 23-year-old NASCAR Cup Series Rookie of the Year candidate. That’s right, he’s a rookie. On Sunday, he was making his eight Cup start. Ever. When they engrave his name onto the Harley J. Earl Trophy, he will be there by doing something only nine of the 64 drivers listed on the award have accomplished before, earning his first career Cup Series victory in the sport’s biggest event.

He won the 2020 championship in NASCAR’s second-largest national circuit, the Xfinity Series, and came within .03 seconds of winning a second consecutive title last fall. In 133 career Xfinity starts, he earned 13 wins and finished in the top ten 66% of the time. That’s good. Like, very good.

Cindric has always been good behind the wheel. So good that he has managed to outrun, for the most part anyway, grumblings of a silver spoon racing life, the beneficiary of NASCAR nepotism.

You see, his father is Tim Cindric, the longtime president of Team Penske. That’s the team Austin Cindric drives for. His maternal grandfather, Jim Trueman, was a longtime IndyCar team owner, winning the 1986 Indy 500 with driver Bobby Rahal, less than two weeks before Trueman died of cancer, 12 years before Austin was born. His paternal grandfather, Carl Cindric, was a Gasoline Alley staple, building legendary Offenhauser engines.

If you carefully scan photos taken in the Indy 500 winner’s circle in the early 2000’s, you can catch glimpses of a little Austin Cindric running around. He famously nearly knocked over the Borg-Warner Trophy during a Helio Castroneves photo session at Indy’s yard of bricks.

But not only was he not escorted into a top-shelf ride by his father, dad tried to talk him out of racing at all.

“I always told him that there was never going to be a parachute from mom and dad,” Tim Cindric said Sunday night. “He was probably ten years old and racing really wasn’t the road I wanted him to take. I told him when he was in high school that we’d been able to help him up to then, but he was going to have to go to college or if he went racing, he’d have to find his own way in racing.”

Roger Penske, the 18-time Indy 500-winning and now three-time Daytona 500-winning team owner, confirmed that story as fact. But he also recalled seeing kid Austin playing with racecars in his bedroom back home in Ohio. And he remembered when preteen Austin earned his first win in the Bandolero Series. Penske and longtime righthand man Walt Czarnecki weren’t there for that first win, but they showed up the next week and he won again.

“I have known him his whole life and seen him grow up. He’s family,” said Penske, who also celebrated his 85th birthday Sunday. “But I think that anyone who knows me also knows that I’m not in the business of just putting people in race cars because I know them, or I am close to them. They have to perform, plain and simple. He has performed. If we didn’t put him in one of our cars, someone else would have done it.”

“He has been the most influential person in my life outside of my parents, and that’s not about racing,” Cindric said of the boss, whom he quickly said was not just that, his boss. “It’s how he treats other people. It’s how he treats his family. I learn from him all the time. To earn his trust to drive his cars, it’s the greatest compliment I could ever have.”

Cindric raced sportscars. He won a Truck Series race in 2017. Then he got a shot in the Xfinity Series ride and he wasn’t great. “If you had come to me in 2018 after I spun out in front of the entire Xfinty field (at Watkins Glen) and said, ‘Hey, one day you’ll win the Daytona 500!’ I would have said, bulls—.”

It took him 54 tries to finally win a race. Then he won 12 times over the next 79 races. When Keselowski, who hired Cindric to drive for his Truck Series team, left Team Penske after the 2021 season to become a driver-owner with Roush Fenway Keselowski Racing, Penske decided to put Cindric in the legendary No. 2 Ford, made famous by Rusty Wallace, Kurt Busch and Keselowski.

“Yes, he’s had a lot of opportunities,” Cindric’s crew chief, Jeremy Bullins, explained Sunday night. “When he’s gotten opportunities, he taken advantage of it. He’s won. He studies. He works so hard.”

It brings to mind a great quote many years ago from Richard Petty, who got his first Cup Series ride via his NASCAR Hall of Fame father Lee and then went on to put his own son and grandson in cars raced under the family banner: “That race car couldn’t care less what your last name is or who your daddy is. You can either drive it or you can’t.”

Austin Cindric can drive it. Those who closely follow and make their living in motorsports, they already knew that. So did Roger Penske. Now, the whole world knows it.

“I’m not an externally motivated person or externally intimidated person,” he said Sunday night when asked about those who have whispered about advancement coming because of his last name. “My head’s in the game pretty much 24/7. I don’t think about anything else but racing. I don’t have much of a social life. I just go the raceshop… if there’s anything left to prove, I’m not sure what it is.”