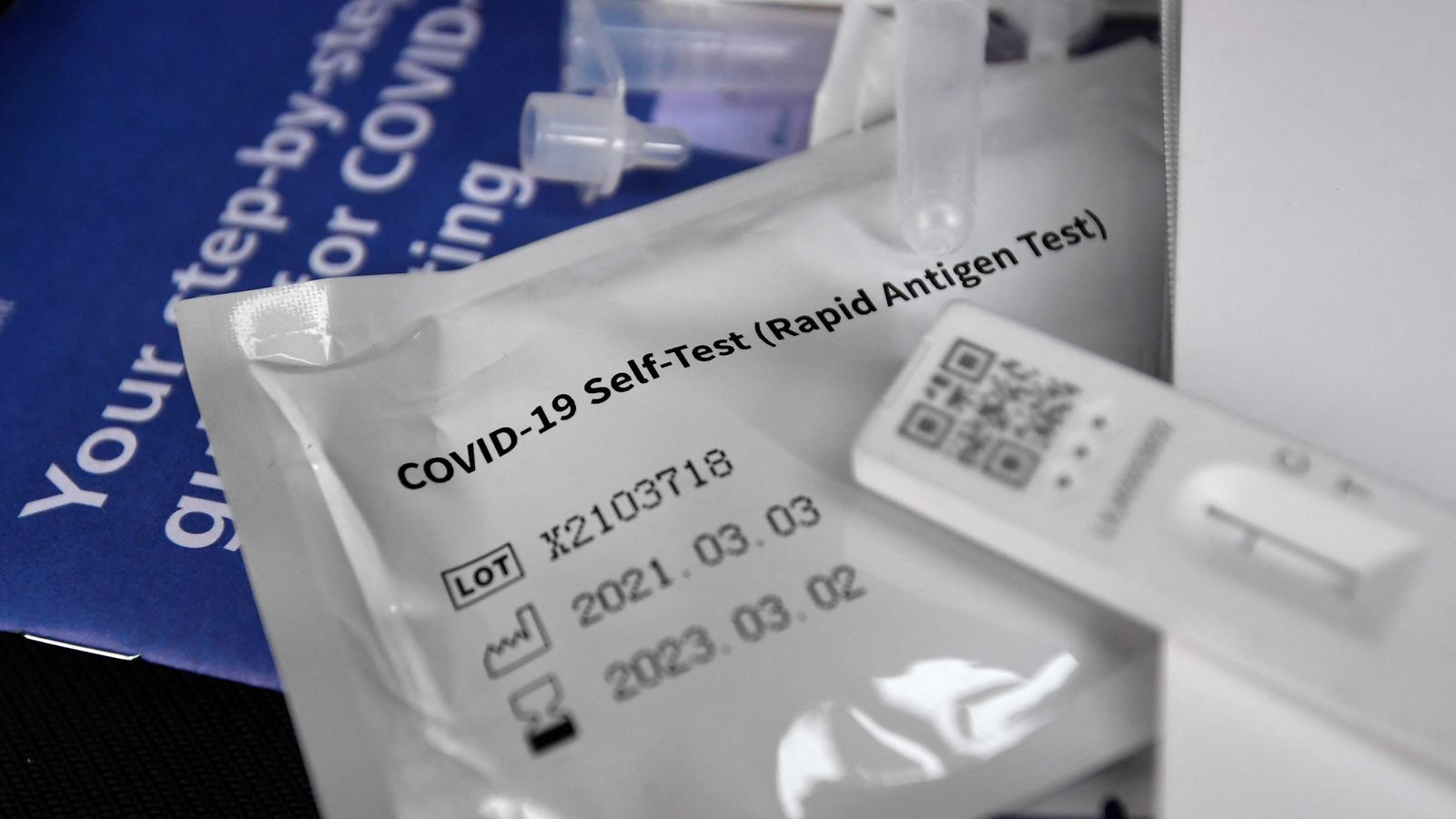 The legal requirement for people who test positive for coronavirus to self-isolate will be removed from Thursday and free symptomatic and asymptomatic testing will end in England from 1 April, the PM has announced.

Boris Johnson confirmed the move as he unveiled his government’s plan for “living with COVID” in the Commons.

The changes will be subject to approval by Parliament.

In an attempt to ensure people do not build up personal stockpiles of free lateral flow tests before the 1 April cut-off, individuals can now only order a box every three days, instead of every 24 hours.

Live COVID updates as fourth jab to be offered to over 75s, care home residents and the vulnerable

Timeline of end of COVID restrictions

From today:
• Guidance for staff and students in most education and childcare settings to undertake twice weekly asymptomatic testing removed
From 24 February:
• Adults and children who test positive will still be advised to self-isolate but the legal requirement will be removed
• Vaccinated contacts of positive cases will no longer be asked to test for seven days
• There will no longer be a legal requirement for close contacts who are not vaccinated to self-isolate
• Contact tracing will also come to an end
From 24 March:
• COVID provisions attached to statutory sick pay will be removed
• Wider guidance on workplace safety that been changed for COVID will be updated
From 1 April:
• Free universal testing will be scrapped and will instead be targeted at the most vulnerable
• Government officials expected the cost of a box of seven lateral flow tests to settle at around £20
• The use of voluntarily COVID status certification will also no longer be recommended

Outlining his plan for “living with COVID”, the PM said the country is now in a position to move from “government restrictions to personal responsibility”.

“Before we begin I know the whole House will join me in sending our best wishes to Her Majesty the Queen for a full and swift recovery. It is a reminder that this virus has not gone away,” the prime minister told the Commons.

“But because of the efforts we have made as a country over the past two years, we can now deal with it in a very different way, moving from government restrictions to personal responsibility, so we protect ourselves without losing our abilities and maintaining our contingent capabilities so we can respond rapidly to any new variant.”

On the end of universal free testing, the prime minister told MPs that the “biggest testing programme per person of any large country in the world” came “at vast cost”.

Announcing that from today, ministers are removing the guidance for staff and students in most education and childcare settings to undertake twice weekly asymptomatic testing, the PM said free tests will remain available for “the oldest age groups and the most vulnerable to COVID”.

The Department of Health and Social Care will receive no extra money to deliver the testing.

Mr Johnson added that it is “only because levels of immunity are so high” that the remaining restrictions can be lifted and said “vaccines and treatments” must now been seen as “our first line of defence”.

He added that ministers and scientific experts will continue to “track the virus in granular detail”, including through the Office for National Statistics (ONS) survey, as there is “considerable uncertainty about the future path of the pandemic” and could be “significant resurgences”.

Accusing the prime minister of removing self-isolation support payments and weakening sick pay, he added: “These are decisions which will hit the lowest paid and the most insecure workers the hardest.”

Sir Keir also asked for assurances that research by the ONS will continue to be funded and called for the government to publish the scientific evidence behind its decision to scrap the legal requirement for people to self-isolate later this week.

“As a nation there is no doubt we need to move on from COVID. People need to know their liberties are returning and returning for good,” he said.

“But this is a half-baked announcement from a government paralysed by chaos and incompetence. It is not a plan to live well with COVID.”

He continued: “Free tests can’t continue forever, but if you’re 2-1 up with 10 minutes to go you don’t sub off one of your best defenders.”

Liberal Democrat leader Sir Ed Davey added: “Is the prime minister really telling people they must chose between money for the weekly shop or a test so they don’t accidentally take this contagious virus into their loved ones’ homes?”

Responding to Sir Keir, Mr Johnson said the evidence for ending COVID restrictions in England is “amply there in the scientific evidence”.

He added that the government will be able to deploy a “surge” of testing in the future to deal with variants of COVID that might be particularly dangerous.

Thanks to our COVID vaccine rollout we’re now the freest country in Europe.

I’ve accepted JCVI’s advice to offer a spring booster to the most vulnerable.

I’ve asked the NHS to prepare to offer it to those eligible around 6 months after their last dose.https://t.co/K2hHKfUoGL pic.twitter.com/BHiX8C3UlI

The announcement comes after a cabinet meeting to sign off the PM’s strategy finally took place earlier today after being pushed back due to a row over free testing.

Number 10 confirmed earlier that the gathering had been pushed back, with ministers having convened later on Monday afternoon to agree the plan.

Meanwhile, Health Secretary Sajid Javid has announced that an additional booster vaccine will be offered to people in certain groups from the spring, following the successful campaign.

This will be the second booster vaccine offered, and the fourth total jab – and will be offered to over-75s, residents in care homes for older adults and people aged over 12 who are immunosuppressed.

Chinese spy balloon flying over US airspace, says Pentagon
‘Her children need her home’: Family of missing dog walker ‘stuck in a nightmare’ since she disappeared
Police vow to bring missing Nicola Bulley home and urge search teams to scour river bank for clothes
Sunak believes British Army is ‘top-level fighting force’ despite US general’s warning
‘Nobody is born smart’: Ex-commander of Russian mercenary group apologises for fighting in Ukraine