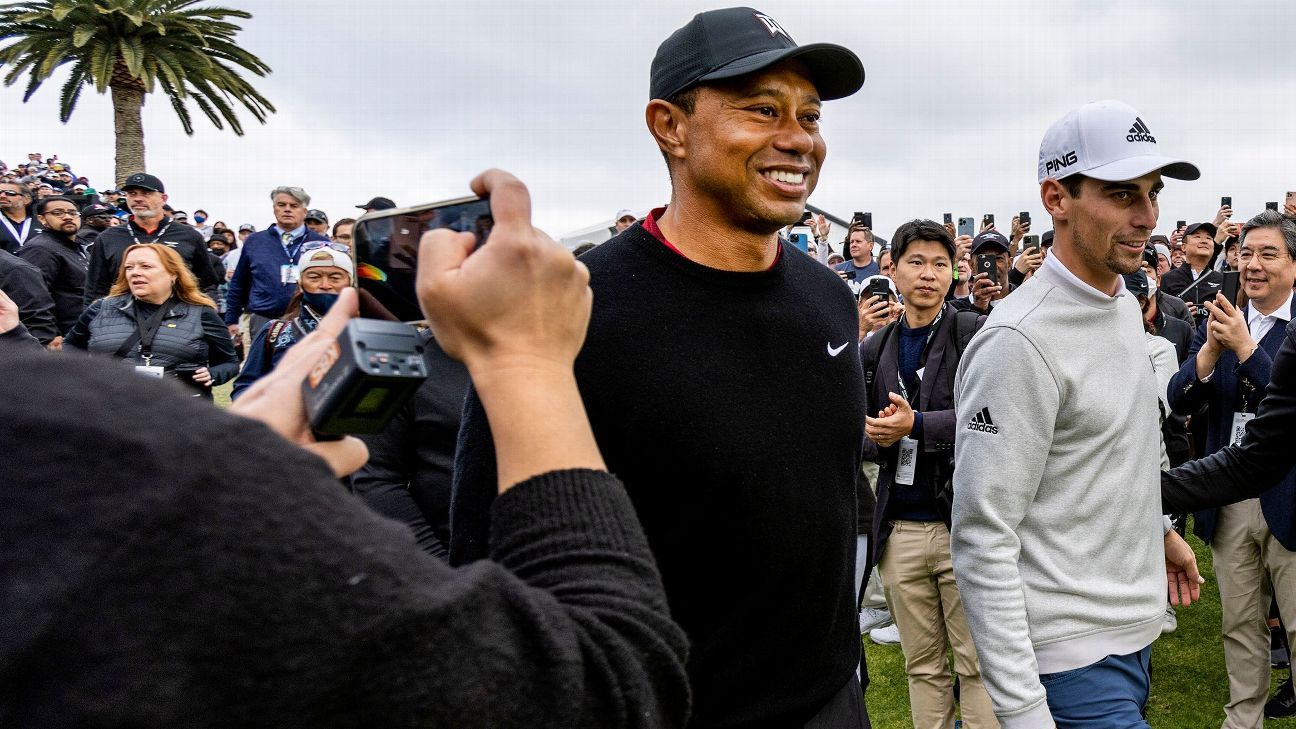 The first hole at Riviera Country Club is arguably the most famous first tee box on the PGA Tour. It’s perched 75 feet above the fairway and it’s about the size of a modest living room. It might also be the tour’s most beautiful, particularly early in the morning, when the Southern California sun has just begun to reveal itself from behind the hills, flooding the canyon with rays of orange light.

Tiger Woods stood on that tee box last Thursday morning, his arms sternly crossed and his face masking any emotion he might have been feeling at 6:40 a.m.

It’s the same tee box where he made his debut on the PGA Tour 30 years ago — a skinny, nervous, 16-year-old kid wearing pleated khakis, playing on a sponsor’s exemption. It was the first step in a career unlike any in golf history. You could tell the entire story of Woods’ time on the PGA Tour with those two moments as emotional bookends and leave out very little.

This time, though, Woods wasn’t there as player, but as an observer. He was there to watch Aaron Beverly, a 27-year-old from Vallejo, California, hit the tournament’s opening tee shot. Beverly, the recipient of the Charlie Sifford Memorial Exemption into the Genesis Invitational, a spot in the field handed out by Woods (the tournament host) to an aspiring minority golfer, took a smooth lash at the ball. As Woods’ head turned, he tracked it against the blue and orange sky, then a smattering of applause rippled through the sparse crowd as Beverly picked up his tee.

It was a quiet moment, but perhaps a fitting one. When Woods was confined to a hospital bed for three months after his 2021 car crash, he said what he missed most of all wasn’t the competitive rush of professional golf. He missed the simplest things: the way birds chirp in the early morning, the way grass feels beneath your feet and the way a golf ball sounds when it’s hit perfectly flush by an iron.

He almost lost all those things, plus much more.

Despite the passage of time, we still aren’t any closer to understanding why it happened.

One year ago Wednesday — days after hosting the Genesis but not playing in it because he was recovering from a fifth back surgery — Tiger Woods was alone in his car, driving to an early-morning documentary shoot, when he hit the median of Hawthorne Boulevard near Rancho Palos Verdes going somewhere between 82 to 87 mph. The speed limit was 45 mph. He crossed two lanes of oncoming traffic, slammed into a tree and rolled his car into a ditch. The injuries he sustained from the accident were so severe, Woods later revealed that doctors considered, in the weeks after the crash, amputating his right leg because of the damage to his arteries.

It was a surreal and scary moment for the millions of golf fans who’d watched Woods grow up, watched him play the role of comic book superhero on the course. It was easy to wonder, once again, if his career had been a Greek tragedy all along.

The narrative of what happened has already been delicately reframed as a comeback story, the accident recast as one last obstacle for Woods to overcome. The questions Woods fielded last week from reporters in Los Angeles were limited almost exclusively to golf. Will he tee it up at the Masters? Might he return to the PGA Tour sooner than expected? How was he filling his competitive void? How much progress had he been able to make on his game?

“I’ve got a long way to go,” Woods said. “Will I come back? Yes. Will I come back and play a full schedule? No. I said that [at the Hero World Challenge], that will never happen again.”

Only once did the circumstances of his crash come up. How fortunate, Woods was asked, did he feel to even be here?

“I’m very lucky, very lucky,” Woods said. “As a lot of you guys know, I didn’t know if I was going to have the right leg or not. So, to be able to have my right leg still here, it’s huge. I still have a lot of issues with it, but it’s mine and I’m very thankful for that.”

That is the narrative Woods would prefer, a lucky man spared from something much worse.

Does he owe anyone anything in terms of an explanation for what happened?

“It’s all in the police report,” Woods said the one time he was asked a question about what led to the crash, in a news conference before the Hero World Challenge in December.

It was the kind of deflection Woods has leaned on throughout his career, answering a question by suggesting the answers are already there for everyone to see. It is, in fact, the exact line he used in 2010, when he was asked why he smashed his car into a fire hydrant outside his Orlando, Florida, home at 2:30 a.m. on Thanksgiving weekend in 2009. When police arrived, they found him lying unconscious in the street, bleeding from cuts on his face and lip.

“Well, it’s all in the police report,” Woods told ESPN in his first interview after the crash.

Beyond that, Woods said, everything that led up to it would stay private.

It’s possible that Woods is correct that he owes us nothing. You may believe — like many — that Woods has given us more than enough of himself over the years, that his triumphs and his demons have served as the fuel for a dozen books, countless tabloid stories and a million hours of television, and that is plenty. He has thrived in the spotlight of fame, but he has suffered for it too, and it is not our place to judge or question what he does away from the golf course. Privacy is more than the name of his yacht; it’s a small piece of grace we can extend to someone who has lived in a fishbowl since he was a 2-year-old hitting balls next to Bob Hope on “The Mike Douglas Show.”

But something brought him to a place last year when he was bleeding and broken, where doctors were mulling amputating one of the most famous right legs in sports. Shrugging it off, dismissing whatever got him there and treating it as one more obstacle for him to overcome as we root for another comeback starts to feel like a form of enabling.

Three times in his adult life, Woods has gotten behind the wheel of a car and done something that required a police investigation.

In 2009, there was the fire hydrant. A witness reportedly told police Woods had been drinking alcohol earlier in the day, but the Florida Highway Patrol said alcohol was not involved in the accident. Woods didn’t face any criminal charges, but he was issued a citation for careless driving.

In 2017, police found him asleep behind the wheel of his Mercedes at 3 a.m., with two flat tires and a damaged fender, his car at rest against the guardrail of a Florida highway, but with his engine still running. He told officers he thought he was in California when they woke him up, then he fell back asleep multiple times during the interview. A toxicology report later revealed he had four prescription drugs in his system at the time of the incident, as well as THC from marijuana. He was arrested and charged with DUI, but eventually entered a diversionary program for first-time offenders, one where he was required to take DUI education classes and refrain from drugs or alcohol while on probation.

A year ago Wednesday, he nearly lost his leg and maybe his life. Woods was not issued a citation. The police report concluded that Woods was driving at an unsafe speed, but it contained other details that a year later still haven’t been explained.

The police report states that Woods, observed on traffic cameras prior to the crash, was driving responsibly before the accident, avoiding a cyclist and pedestrians at various points, but that he sat at a green light for six seconds at one point on his drive prior to moving through an intersection.

“We did not check his phone for texting, and there was really no need to do that,” James Powers, the captain of the Lomita Sheriff Station that investigated the crash, said at a news conference six weeks after the crash. “It’s not going to change anything.”

The police report states that Woods never hit the brakes during his crash, and that his accelerator was floored when he hit the median and then the tree. It states that the collision would not have occurred if Woods had applied the brakes or steered to correct the direction of travel.

Officers found an empty, unmarked pill bottle among Woods’ belongings, according to the report, but no toxicology report was ordered by investigators. No medical professional or police investigator smelled — or had reason to suspect he’d been impaired by — alcohol. Woods told an officer at the hospital he’d taken no prescription medication prior to the crash. There were no open intoxicants, or paraphernalia, inside the car.

Woods is right; there is a lot to learn from the police report. But it also raises some questions, ones we’ll likely never know the answer to.

We have always wanted so much from Woods. We’ve asked him to be a trailblazer and an advocate for social change when it was clear he never felt comfortable in those roles. We’ve asked him (repeatedly) to prop up the sport of golf, financially and emotionally, even as his body was breaking down. We rarely bothered to ponder how onerous the task must have felt at times.

When Woods visited the CBS booth Saturday, announcer Jim Nantz couldn’t resist pressing him (repeatedly) on when he might return to play on tour. Would he play in the Masters? How about the Masters Par 3 Contest, if not the full event? Would the Open Championship at St. Andrews be an easier walk? Would he definitely commit to playing in 2022?

Woods has lived such an outsized life, it’s easy to forget that he’s human. It’s important to be sensitive to that, no matter how badly we might long to see him play golf again.

But respecting his humanity can also mean acknowledging his fallibility. He has endangered others — and not just once — with his driving. As we get excited about Woods’ future and maybe hold onto a thought of him returning to Riviera’s majestic first tee as a player, we can hold another thought in our hearts: He is not the only person who is lucky that the damage done was not more severe. What comes next is a gift in more ways than one.