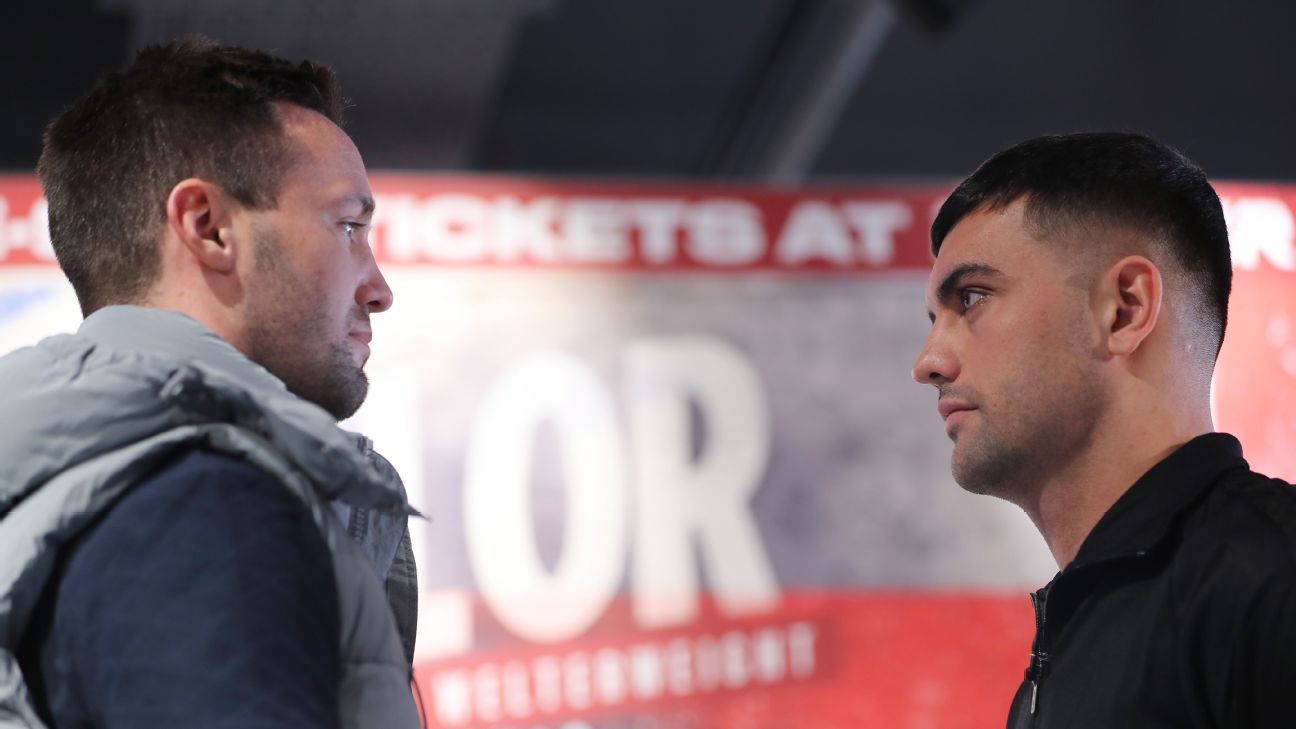 Josh Taylor returns home to Scotland to make his first title defense as boxing’s undisputed junior welterweight champion of the world at The SSE Hydro in Glasgow (Saturday on ESPN+, 2 p.m. ET).

Will Taylor, a considerable betting favorite at -1,400 according to Caesars Sportsbook, handle the pressure of his first test since becoming the undisputed champ? Or could Catterall, who is taking a major step up in competition by facing Taylor, continue last year’s theme across boxing and pull off another major upset?

ESPN boxing analyst and two-division world champion Timothy Bradley Jr. breaks down both fighters’ styles, the matchup and what the future could hold for Taylor if he wins on Saturday.

What does Jack Catterall bring to the table as a title challenger?

Catterall is 28 years old, and to this point he hasn’t really fought many upper-echelon guys at 140 pounds. This is a huge leap up in class for him. That’s not to say he doesn’t belong here, though, because he’s earned this fight by beating all the guys put in front of him and becoming the WBO mandatory challenger.

Top Rank Boxing is on ESPN and ESPN+. Subscribe to ESPN+ to get exclusive boxing events, weigh-ins and more.

He’s on the shorter side for 140 pounds, about 5-foot-7, with a 67-inch reach. Like Taylor, Catterall is a southpaw, so this is going to be a closed stance battle. The most notable southpaw we’ve seen Taylor face thus far in his career is Regis Prograis, who is a puncher and a good boxer with a really high IQ. And Taylor was able to figure things out against Prograis, earning a majority decision in the WBSS final in 2019, despite primarily facing orthodox stance fighters.

Catterall is a thinking type of fighter, but he can be aggressive, too. The one thing that strikes me with him is his explosiveness with his first step, especially with his counters. His bread and butter is a one-two combination starting with his right hand from that southpaw stance.

Catterall also has a pretty good straight left hand, and occasionally he’ll throw a looping left hand where he will change levels and attack you from the low point, which can allow him to surprise an opponent with a sneaky punch like an overhand left. That’s the shot that I think Catterall might be able to find his mark with if Taylor gets too relaxed or overconfident.

Taylor definitely needs to watch out for that left hand. On the inside, Catterall likes to dig down to the body, too — he has a vicious body punch, and I think his body shots are the hardest punches in his arsenal.

Catterall has shown to be a pretty good counterpuncher, and a boxer more than a power guy. He does well off the front foot, but not so hot off the back foot — he’s not really a guy who’s picking up his feet, moving, changing locations and using his feet to create offense. He likes to sit in front and march forward.

What are Taylor’s strongest attributes?

Taylor is one of the taller fighters at 140 pounds at 5-foot-10, and he’s well rounded in every department. He can fight inside the pocket. He can box on the outside. He can be a counterpuncher, if he needs to be, and he can get aggressive. I think he has one of the most underrated inside fighting games in boxing. He does a lot of framing, and he sets a lot of traps on the inside, especially with the uppercut. From the outside, he’s a quick and explosive striker, with the lead hand, and a strong right hook. His hands are strong.

He’s a complete fighter — great balance, great fundamentals, great chin. I don’t really see a lot of weakness in Taylor’s game, he can pretty much do it all. He’s a confident fighter, too. He believes in his abilities, and he’s been battle tested.

The reason he was able to become the undisputed champion is because of everything that he’s faced early in his career.

Taylor is a seriously underrated champion. And it’s not just the win over Ramirez. He fought Miguel Vasquez, who was a champion. He fought Ivan Baranchyk to win his first world title. He really impressed me against Prograis, because Prograis is a southpaw with power who can box and brawl, and Taylor beat him at his own game.

What are some of the pitfalls Taylor could fall into against Catterall?

Catterall is a mandatory challenger, an undefeated fighter who hasn’t been tested yet. Taylor knows that going into the fight because he once was that guy. He knows it could be challenging, and that Catterall is going to be in there with a lot of confidence. For me, I was the type of guy where it doesn’t matter who I’m fighting. They want what I’ve got, and they’re not going to take it. I sense that’s the way Taylor is, too.

But there’s a danger in overconfidence for a guy in Taylor’s position, too, taking an opponent too lightly, not really believing in his opponent’s craft, not really believing in his art of fighting style or his ability. But Taylor has seen a lot of different types of fights and different circumstances, and I think he’ll walk in on Saturday prepared for whatever is thrown at him.

How do Taylor and Catterall match up?

I don’t think Catterall really has too much of a plan B if things don’t go his way out of the gate. And that’s nothing against Catterall, as he has average to slightly above-average skills across the board. But he’s not really a big puncher, he’s not a great inside fighter.

Even if things start off a little rough for Taylor, he can make adjustments on the fly. If Taylor starts well, he can follow a game plan all the way through the fight.

The closest means of comparison is the lone common opponent for Taylor and Catterall, and that’s Ohara Davies. Taylor dominated Davies in 2017, and knocked him out in Round 7. When Catterall faced him in 2018, it was a struggle, and he only won by 115-113 on two of the scorecards.

All of that said, I still think it’s a good test for Taylor, even if I don’t think it’s going to be an extremely hard test for him. I think he should be able to dominate this fight at any range.

How does the fight play out?

If you look at what Taylor did the first time he knocked Ramirez down in Round 6, he drew him in with a feint. Ramirez came in, Taylor set the trap by pulling back and landed the counter. Ramirez landed right on his face after that. And that’s something Taylor’s probably going to do from Round 1 against Catterall. Even if the feints aren’t leading to anything directly right off the bat, those early feints set up things later in the fight.

For Taylor, I think it’s going to be a straight left hand up top or something downstairs, and then the fight’s going to end. This fight won’t go beyond Round 7, and if Taylor is at the top of his game he could definitely end it within five rounds.

How do you see Taylor at 147 if he decides to move up?

Taylor fits right in with the top-tier welterweights. There’s no question in my mind. A 5-foot-10 southpaw who can do it all is dangerous. Going up seven pounds is difficult, but with the skill set Taylor has, and his mindset, I think he will fare well against any top guy at 147 pounds, even though he’s only 18 fights into his pro career heading into this Catterall fight.

Taylor is a throwback fighter who wants to test himself and his abilities against the best. I appreciate that about Taylor, because he’s willing to take the big risks and take the biggest fights out there. While you have a lot of guys out there who are just chasing the dollars and not as worried about the legacy, I think Taylor is after it all.

And there are plenty of challenges sitting at 147. Beyond the champions, you have younger guys like Jaron “Boots” Ennis, Conor Benn and Vergil Ortiz Jr. knocking on the door, too.

Size, style and ability can take you a long way, but if you don’t have the mentality, and you don’t have the guts and the heart where you’re willing to go through whatever pain needed to get the victory, you’re not going to last long in boxing. Taylor has that.

Shut him down? If asked, Rodgers ‘open’ to idea
‘Couldn’t be more excited’: Elton John to headline Glastonbury in last UK gig of final tour
OPEC+ to consider deeper oil output cuts ahead of Russia sanctions and proposed price cap
Big advertisers including Amazon returning to Twitter, says report
How lessons from 2019 have impacted the Blues’ strategy this season