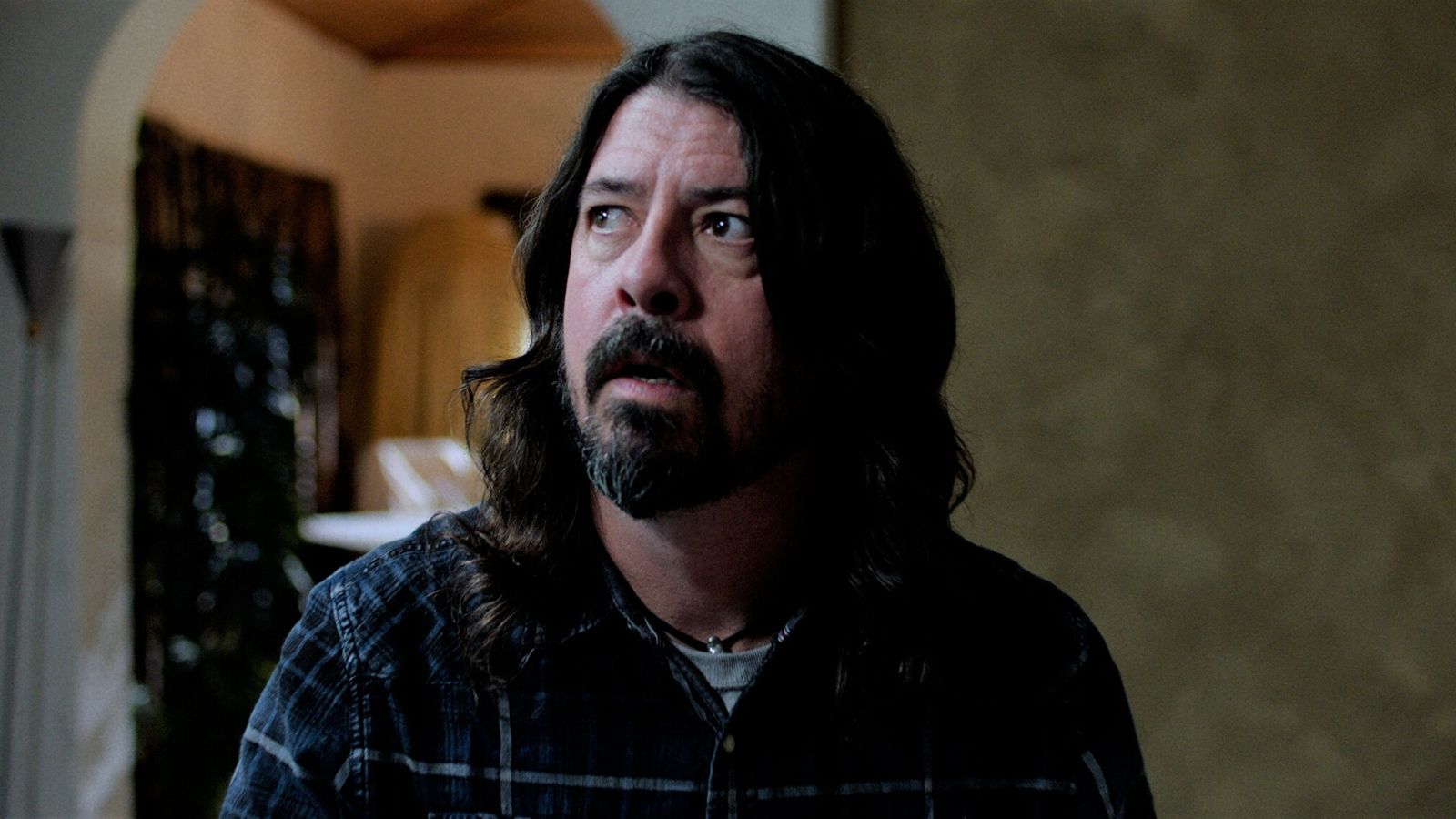 Dave Grohl’s reputation as the nicest man in rock precedes him. “Are you ready to meet rock royalty?” I’m asked before I speak to him. Everyone in the (Zoom) room is excited about meeting Dave Grohl.

If things had gone to plan, the Foo Fighters frontman and former Nirvana drummer would have been in the UK this week to introduce British fans to Studio 666, a comedy horror film created with his bandmates that was intended to be a “really low-budget slasher flick” made for fun, but somehow snowballed into a full-length feature movie with a premiere, global promo, and a cameo from Lionel Richie.

If the pandemic has taught us anything though, it’s that things don’t always go to plan, and so instead Grohl is saying hello virtually from the Foo Fighters’ studio in LA. This time, it isn’t coronavirus that put paid to his trip, but Storm Eunice.

Studio 666 sees the band – Nate Mendel, Pat Smear, Taylor Hawkins, Chris Shiflett and Rami Jaffee, as well as Grohl – moving into an abandoned old mansion steeped in grisly rock history to record their much-anticipated 10th album. But they soon find themselves grappling with supernatural forces – and a cursed song.

The star gets to explore his darker side as well his acting chops, but admits to Sky News that the Foo Fighters probably won’t be following in fellow music star Lady Gaga‘s Oscar and now BAFTA-nominated stilettos any time soon (although Grohl does develop a taste for raw meat in the film).

“Clearly not,” he laughs, before launching into a full spoiler. “The premise of the movie is really simple and fun. The band is looking for a place to record. We move into this old house, the house turns out to be haunted. I become possessed. I murder the entire band over creative differences and then I go solo. So it’s a lot different than, you know, someone like Lady Gaga making a real, substantial, legitimate movie.”

He sees it more as an extended Foo Fighters video, which they are known for pulling out all the stops for. “Our intention was just to do something we’d never done and have a good time and then hope that our audience enjoys it as well. I mean, nobody’s ordering tuxes for the Oscars. It’s not on the cards.”

‘The most ridiculous idea I’d ever heard’

The opportunity came up about three years ago, when the Foo Fighters really were about to make their 10th album, Medicine At Midnight, released in February 2021. Grohl rented the house to write and demo new songs and the band ended up recording there. And then he got a call from a friend who pitched “the most ridiculous idea I’d ever heard”.

But when he soon changed his mind. “I thought, well, hold on a second, we already have the house. We might as well just set up some cameras once we’re done with the record and make a really low-budget slasher flick. And then it turned into a full-length feature film.”

He says he was inspired by other movies starring bands and music stars, from The Beatles’ 1964 classic A Hard Day’s Night and 1965’s Help!, to Kiss in the 1978 TV film Kiss Meets the Phantom Of The Park, and Prince’s Purple Rain in 1984 – as well as Spice World, released in 1997.

“There hasn’t been one in a long time. So when the opportunity came, I thought, well, we’re probably the only band that would do something this ridiculous, so we might as well.”

While the film sees Grohl turn into a diva-like villain, he says this couldn’t be further from the truth when it comes to making Foo Fighters records.

“The premise is based on a lot of really hilarious rock and roll cliches and stereotypes, right? The lead singer that wants to go solo and is at a creative war with his own band – and some lead singers do exactly that. That’s something I would never wish to do because I actually like being in the Foo Fighters.

“In the movie, I have writer’s block and I start losing my mind and we have these crazy, screaming, murderous arguments while we’re making the album. And when we make Foo Fighters records, honestly, we stroll into the studio, we usually have too much material and we spend a couple of weeks, a couple of months, just kind of playing our instruments and laughing hysterically… we still enjoy what we do and each other.”

Without giving too much away, the film features some pretty inventive deaths – the work of special effects guy Tony Gardner, who had previously worked with Foo Fighters on their video for 2017 single Run and who, Grohl says excitedly, invented Bride Of Chucky and was in the Thriller video.

“He’s the most gentle, meek, sweet, wonderful person. You would never imagine that his job is to basically come up with the most grisly, gory, inventive and entertaining ways to murder people. So I’m sorry to say that those weren’t my ideas, but they’re pretty good.”

Returning to live music and working with Liam Gallagher

As well as Studio 666, the Foo Fighters have tour dates coming up, including shows in the UK, after picking up live shows in the US last summer for the first time during the pandemic. His enthusiasm for a return to music normality brings out Grohl’s – the singer who broke Adele’s record for expletives at Glastonbury – famous sweary side. “The first shows back, the energy of the audience and the band was explosive. It was more than I’d ever felt walking on stage before.

“It’s been so long since we’ve been there. Just seeing it on my itinerary, I get excited. Every night before we play, I walk out to the side of the stage and I look at the audience and I take a good look at the at the venue and the atmosphere. And I walk back into our dressing room and I say to the guys, ‘We’re going to f*** this place up tonight’. Every time. ‘We’re going to f****** tear this place up’.”

He’s also recently worked with Liam Gallagher, co-writing and playing drums on his latest single, Everything’s Electric, which the Oasis star performed at the Brits. The pair have known each other for years, he says, so he was happy to help work on “a real banger” of a song. “When I heard the end result, I was like, I’m so proud that I got to be the drummer for Liam for four minutes. That’s pretty cool.”

Grohl made headlines recently for comments made about hearing loss, after saying in a radio interview: “I’m a rock musician. I’m f****** deaf.” It’s not something he worries about, he assures fans, but rather a conversation that got “blown way out of proportion”.

“If you were to ask any musician if they have any sort of hearing loss, I guarantee you 99.9% of those people will say, ‘oh, absolutely’… I’ve read some of those headlines where it’s like, I’ve been lip reading for years, and I can’t hear anything. It’s not that bad. It really isn’t. I go into the studio every day and I sit there and listen to the like, the tiny details of every mix and every song. I’m fine.” He gestures to his left ear. “Believe me, it’s only this ear. So if I don’t like you, I’ll sit to your right at dinner.”

So remember that if you ever get to have dinner with Dave Grohl.

100% of UK car buyers are ready to go electric for the right price
Enjoy a gas-free experience with Greenworks’ 24V string trimmer at $58, more in New Green Deals
New chancellor denies he threatened to quit if not picked to replace Sunak
Ukraine War: Time running out for Lysychansk
Government considering 50-year mortgages that could pass down generations