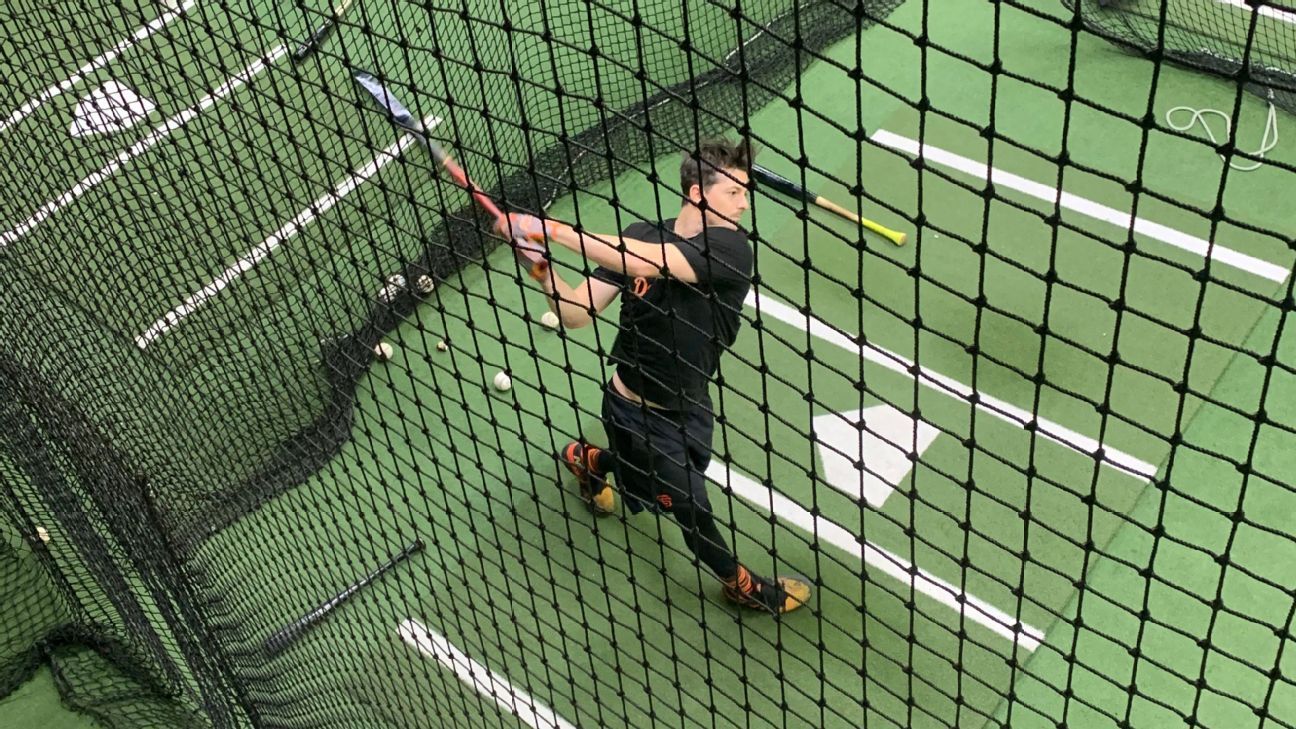 NASHVILLE, Tenn. — The workout program prescribed by the San Francisco Giants‘ training staff covered 10 weeks, but this is Week 11 of the lockout by the owners and those instructions are beyond their expiration date. Because club employees are forbidden from having any contact with players, Giants Curt Casali and Mike Yastrzemski are ad-libbing through a daily regimen at Vanderbilt University, among big leaguers who gather here at the baseball complex most days this winter.

For a spring training with an uncertain start date.

For a season that may or may not happen.

“Maybe we should just start over,” Casali jokes, between sets of weightlifting. Later, he will throw batting practice to Yastrzemski, who will, in turn, flip pitches to Casali, and to Phil Gosselin, a veteran free-agent infielder who can’t sign with a team until the lockout ends.

“This is torture,” says Yastrzemski, as he picks up baseballs in between rounds of BP. “Let’s go play baseball. Enough is enough.”

Last Monday, Feb. 21, would’ve been the day a lot of teams would’ve held their first full-squad workouts at their respective spring training sites. Platoons of pitchers chatting their way through fielding practice drills, as field coordinators check their watches to advance the groups. Position players taking ground balls and fly balls, and then stepping into sunlit batting cages to hone their swings in advance of Opening Day, underneath the promise of many tomorrows.

But on this day, nobody knows what tomorrow brings for professional baseball. Spring training is a concept, a hope, not a given. So Casali and Yastrzemski are among a dozen big leaguers squeezing in loosely structured morning workouts before the bulk of the Vanderbilt players finish classes and take over the place.

Yastrzemski describes the wait as “Stressful. … Tedious. We want to be doing what we love to do, playing baseball, and figuring this whole thing out so that way we can get back to some normalcy. Especially with the way the last two seasons have gone.”

Yastrzemski is referring to the COVID-delayed 60-game season of 2020, and the 2021 season, which was sometimes infiltrated by COVID-19 outbreaks. “We had to do what we had to do then, but now, it’s up to us” — folks in the baseball industry — “the decision-making and discussions and negotiations. From that sense, it’s a little tough handling not being ready to play right now.”

The Monday workout starts in the weight room before shifting outside, where the Atlanta Braves‘ Kyle Wright, the Kansas City Royals‘ Collin Snider and a couple of other pitchers throw to a handful of hitters from the mound on Hawkins Field. His shirt soaked in sweat, Wright guesstimates that he threw about 25 pitches. He has thoughts about possibly ramping up his pitch count in the days ahead, but then again, he’s not sure; nobody knows when this wait will end.

Casali figured he would work out four days out of five during the week, then take the weekend off. But if the lockout continues, he’s not sure exactly what he’ll do, beyond staying ready.

This workout is sprinkled with conversations about the Giants’ exceptional 2021 season, about how the team turned the corner, about Gabe Kapler’s extraordinary growth as a manager, about Buster Posey‘s decision to retire. The workouts are also typically filled with conversations about the labor situation, Yastrzemski acknowledges, the players talking about where the union and owners stand. About the lack of negotiations, a hallmark of this particular standoff. 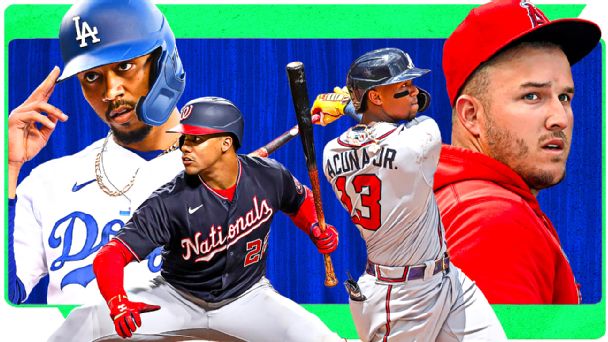 Buster Olney goes position by position to rate the best of the best in baseball.

Casali and Yastrzemski get regular updates through the player representative on the Giants’ roster, Austin Slater. Tony Kemp, an Oakland A’s infielder, hears from Matt Chapman in a teamwide WhatsApp group chat or checks in with his agent.

The questions from family and friends about the CBA negotiations are constant. Yastrzemski says, “I get asked the same question over and over: What’s going on?” In the face of that persistence. the players wall themselves off emotionally to some degree — partly because they don’t really have concrete answers.

“As of late, I’ve been like, ‘No new news yet, but I think something will get done soon,'” Kemp says, laughing. “That’s what I’m going to say. ‘I don’t know what’s going on, but I’m sure something will get worked out in the next couple of weeks.’ I’m an optimist, so I think everything is going to be all good.

“They’re probably not happy with the answers I’m giving them, but that’s OK. I honestly don’t try to get too in-depth with it, because I don’t want to say anything wrong. They’ve got the internet. They can do their own research.”

Casali says, “Honestly, you guys” — the media — “will find out before we do sometimes.”

Later, after the Monday workout, word filters out of the negotiations in Florida that no significant progress was made. And no major progress has been made in the days that have followed.

There is a confidence among the players that when baseball resumes — assuming it does — they will be ready.

Kemp and Yastrzemski both had newborn daughters this offseason, and show pictures between elements of the day’s work.

“We haven’t even gotten a place in Arizona,” says Kemp. “We’re just kind of living in the moment. If we get a date [to start baseball], we’ll make some plans. Until then, we’re just enjoying time at home, being a family of three.”

After most of the players move from the field to inside the complex — some to take swings in the indoor cages — outfielder Rhett Wiseman throws a football in left field. Kemp sprints the bases, and when he’s finished, he pulls each bag from the ground, leaving the field clean for the collegians.

“I’ve always been a big believer in controlling what you can control,” says Kemp. “And if you’re not there and in the room with the negotiations, you really can’t do anything about it. Control what you can, and what we can control is getting our mind, body ready to go another season.”

Kemp, Casali and Yastrzemski are in the midst of what will likely turn out to be the primary earning seasons of their careers — the years when, in theory, they glean the greatest compensation of their time in professional baseball.

Casali, 33, is arbitration-eligible, with five years and 151 days of service time, and is eligible for free agency; whatever he makes this year might be his highest salary in his years as a player, after making $1.5 million in 2021.

“This might be my biggest chance to earn,” Casali says. “I’m just hoping that everything works out. I’m not naive to the fact that you can’t ever take for granted when your last year is going to be. And I feel like I’ve been so fortunate to be in this position to play. We only have a small window of time to make a difference [in this profession] in the rest of our lives.”

In these CBA negotiations, some of the focus of the union had been getting middle-class players like Kemp, Casali and Yastrzemski paid more — by advancing players into free agency sooner in their careers. But as the talks have played out, the union has focused more on getting the youngest MLB players paid more, with an increase in the minimum salary. That bump might naturally push the salaries of older players forward, so long as they remain on 40-man rosters.

But teams have increasingly chosen to drop arbitration-eligible players by not tendering them contracts, in the belief they can find a comparable replacement at a lower cost. Yastrzemski says he tries not to think about how the negotiations affect him personally.

Among the players working out on this day, there is more concern than vitriol, more anxiety than anger. There are expressions of hope about growing the game beyond the agreement between the union and the owners, about building a product for which they share stewardship, no matter their net worth. Casali mentions that in his work as a catcher, he sees the incredible quality of this generation of hitters, the pitchers evolving beyond where they’ve ever been, throwing harder than ever. He sees the greatness in the game which, at the moment, is stuck in place.

“We’re fighting to create a better product for the fans,” says Yastrzemski, “and I think that’s what is important to grow the game. If you look at some of what these other sports have done to grow the game, they’ve done a really good job. … These are the things we’ve noticed as players for the game to get better — more enjoyable for the fans, more competitive.”

Addressing the noncompetitive behaviors like tanking and service-time manipulation, Yastrzemski says, “is a really good place to start, and solves a lot of the issues. Putting the best players on the field regardless of how we have to do that.”

At the moment, there is no sense of when these players — when all players — will be back on a major league field.

“There’s a lot of different aspects that we need to think about as a game, as an organization,” says Yastrzemski. “We can’t just look at one side of this and say, ‘It’s good for this player.’ We have to look at the whole and say, ‘How do we make this game better?’ So we get more fans, get more interactions, find different ways to bring the game to different countries and get more people excited about baseball season. Because for a little bit now, it feels like people only get excited about baseball when there’s nothing else on. I think that needs to change. I think people need to be excited about the game — because it is thrilling. People need to remember that.”