Labour is calling for much tougher sanctions on Russia following the Ukrainian invasion it condemns as a “heinous violation of international law”.

In a joint letter, three of the party’s senior MPs are calling on the government to widen already imposed sanctions on Russia and President Vladimir Putin, including a ban on the export of luxury goods to Moscow.

“Putin and those around him should not be able to live a Mayfair lifestyle in Moscow,” it says.

The call comes after the UK joined allies including the EU and the US in agreeing to cut select Russian banks from global financial messaging system SWIFT. 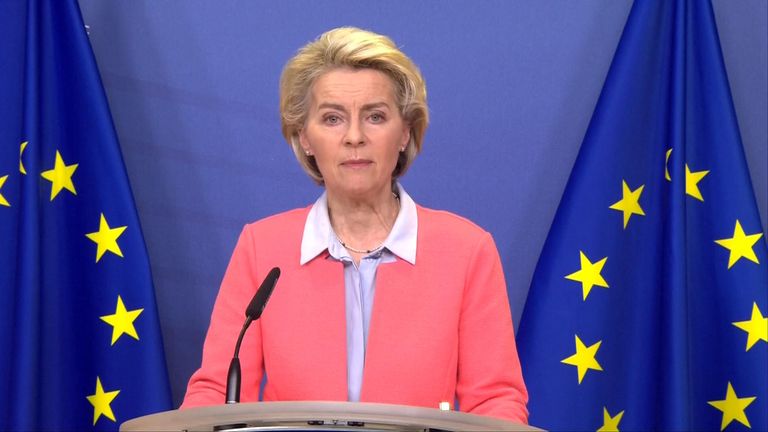 EU and allies agree to cut Russia from SWIFT

In terms of UK-specific measures, Prime Minister Boris Johnson said on Friday that on top of sanctions already imposed on Russia, the UK would introduce some directly on Mr Putin and his foreign minister Sergei Lavrov.

Their letter says: “The hardest possible sanctions must be levelled against all those linked to Putin and against the Russian government’s interests, so the regime faces the severest possible consequences for its actions.

“We believe we can and must go further, and faster, cutting Russia out of the Western financial system and tackling the wider challenge of illicit finance.”

They are calling on the government to:

• Widen export controls to include luxury goods
• Widen the number of banks prevented from accessing sterling
• Sanction Mr Putin alongside an “expanded list of oligarchs and cronies and increase the pace at which individuals and entities are designated”
• Expand sectoral sanctions to cover insurance (preventing UK firms from underwriting transactions with Russia) and further limit the supply of goods, services, and technology to the energy sector and other strategic sectors of the Russian economy
• Apply sanctions to wealth held under the name of family members

Export controls need to widened, they say, to cover a bigger range of goods and technology in sectors of strategic importance to the Russian economy.

“We should also close down the export of luxury goods from the UK to Russia, replicating measures already taken in the Syria sanctions regime,” the letter adds.

“Putin and those around him should not be able to live a Mayfair lifestyle in Moscow. “

Baidu claims its robotaxis rival traditional ride-hailing in parts of China
Ukraine War: Horrors of Kherson prison come to light
‘I believe in Brexit’: Sunak tries to quash rumours of closer alignment with EU
‘We have it in writing from FIFA’: Rainbow hats and flags allowed at Wales’ World Cup game against Iran
Scotland will find another way to independence, Sturgeon vows