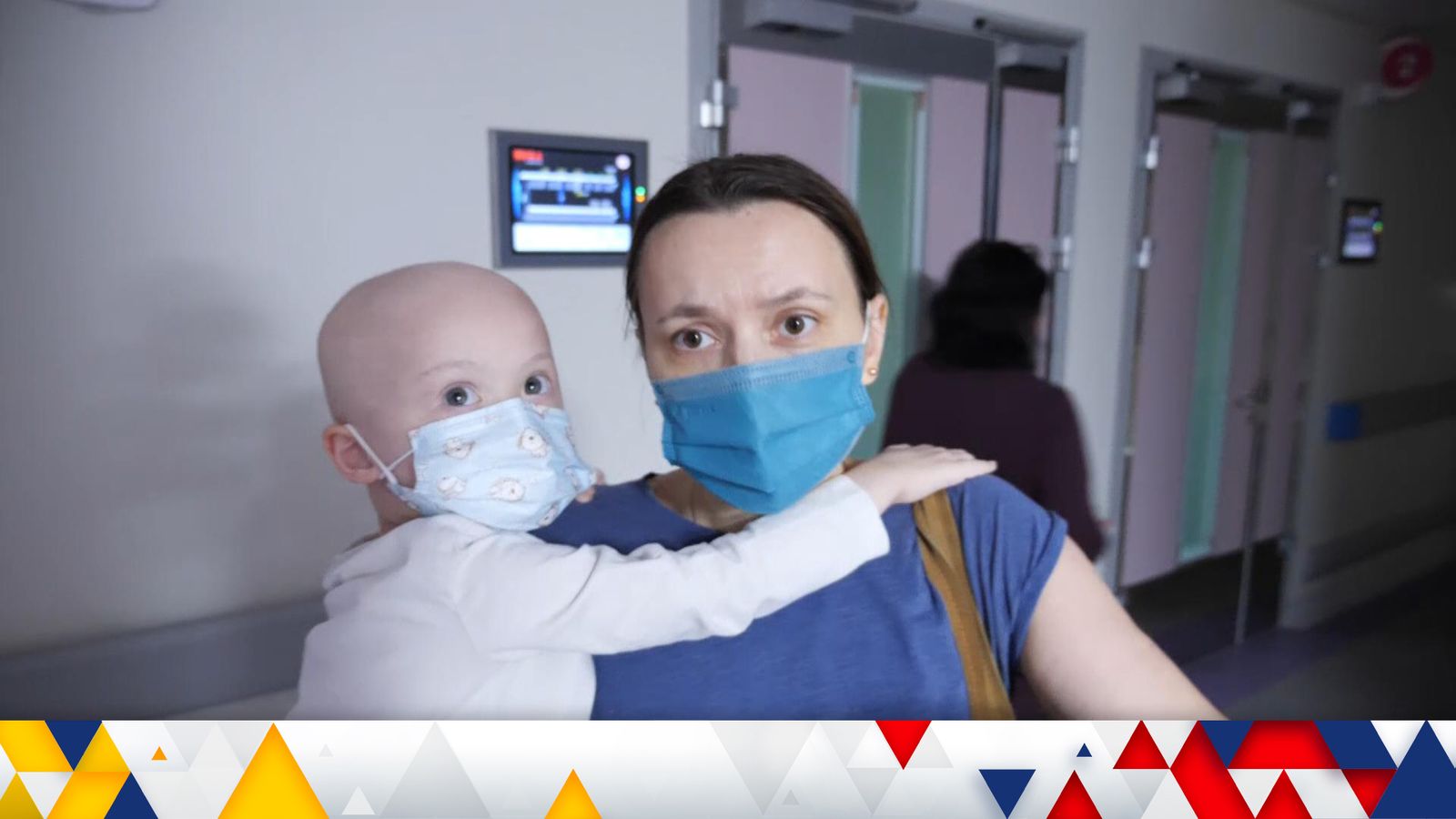 Clinging to his mother in the basement of Kyiv’s main children’s hospital, the four-year-old boy ground his teeth, making a scratching sound.

Nikita Synytsky, who has leukemia and Down’s syndrome, started making the noise when Russia launched its invasion of Ukraine last week, causing his life even more trauma.

“We are very nervous,” said Tatiana Pakhaliuk, his tired-looking mother, holding him tight.

“My son – you see the voice [sound] of teeth, he pushes his teeth,” she said.

Nikita, along with a group of other seriously ill, infant inpatients, relies on life-saving treatment at the hospital.

It cannot stop even when Russian missiles and bombs started falling.

Instead, each child, typically accompanied by a parent, has had to move to the basement of the multi-storey building, where they are better protected from airstrikes and gunfire.

But it is not only the gravely sick this hospital is trying to help.

Medics set up an emergency department within the first 24 hours of the war to treat children – and adults – in the city who suffer injuries in the fighting.

Dr Andrey Vysotskyi, 34, the head of the emergency unit, has barely slept in the five days since the war began.

This “was the quiet place with just kids, with scheduled operations,” he said, gesturing around what has become a busy triage area where patients are initially assessed.

Russia’s invasion of Ukraine mapped – what happened on day five

Three children have so far been brought to the facility – all with gunshot injuries. They all appeared separately on the night of Friday into Saturday.

One of the infants, a ten-year-old boy, died en route.

A 14-year-old boy suffered injuries to the face, back and legs.

He was on the operating table for more surgery on Monday but was described to be stable.

The third victim was a girl who suffered a gunshot wound to a finger.

She is okay. “Surgeons took out a bullet from her finger and performed reconstructive surgery,” the doctor said.

He continued: “Two days ago we have the gunfights all around the block, with the artillery fights etc etc, but this night was a little bit calm. And the war changes the priority, so now if you can take a shower and take a coffee, it is luxury [smiles at camera].”

For Nikita, when it is time to receive treatment or an assessment, his mother has to climb several flights of stairs to the ward where they usually stay.

Asked how she felt, she said: “Hands are trembling, legs are like in fitness because … 10,000 steps a day – up and down, with children with bags.”

Nikita needs chemotherapy and blood-transfusions, but with a war on blood is in short supply.

“As parents, we try to give our blood and change between parents and give blood for our children,” his mother said, underlining the desperate situation they are in.

She would love to be able to take him across the border to the safety of Poland but such a journey – difficult for any family with the country until attack – is even harder for children like Nikita who need constant care.

“Our children can’t live without a hospital, without medical treatment,” Ms Pakhaliuk said.

“If we will go to another country we should cross the border with a doctor… [and] the police or someone else to cross quickly and safely.

“Our children can’t stop and stay in a traffic jam because it is very dangerous for their life.”

She seemed resigned to staying in the hospital basement but is also worried about her two other children – daughters, aged 14 and six.

They are with the father, sheltering in the carpark of the family apartment block. He cannot drive them across the border into neighbouring Poland because he does not have petrol in his car. So the mother has reached out to strangers on social media to ask for help.

A family in Poland responded and has offered to let the girls live with them.

“I don’t know these people but I’m very thankful,” the mother said.

“I am afraid to give my children to people I don’t know but I think that is the best thing for me as a mother as my daughters should be alive… My son needs me so I will be with him.”