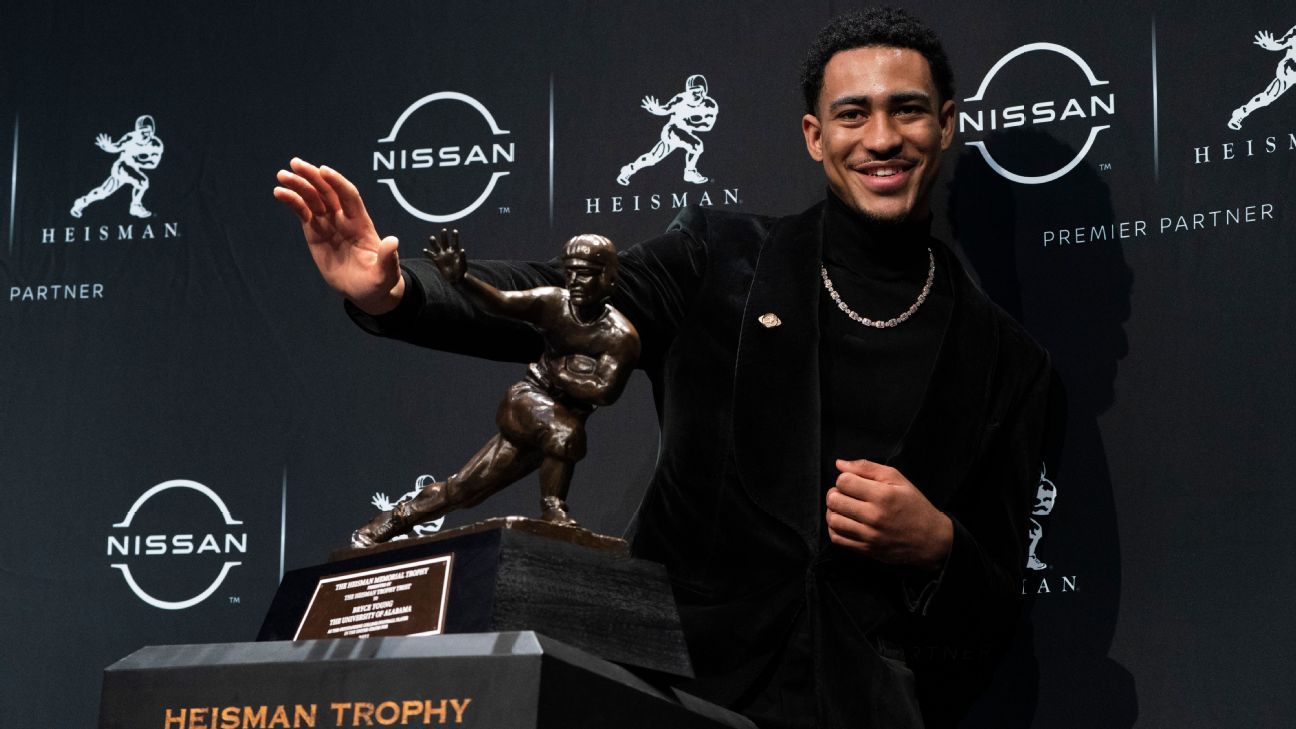 Bryce Young finished his first season as Alabama‘s full-time starting quarterback with the second-most passing touchdowns (47) and yards (4,872) in the FBS en route to the 2021 Heisman Trophy.

But will he repeat?

Not if Ohio State standout C.J. Stroud has anything to say about it. Stroud is coming off a season in which he threw for 4,435 yards and 44 touchdowns, including 573 yards and six touchdowns in a Rose Bowl victory over Utah.

Maybe Young’s teammate Will Anderson Jr., who led the FBS with 17.5 sacks a season ago, becomes the first defensive player since Charles Woodson in 1997 to win the award.

Our team of writers breaks down which players — both on offense and defense — have the best chance to win the Heisman Trophy in 2022.

Aside from Young, Stroud and Williams, who can make a Heisman run?

David Hale: The offseason hype surrounding Miami might already be too loud after the hiring of Mario Cristobal and a number of other high-profile assistants, but let’s throw a little more gas on the fire: QB Tyler Van Dyke wins the 2022 Heisman trophy. Van Dyke finished last season as arguably the hottest passer in the country, throwing for 300 yards and three or more touchdowns in each of his final six games. So imagine the narrative if a hotshot QB, fresh off a stellar 2021, leads long-suffering Miami and its first-year head coach to the promised land, finally capturing an ACC title. That’s a Heisman story!

Will it happen? Ah, probably not. There’s bound to be some growing pains for the Hurricanes once the season starts, and we’ve seen too many years of dashed hopes in Coral Gables to bet on things changing all at once. Still, the possibility at least exists, and Van Dyke, who famously trash talked NC State before toppling the Wolfpack on the field in just his fourth career start, certainly has the swagger to do something few others assumed possible.

Adam Rittenberg: I really like TreVeyon Henderson‘s potential at Ohio State. He might end up being the program’s best running back since Ezekiel Elliott. Still, we’ve seen what happens when teams have multiple Heisman contenders (hint: It usually isn’t good for the running back).

Wisconsin‘s Braelon Allen is another Big Ten back with an outside chance, after recording seven consecutive 100-yard rushing performances. But I don’t think Wisconsin will be good enough to push a running back ahead of the quarterback group and any others who might enter the mix.

If a defensive player can make a serious run, it’s Alabama’s Anderson, because of where he plays and what he has already accomplished.

This might shock some folks, but what about Georgia‘s Stetson Bennett? He’s the returning starter for the defending national champions, ranked fourth nationally in pass efficiency and third in total QBR, and will lead an extremely talented offense under the same coordinator (Todd Monken). I realize why Bennett is so easily written off, but should he be?

Another wild card here is Michigan quarterback J.J. McCarthy. He doesn’t even have the starting job yet but boasts the skill set to take Michigan’s offense to the next level.

Alex Scarborough: I like the bold suggestion of Bennett, but I struggle to see him posting the kind of eye-popping numbers typically associated with a Heisman-winning quarterback. Similarly, I don’t trust the voters to get it right on Anderson this time around. If he couldn’t sniff the top three last year with 34.5 tackles for loss and 17.5 sacks, what’s going to change this time around?

But I’m not here simply to throw cold water on candidates. I have one under-the-radar option of my own: LSU‘s Kayshon Boutte. After DeVonta Smith broke the three-decades-long drought for receivers to win the award in 2021, Boutte has what it takes to merit consideration this time around. While the casual fan might have missed it, what with LSU circling the drain the past two seasons, but Boutte quietly emerged as a star. During his last nine games, he caught 13 touchdowns and averaged 115.1 receiving yards per game. With veteran quarterback Myles Brennan back for his senior season and a new energy under first-year coach Brian Kelly, Boutte could be the centerpiece of a revitalized offense.

Heather Dinich: Hello, McFly?! Yes, I’m knocking on all of your heads right now. The nation’s top defensive player from 2021 is coming back. Let that sink in: Will Anderson Jr. was the best defensive player in college football. How is he not getting more serious consideration for the best player? Period?

I understand the doubt in the voters, and there are some excellent and popular names listed here, but Anderson has to be considered for the category “making a Heisman run.” He led the nation with 34.5 tackles for loss and led all Division I defenders with 17.5 sacks. He finished with 102 total tackles, and a team-high nine quarterback hurries and three pass breakups.

I don’t know what more you need, but I’ll give it to you: His ability to pressure quarterbacks was remarkable. His combination of size, speed and power drew double-teams that freed his teammates to make plays. His teammate Young won the Heisman trophy for what he did on the offensive side, and Anderson was equally as impressive for how he led the Tide’s defense.

What will it take for a defensive player to win a Heisman?

Hale: It’s going to happen sooner or later, and the odds are probably far more in defensive players’ favor than ever before. The biggest reason is simply awareness. The play that started the Heisman buzz for Georgia’s Jordan Davis was a 7-yard scramble by UAB‘s QB. In the past, no one notices it. But thanks to social media, the highlight of Davis — all 350 pounds of him — chasing down that QB from behind was seen by millions of astounded fans, including many Heisman voters.

There’s a better statistical understanding of defensive performance, too, so players aren’t simply valued by tackles and interceptions. Simply put, defensive players aren’t overlooked anymore. The biggest hurdle is simply how many great QBs there have been. Eventually we’ll get to a season in which no QB puts up an unimpeachable campaign and a defensive star breaks through the noise and wins it. In fact, Anderson might want to make sure he’s got enough room in his trophy case now, just to be safe.

Rittenberg: Visibility and memorable plays that shape or change the course of the college football season. Hale is right that there’s greater awareness of defensive players because we see more of the game than ever. But I still think a realistic candidate will have to make several wow plays, likely involving takeaways or touchdowns, to truly get noticed.

Alabama’s Anderson will be a fascinating test case. He plays for the nation’s most high-profile program and is coming off a record-setting season in which he didn’t get enough national recognition. If Anderson delivers a strong encore, ideally with multiple takeaways for touchdowns at big moments, he should get some traction for the Heisman, especially if the quarterback group isn’t that spectacular.

Jordan Davis was great but I can’t see an interior lineman ever winning. Linebacker is another position where it’s hard to truly stand out. If and when a defensive player wins, I’m going with a cornerback or a defensive end with an exceptional knack for creating turnovers.

Scarborough: Is it oversimplifying things to say that it will take a defensive player returning a kickoff or a punt for a touchdown? I mean, that seems to be the key to any non-quarterback winning the award. If DeVonta Smith doesn’t house a punt return against Arkansas, I’m not sure he finishes first among voters in 2021.

It’s silly and shouldn’t be that way, but remember that the last defensive player to win the award, Michigan cornerback Charles Woodson, also played receiver and returned punts. Sadly, the only way I see Nick Saban allowing Anderson on offense is to block in a short-yardage situation, and on special teams Anderson will be the one trying to block the kicks, not return them.

Hale: I watched the Rose Bowl. The answer is Stroud. Young is exceptional, but the odds of a player repeating are long. Stroud, meanwhile, put up numbers worthy of the Heisman a year ago, showed out on a big stage in his bowl game and returns a mind-boggling amount of skill position talent in 2022. And when he helps the Buckeyes end that two-year winless streak against Michigan, it’ll be all but locked up.

Rittenberg: Pains me to admit this, but Hale is right. The Big Ten hasn’t had a Heisman Trophy winner since Troy Smith in 2006! There’s a reluctance to go with a repeat winner in Young, and Stroud should once again put up monster numbers in Ryan Day’s offense. If Ohio State isn’t in the CFP conversation all fall, something has gone very, very wrong. Stroud will end the Big Ten’s Heisman drought and become Day’s first Heisman-winning quarterback.

Scarborough: Stroud is probably the right answer, but for the sake of argument I’ll take Caleb Williams. He already has good name recognition, and he’ll be under the spotlight all season with everyone looking to see how Lincoln Riley turns around USC. I know Williams has boldly said he wants to win more Super Bowls than Tom Brady, but I’d encourage him to start small and win a Heisman first.

Dinich: Sigh. Stroud is a smart and easy pick, and I do think Ohio State should be No. 1 this preseason and will finish in the playoff. Don’t forget, though, that reigning Heisman Trophy winner Bryce Young is also coming back. Alabama should also finish in the top four. Which brings me back to Anderson, the best pass-rusher in the country. So yeah, I’ll go out on a limb in March and be the one to say that all of the uproar over Anderson finishing fifth last year will change the perception in 2022 when he wins it.