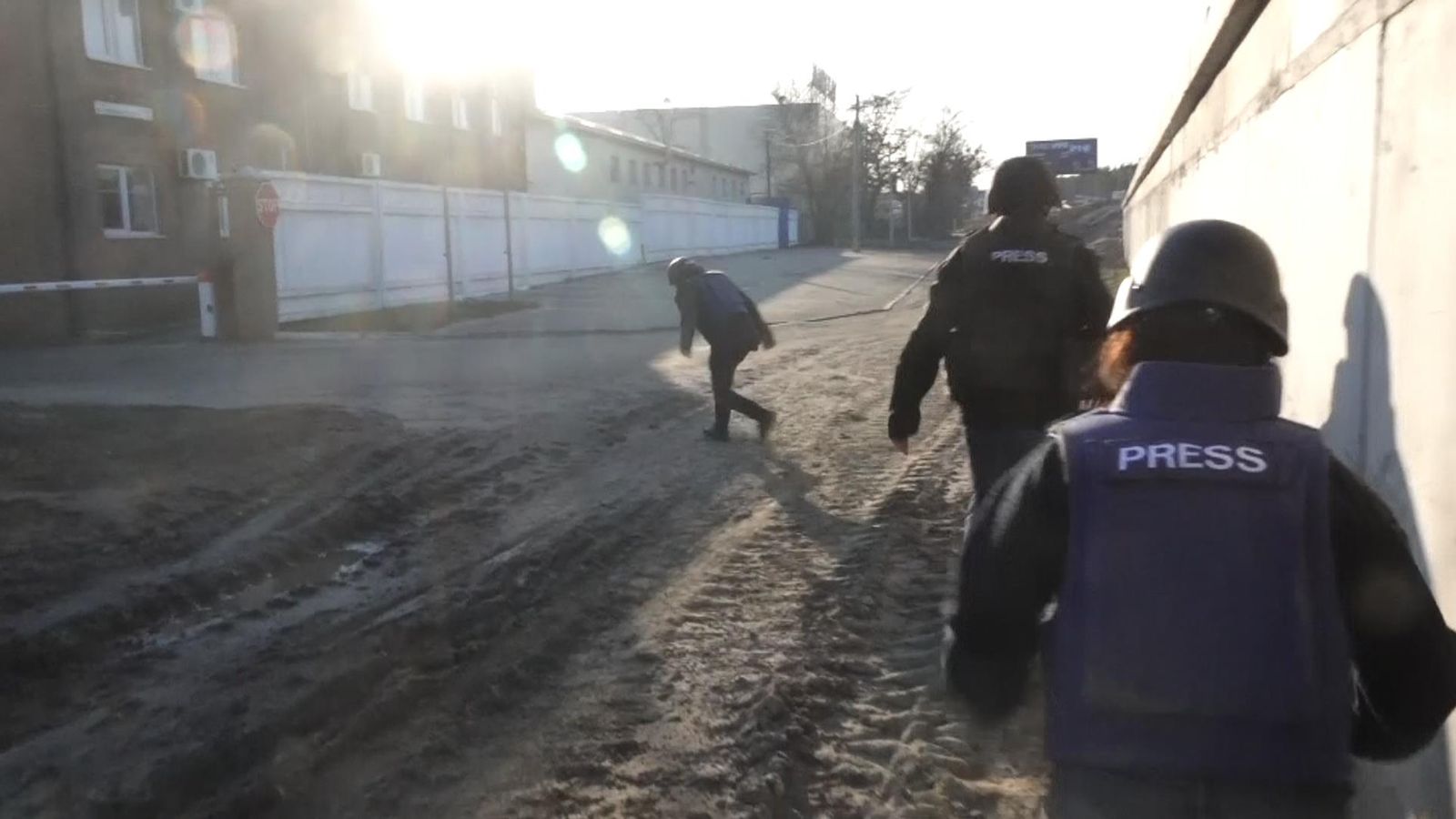 As with many wars, the Russian invasion of Ukraine changes constantly.

It all means that to report on events, you accept at the outset that your plans will change.

We set off cautiously for the town of Bucha, where a Russian convoy had been destroyed by the Ukrainian army the previous day. Trusted contacts in the town told us it was quiet and promised to show us the convoy and tell us about what had happened.

War in Ukraine – live updates on the Russian invasion

Even as we left central Kyiv through a city now being strengthened with extra soldiers, past motorways and major roads where volunteers were digging trenches, and the army were positioning Howitzer cannons for the defence of the capital, it was clear our journey was to be difficult.

Constant checkpoints need to be negotiated with care. The tension is palpable, the fighters are jumpy, and it’s all exacerbated by the constant distant sounds of machine gun fire and crump of artillery and mortars.

The town is only 30 kilometres or so from the centre of Kyiv, but our journey took us hours. Roads were closed and we were redirected countless times.

On our way, in the distance, we could see Russian helicopter gunships criss-crossing in the air, noses dipping towards the ground as they opened fire.

From being a quiet location, the whole of this part of the countryside – including our intended destination – had turned into a battlefield.

Pointing weapons into our car, the last Ukrainian checkpoint suggested we shouldn’t go any further. We elected to call it a day and return to the centre of the city. We had tried to report, but it was getting too difficult.

But that’s what happens, it’s just how it is.

The roads we had taken were now unsafe. Well, worse than that, really: they were instantaneously new front lines.

So, we decided to cut down to the western part of the city and re-enter from a different direction.

We stopped at a checkpoint and spoke to the soldiers and police, asking them if the road into Kyiv was passable.

A police officer walked to the car and handed us ice creams through the window, telling us we could turn left and go down the road to Kyiv – he said it was open.

We set off, but it was deadly quiet, and it’s fair to say we were concerned. But we travelled slowly forwards towards an intersection. There was rubble in the road, but that’s normal now. There were no soldiers, it all seemed deserted.

And then out of nowhere a small explosion and I saw something hit the car and a tyre burst. We rolled to a stop.

And then our world turned upside down.

The first round cracked the windscreen. Camera operator Richie Mockler huddled into the front passenger footwell. Then we were under full attack.

Bullets cascaded through the whole of the car, tracers, bullet flashes, windscreen glass, plastic seats, the steering wheel, and dashboard had disintegrated.

We didn’t know it at the time, but we were later told by the Ukrainians that we were being ambushed by a saboteur Russian reconnaissance squad. It was professional, the rounds kept smashing into the car – they didn’t miss.

Producer Martin Vowles, who was driving, got out of the car first, quickly followed by Andrii Lytvynenko, our local producer, leaving me, Richie, and my producer Dominique Van Heerden inside, taking cover in the footwells and across the backseat.

At this stage we thought it was a Ukrainian army checkpoint firing at us and that it was a mistake, so we started screaming we were journalists, but the rounds kept coming.

We knew we had to get out to survive, but the incoming fire was intense.

Dominique pushed open her door a little further and slipped to the ground, crawling towards a motorway barrier and then dived down a 40-foot embankment, rolling to the bottom.

Richie was shouting to me, but I can’t really remember much.

I do recall wondering if my death was going to be painful.

And then I was hit in the lower back. “I’ve been hit!” I shouted.

But what amazed me was that it didn’t hurt that bad. It was more like being punched, really.

It was strange, but I felt very calm. I managed to put my helmet on, and was about to attempt my escape, when I stopped and reached back into a shelf in the door and retrieved my phones and my press card, unbelievably.

Richie says I then got out of the car and stood up, before jogging to the edge of the embankment and then started running. I lost my balance and fell to the bottom, landing like a sack of potatoes, cutting my face. My armour and helmet almost certainly saved me.

But Richie was still inside the car. The rounds were ploughing into the car every time he moved. He was actually being protected by the engine block – he knew that.

He called out, and we shouted at him to come. But then silence. It seemed like an eternity before he emerged over the barrier and jumped down towards us, followed by a hail of gunfire.

At the bottom, we regrouped. The five of us were alive. We couldn’t believe it.

We were in shock, no doubt about it. But elated to be alive. Martin said to me, it’s a miracle any of us got out, let alone all five of us.

Still in the firing line, we headed away from the car, using a concrete wall for cover.

We spotted a factory unit with an open gate and sprinted one at a time inside, looking for cover. We were convinced the shooters would come to finish us off.

A door opened, and three caretakers beckoned for us to come inside their workshop.

We ran inside and gathered together, while Martin and Dominique rang through to Sky staff members, signalling the start of a frantic effort to try to start to arrange a rescue for us.

We knew it would take hours and fully expected to spend the night in the workshop while the logistics were worked on. Extracting people from remote locations in the middle of a war that keeps moving is fiendishly difficult.

Outside, the sounds of the battle intensified. We had no idea what was going on, but we were scared that at any moment the garage doors would explode inward, and gunmen would come to kill us.

It’s often like this in hairy situations – you survive the first part and get to safety, and then it all starts going downhill again. And you are tired, exhausted really, and the adrenaline subsides, and you feel down and beaten.

Attempts at levity fell on flat ears, eventually we gathered in a small office to keep warm, in silence, waiting for word of the rescue.

The phone rang, and we were told we had to wait until morning. It was by now pitch-black outside.

I began to doze on a couch, and I remember vaguely seeing a flashing light, then the sound of heavy boots and shouting in the stairwell.

Richie said he was convinced it was the end, before he heard these beautiful words: “Ukrainian police, come quickly!”

We filed out and were stuffed into a police vehicle, the driver gunned his engine, and we skidded through the gates of the factory unit.

There was a long way to go, but we had been rescued. A day later, we made it back to the centre of Kyiv.

The point is we were very lucky. But thousands of Ukrainians are dying, and families are being targeted by Russian hit squads just as we were, driving along in a family saloon and attacked.

This war gets worse by the day.

Stuart and his team are now safely back in the UK.