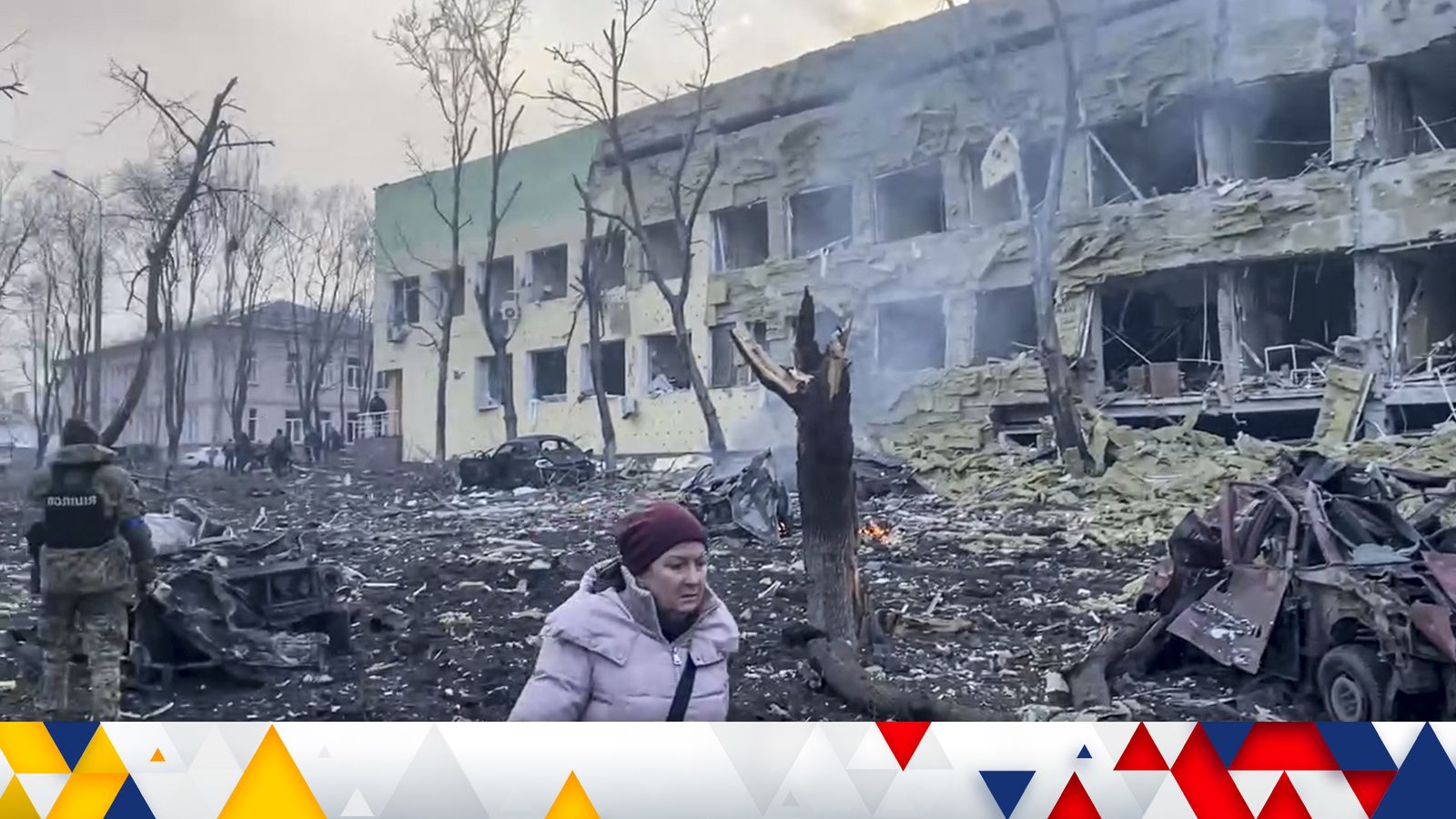 Children have been buried under rubble after a Russian airstrike hit a hospital in Mariupol, Ukraine’s President Volodymyr Zelenskyy has said.

The president tweeted that children were among people “under the wreckage”, calling the strike an “atrocity”.

Mariupol’s city council said the maternity and children’s hospital had been destroyed, adding that it did not know any casualty figures but that “the destruction is colossal”.

The governor of Donetsk region said 17 people, including women in labour, were wounded in the airstrike.

The governor added that the airstrike happened during an agreed ceasefire period to allow civilians to safely escape.

And video footage from the hospital shows bloodied pregnant women being brought out on stretchers.

In the grounds there is a huge crater, estimated to be about 20ft deep and 30ft wide. According to former senior RAF Office Air Marshall Edward Stringer, the crater seems to be evidence of a large, general-purpose bomb of at least 1,000lbs – probably 2,000lbs.

He told Sky News this was not likely to be a cluster bomb and is more likely to have been a sophisticated missile.

Prime Minister Boris Johnson has condemned the attack and said the UK is exploring “more support” for Ukraine to defend itself, adding: “We will hold Putin to account for his terrible crimes.”

Key developments:
• No-fly zone is needed to avert humanitarian catastrophe, says Ukraine’s leader
• UK will not escalate the conflict ‘in a way that would be unacceptable’ to the world, transport minister says
• Chernobyl radiation fears as minister calls for Russia to allow for urgent repairs
• First Lady Olena Zelenska writes open letter condemning Putin and ‘mass murder of civilians’

It comes as the UN human rights office has verified 1,424 civilian casualties since Russia invaded two weeks ago – with 516 people killed and 908 injured.

The southern port city of Mariupol is surrounded by Russian troops and has been subject to heavy shelling for days, leaving thousands of people without food, water and electricity.

The Ukrainian government said 1,170 civilians have been killed in Mariupol since Russia began its invasion, citing the city’s deputy mayor.

People in the city have been forced to get water from melting snow, while some bodies lay in the street from intense bombardment.

Yesterday a six-year-old girl named Tanya died alone from dehydration in the ruins of her home in the city after her mother was killed in shelling by Russian forces, Ukrainian authorities said.

New ceasefires were announced on Wednesday morning to allow thousands of civilians to escape from towns around Kyiv as well as the southern cities of Mariupol, Enerhodar and Volnovakha, Izyum in the east and Sumy in the northeast.

Previous attempts to establish safe evacuation corridors largely failed because of what the Ukrainians said were Russian attacks.

But Russian President Vladimir Putin, in a telephone call with Germany’s chancellor, accused militant Ukrainian nationalists of hampering the evacuations.