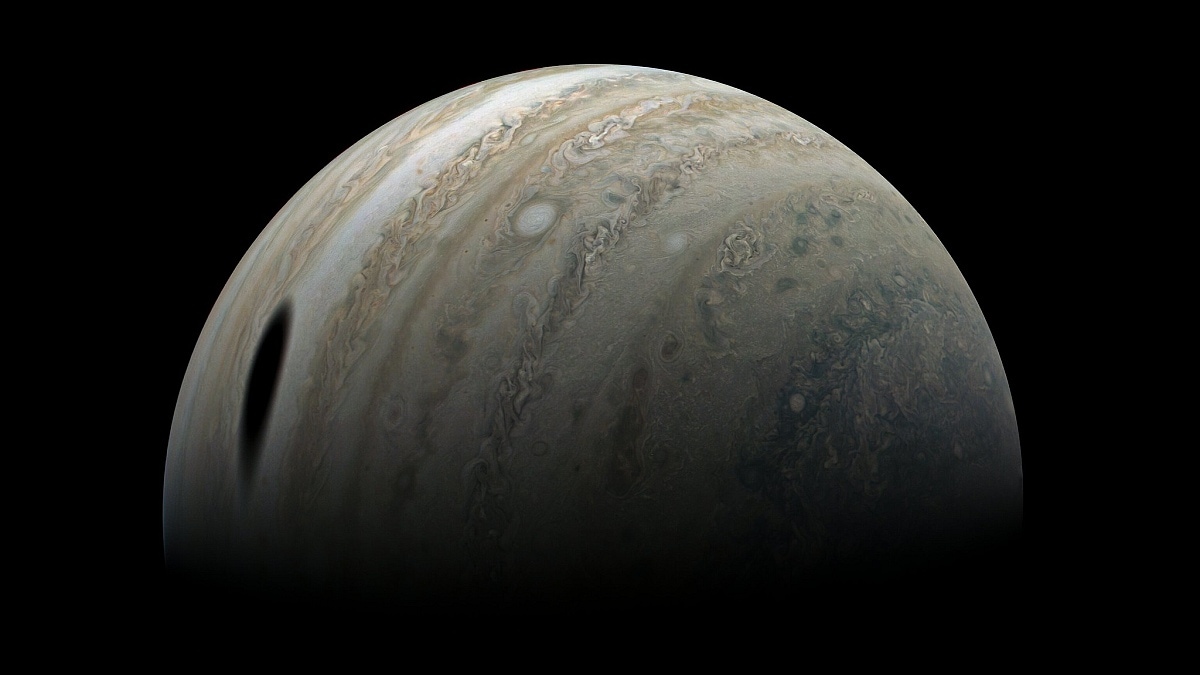 A powerful new image of the giant Jupiter has emerged online. This enhanced colour image was created by citizen scientist Kevin M Gill showed the biggest planet in the solar system under the shadow of its biggest moon, called Ganymede. Gill got the image after analysing data from the 20th close flyby of NASA’s Juno spacecraft. During its 20th close flyby in May 2019, Juno came as close as 14,800 kilometres from the planet’s cloud tops, according to NASA. But Juno can only perform such manoeuvres briefly because of the intense radiation at Jupiter.

Citizen scientists often examine and analyse the raw images released by NASA missions. The space agency allows the public to use the data with due credit. The Juno probe also has a dedicated imaging equipment for capturing data for citizen scientists; it’s called JunoCam.

“Jupiter and the shadow of Ganymede, @NASAJuno,” said Gill on Twitter.

NASA launched the Juno spacecraft in August 2011 and it reached Jupiter in July 2016. The main objective of sending the probe to the solar system’s largest planet was to determine how much water is present in Jupiter’s atmosphere, its composition, temperature, cloud motions, and map Jupiter’s magnetic and gravity fields.

A NASA report states that Juno’s primary mission will be completed in July 2021. It is now on an extended mission to investigate Jupiter through September 2025, or until the end of the probe’s life. During this expansion period, Juno will explore Jupiter and its rings and moons, including Ganymede.

Incidentally, last month, NASA released stunning images of Jupiter and Ganymede. Citizen scientist Gill was involved in creating the Jupiter image. He created the image from seven images that were taken during Juno’s 39th close pass by Jupiter on January 12, 2022.

JunoCam’s raw images are available for the public to peruse and process into image products.

Juno is the second probe to be developed as part of NASA’s New Frontiers Program. The first was the New Horizons mission to Pluto.