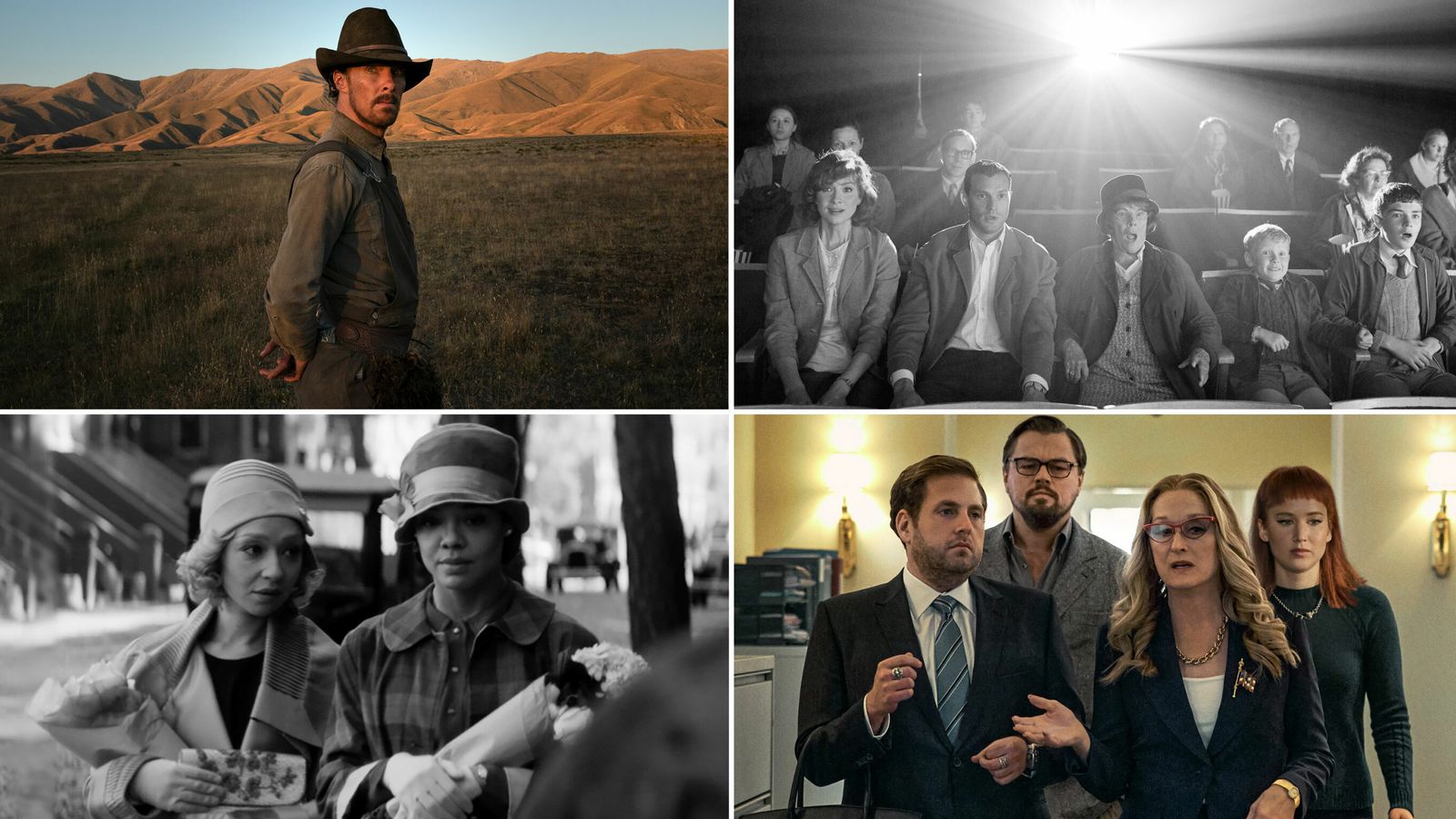 From climate change to the Troubles in Northern Ireland, many of this year’s BAFTA-nominated films carry powerful political messages.

It is likely that the speeches too will also reflect on what is happening in the wider world, so the war in Ukraine will inevitably feature heavily – the winners no doubt will want to use the platform to encourage the world to support those affected.

After BAFTA‘s mid-pandemic socially distanced ceremony in 2021, it should have been a return to normal service this year – and with Dame Shirley Bassey opening the show, viewers will finally get a bit of the glitz back.

Read more: The full list of films and stars in the running

It is a chance to celebrate some of the films that have provided some often much-needed escapism in difficult times. However, the ceremony’s success this year won’t be judged purely on whether the winners are worthy, or the glamour of the night, but whether the tone is appropriate.

Is best actor a two-horse race?

The best actor category sees Benedict Cumberbatch‘s battle to win his first film BAFTA – he has only ever won a TV BAFTA before – putting him head-to-head with Hollywood royalty Will Smith.

Cumberbatch certainly went the extra mile to play a repressed rancher in Jane Campion’s Power Of The Dog, getting nicotine poisoning through smoking in character too much and, perhaps more squeamishly, even learning how to castrate a bull.

With eight nominations, the film is a popular pick among voting members. However, in terms of who’ll take home the best actor prize, Smith might just have the popular momentum having recently beaten Cumberbatch at the SAG Awards for his portrayal of tennis stars Venus and Serena Williams’ father in King Richard.

Read more: Benedict Cumberbatch on Power Of The Dog
Read more: Lady Gaga on drawing from real-life trauma
Read more: Will Smith on ‘overt blocks’ for Williams sisters

In the same category, Stephen Graham (Boiling Point), Mahershala Ali (Swan Song), Adeel Akhtar (Ali & Ava) and Leonardo DiCaprio (Don’t Look Up) are without question deserving of their nominations, but many believe this awards season is now a two-horse race.

The other films and stars to look out for

Conversely, this year’s best actress category seems wide open. Back when Lady Gaga‘s film A Star is Born was nominated at the BAFTAs three years ago and she didn’t attend, she was accused of snubbing the ceremony. This year she’s jetting in especially – could that mean she fancies her chances for her role in House Of Gucci?

Coming at The Troubles from a very different angle, Sir Kenneth Branagh’s retelling of his childhood in Northern Ireland is up for six awards, including best film.

Although BAFTA overlooked Dame Judi Dench’s acting and Sir Kenneth’s directing (the pair both have Oscar nominations), stars Ciaran Hinds and Caitriona Balfe are both recognised in the supporting categories.

“We were kind of thinking, like, this is just a small film, a very personal story to Ken,” Balfe told Sky News. “Maybe in the UK and Ireland it’ll sort of connect with people but the fact that it’s sort of gone out further into the world and so many people are relating to it, connecting with it and appreciating it, is quite mind-blowing.”

The personal story behind Passing

Belfast isn’t the only black and white film in contention. Overlooked entirely by the Oscars but up for four BAFTAs, Passing tells the story of two black women who could both “pass” as white but choose to live on opposite sides of the colour line.

The film sees actress Rebecca Hall make her directorial debut, having secretly written the screenplay almost a decade ago.

Nominated for outstanding debut by a British writer or director, she said she was motivated to tell the story as it resonated personally; her grandfather was African-American but “passed” as white, although little was discussed about it within her family when she was growing up.

Climate change satire and sci-fi blockbuster in the running

Adam McKay’s Don’t Look Up is one of the more polarising films at this year’s ceremony, nominated for four awards.

An allegory about the climate crisis, the filmmaker’s satire about political indifference to an impending comet catastrophe was adored by activists, hated by some critics.

McKay said the film’s release was “such a roller-coaster”.

“Online there were these debates, people were arguing with critics, and I have never experienced anything like it,” he said. “So every one of those nominations was really appreciated and for a movie this tumultuous to get that kind of love is definitely a good thing.”

One of the biggest questions of the night is just how many awards cinematic sci-fi spectacle Dune will take home.

Leading the pack with the highest number of nominations – 11, including many of the technical categories such as visual effects, sound, production design and editing – much like going up against the film’s giant sand worms, how scared should its rivals be?

If it can perform as well as it did at the box office, it might just be the one to look out for.