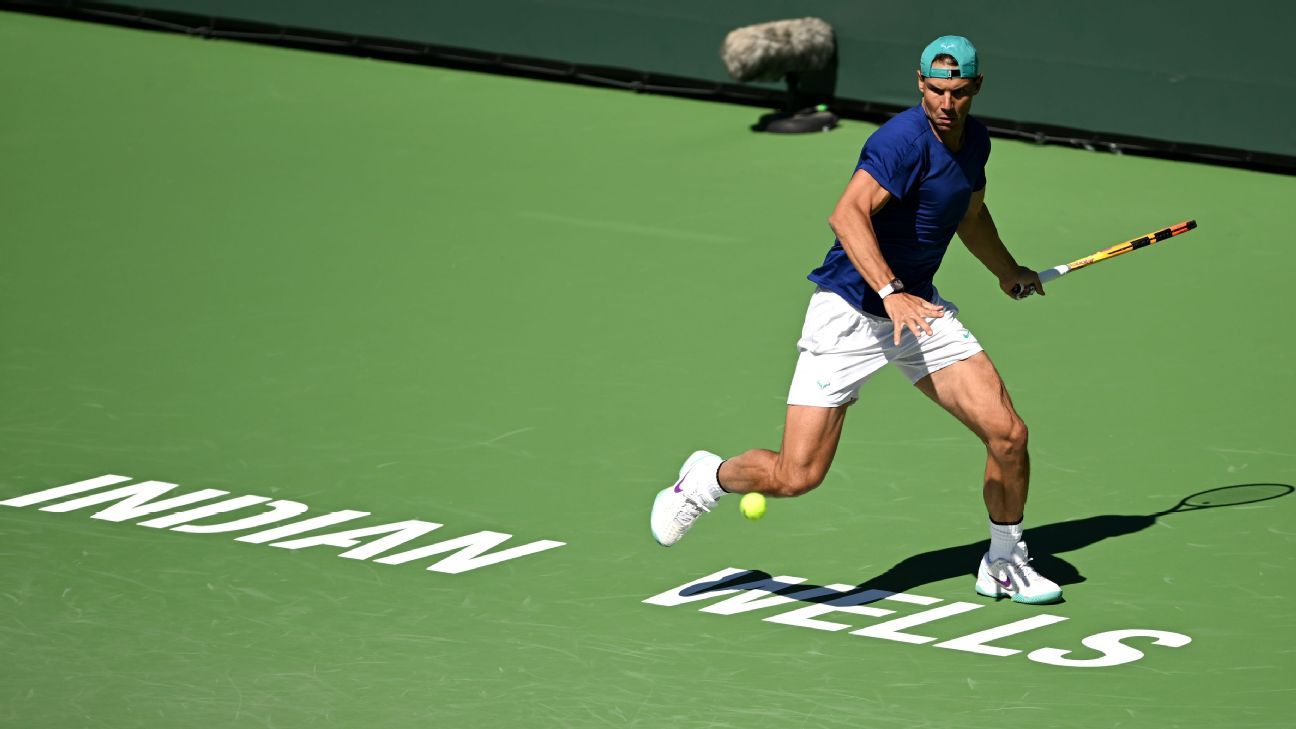 The potential for a Rafael Nadal vs. Daniil Medvedev semifinal showdown. A blockbuster Naomi Osaka–Sloane Stephens first-round matchup. A full-capacity crowd. And a relaxed desert vibe to go with it all.

It’s been three years (!) since the BNP Paribas Open has been played during its normally scheduled slot on the tennis calendar, but the event is back to its traditional March date — and the main draw is set to get underway on Wednesday in Indian Wells, California.

The tournament was the first event of the 2020 tennis season to be canceled due to the pandemic, and the 2021 staging of the event was postponed until October.

In 2022, though, trust us when we say there is a lot to be excited about — even with the absence of many big names. With stars and storylines to go around, here’s what you need to know entering what many refer to as the year’s “fifth major.”

Ukrainian, Russian and Belarussian players in the draw

With so many players from Ukraine, Russia and Belarus, the Russian invasion of Ukraine will remain a central focus in Indian Wells, as it has throughout the world.

Many of the Ukrainian players have been vocal about what’s happening in their native country, and pleaded for support from the tennis community and governing bodies. Elina Svitolina initially withdrew from her first match at the Monterrey Open last week because she was playing Russian player Anastasia Potapova. She asked for players from Russia and Belarus to be recognized as “neutral athletes,” and said she wouldn’t play any player from either country until such action was taken.

In response to such pleas, the WTA and ATP, as well as the Grand Slams and the International Tennis Federation, announced they would allow players from Russia and Belarus to participate but would not be playing under their countries names or flags. Svitolina ultimately played her match against Potapova, wearing the Ukrainian flag colors of blue and yellow, and her emotional reaction following her victory went viral.

“I was on a mission for my country,” Svitolina said after the match. She ultimately reached the quarterfinals at the event and pledged to donate all of her earnings to the Ukrainian army.

Dayana Yastremska, who had to flee from Ukraine with her younger sister once the attack began, also said she would be donating all of her prize money from reaching the final in Lyon last week, to the Ukrainian army. Yastremska was granted a last-minute wild card to play in Indian Wells.

On Tuesday, Andy Murray said he would donate all of his prize money this season to UNICEF’s efforts to help children in Ukraine.

I’m going to be donating my earnings from my prize money for the rest of the year, but anyone in the UK can support UNICEF’s humanitarian response by donating to our appeal by following this link – https://t.co/Z2mNGQ3xh8

Daria Saville (formerly Gavrilova), who advanced to the main draw through qualifying, urged her fellow players to wear blue and yellow during the event to show their support. Saville, who lives in and represents Australia, was born in Russia and her parents are still there.

Who’s gonna join me wearing 💙💛 at @BNPPARIBASOPEN ?! Or at any tournament really!

No Novak, and other notable absences

While he is currently the No. 2 seed in the draw, Novak Djokovic‘s status for the tournament remains uncertain due to his decision not to receive the COVID-19 vaccine. The 20-time major champion had been hoping to play at Indian Wells but told reporters in Dubai last month it didn’t look as if he would be able to enter the United States. He had yet to comment further as of Tuesday night, but the tournament itself issued a statement: “It has not been determined if he will participate in the event by getting CDC approval to enter the country.”

Novak Djokovic is on the tournament entry list, and therefore is placed into the draw today. We are currently in communication with his team; however, it has not been determined if he will participate in the event by getting CDC approval to enter the country.#IndianWells

It’s just the latest public drama for Djokovic during what has already become a chaotic season. Following a legal battle and a global media storm, Djokovic was deported from Australia in January after his visa was revoked by the Australian government.

He has since said he would be willing to skip majors in the future if a vaccine was required. “Yes, that is the price that I’m willing to pay,” Djokovic told the BBC in February.

As a seeded player he has a first-round bye and would not begin play until Saturday at the earliest. He is scheduled to play the winner of the opening-round match between Jordan Thompson and David Goffin.

While his absence would certainly be the most polarizing, if he is unable to attend, he would be just one of many big names not making the trip this year. World No. 1 and reigning Australian Open champion Ash Barty announced she would be missing both Indian Wells and Miami because she hadn’t fully recovered from her championship run in Melbourne.

“I love these events and am sad not to be there competing, but getting my body right must be my focus,” Barty said in a statement.

Danielle Collins, who played Barty in the Australian Open final, will also miss the event with injuries. Serena Williams, Venus Williams, Roger Federer, Dominic Thiem, Bianca Andreescu and Anastasia Pavlyuchenkova are all opting out as well. Barbora Krejcikova was the women’s top seed in Barty’s absence but she withdrew on Tuesday, after the draw was announced, due to an elbow injury.

Paula Badosa and Cameron Norrie, the 2021 champions, will be competing, however, and will look to defend their titles.

King of the hard-court?

Remarkable is an understatement for Rafael Nadal’s season so far. In addition to that whole “Winning the Australian Open and setting the record for most titles in Grand Slam history” thing, he’s notched two other titles and has a perfect 16-0 record on the year.

During the Mexico Open last month he didn’t drop a set, even in a semifinal clash against Medvedev on his way to the trophy.

So yeah, not too shabby for a guy known for his dominance on clay — and not hard-court — and who was dealing with a potentially career-ending injury just six months ago.

Nadal enters the BNP Paribas Open ranked No. 4 and as a three-time champion of the event. He last won in the desert in 2013 but was already right at home as soon as he arrived last week.

With momentum very much on his side, it seems misguided to bet against him at this point.

Nadal is far from the only player riding some serious momentum and looking to capitalize on recent success. Some others to keep an eye on:

Leylah Fernandez: The surprise 2021 US Open finalist successfully defended her Monterrey Open title on Sunday with a thrilling three-set final win over Camila Osorio in which she saved five match points. Can the Canadian teen follow up that epic of a performance with a dominant run here? (If you watched her in the US Open, you know the only answer to that is, “Why not?”)

Felix Auger Aliassime: He finally snapped his winless streak in final appearances with the first ATP title of his career at Rotterdam last month with a straight-set victory over Stefanos Tsitsipas. The Canadian followed that up with yet another final appearance at the Open 13 the next week. His breakthrough to the top of the sport has seemed inevitable for some time, but that time very well might be now.

Andrey Rublev: The world No. 7 defeated Auger Aliassime for the Open 13 title and he then followed that up by winning the doubles crown (with Denys Molchanov) and earning yet another singles title the next week in Dubai. He is playing some of the most consistent tennis of his career and brings a nine-match win streak to California. The Russian wrote “No war please” on the camera following his semifinal victory in Dubai.

Jelena Ostapenko: The 2017 French Open champion is having a resurgent season and won the Dubai title last month by defeating four Grand Slam winners en route to the final. She reached the semis in Qatar the next week and now holds her highest ranking (No. 12) since 2018.

Iga Swiatek: The 2020 Roland Garros champ was dominant in Qatar, defeating three top-10 players and dropping just one set en route to her fourth career title. She is now ranked a career-high No. 4, and with Barty’s absence over the next two tournaments, including in Miami where she is the defending champion, Swiatek could make it interesting among the top of the rankings.

Sloane Stephens: The former US Open champion won her first match of the year in Guadalajara last month — and then went on to win her first WTA title since 2018 at the tournament. Her celebration posts should be reason alone to want her to have a deep run at Indian Wells. But it won’t be easy. First up for Stephens is Naomi Osaka.

After a challenging 2021 season, Osaka made her return to the court Down Under in January as the defending champion at the Australian Open. Her third-round exit caused her ranking to plummet to No. 85 and she initially needed a wild card for entry in Indian Wells. (With Camila Giorgi‘s withdrawal due to injury, Osaka moved into the main draw via direct entry earlier this week. Yastremska received the open wild-card spot.)

Osaka hasn’t played since Australia so it remains to be seen how match-ready she will be. But the four-time major champion remains one of the best in the world on hard-court when she’s at her best, and seemed to have rediscovered her joy for the sport in Melbourne.

Osaka won the title here in 2018, and is playing close to her Los Angeles home, so Indian Wells could very easily be the site of her return to championship form. And if that happens, good luck to all of her opponents. They’re going to need it.

Osaka isn’t the only former major champion who has struggled recently and needed a wild card to play in the event. Sofia Kenin, who won the Australian Open in 2020, saw her ranking fall into the 90s after a first-round loss in Melbourne in January. She has yet to record a win since, having lost in her openers in both Dubai and Qatar. She’s now ranked No. 130 and is desperately trying to salvage her already nightmarish season.

Three-time major champion and fan favorite Murray also received a wild card to play in the event as he continues his long comeback from hip surgery. Murray reached the third round at the tournament in 2021, but really made his mark on the event after he publicly shared the story of his lost wedding ring in a saga that gripped the tennis world.

He’s undoubtedly hoping to fare better on and off the court this year.