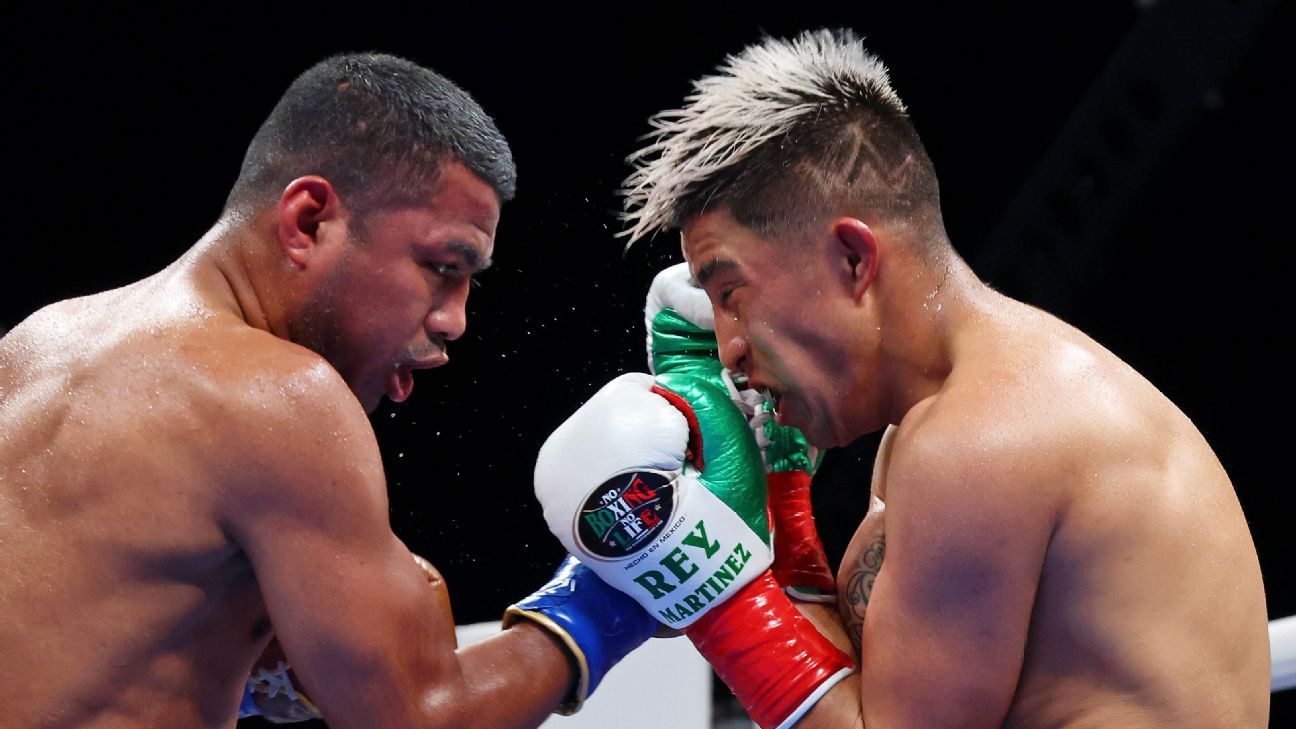 Roman “Chocolatito” Gonzalez proved on Saturday that he’s still one of the best fighters in the world, but more so, that age isn’t slowing him down.

His masterclass performance en route to a unanimous-decision victory over Julio Cesar Martinez was just the latest impressive outing in a Hall of Fame career filled with them. Gonzalez could be headed to a rescheduled third bout with Juan Francisco Estrada, but Martinez’s future is less clear after the kind of career-altering beating he sustained.

In the co-main event, Mauricio Lara kept building momentum with a wild knockout of Emilio Sanchez in the third round of a slugfest. At this point, Lara simply deserves a title shot in his next outing and it would be unfair if it didn’t materialize.

On Friday night, Jose Ramirez reminded the boxing world that he’s still a player at 140 pounds when he grinded out a unanimous-decision win over Jose Pedraza. With Josh Taylor set to relinquish his four junior welterweight titles to move up in weight, Ramirez is well-positioned to become a two-time champion in his next bout. But against whom should he fight?

Let’s answer that question and more after a high-stakes weekend of boxing:

Gonzalez was left for dead as a top-tier fighter after he was knocked out by Srisaket Sor Rungvisai in 2017. Since the loss, he’s scored wins over Kal Yafai and now Martinez to go along with a controversial decision defeat against Estrada last March. His comeback is one of the most impressive in recent memory.

Nicaragua’s Gonzalez and Mexico’s Estrada were set to meet a third time on Saturday, but the fight was cancelled after Estrada tested positive for COVID. Martinez had the opportunity to derail the Estrada bout, but following another marvelous showing from “Chocolatito”, the trilogy is more pressing than ever before.

Considering they already closed a deal for the bout, it would be surprising if it wasn’t rescheduled for later in 2022. And it also wouldn’t be surprising if Gonzalez scored another victory over Estrada, who is ESPN’s No. 8 pound-for-pound boxer.

“Everyone knows that the last fight I had with ‘Gallo’ Estrada, I won,” Gonzalez said.

His performance against Martinez left no doubt with the judges as he poured punishment on the Mexican from start to finish with dizzying combinations from seemingly every angle. Uppercuts and left hooks were mixed with right hands to the body time and again. Martinez never had an answer in what amounted to a mismatch.

But before Gonzalez considers one of those daring matchups, he should remain at 115 pounds and settle unfinished business with Estrada and then Rungvisai.

Martinez was overweight Friday at 116.4 pounds, but after he was thoroughly outclassed by Gonzalez in a fight contracted at 115 pounds, it’s clear his future remains at 112.

“He looked too small, he looked too inexperienced,” promoter Eddie Hearn said. “He’ll go back to flyweight.”

Martinez provided thrills in spurts on Saturday, winging haymakers from distance and daring Gonzalez to hit him square on the chin with his hands at his waist, but he never threatened to win the fight. Size might have played a factor, but Gonzalez is simply too good as well.

At 112 pounds, where Martinez is a champion and rated No. 1 by ESPN, he won’t have to encounter anyone approaching Gonzalez’s greatness. For years, flyweight champion Sunny Edwards has lobbied for a bout with Martinez, and that matchup remains viable once Martinez rebuilds his confidence. The fight presents a fascinating duel of styles. While Martinez attacks with reckless abandon, Edwards boxes with guile and patience from the outside.

There’s a bit of history, too. Martinez fought Sunny’s older brother, Charlie Edwards in an August 2019 title fight. Martinez badly hurt Edwards in Round 3 before the Englishman took a knee. While kneeling, Martinez delivered a crunching left to the body. Originally ruled a third-round KO, the bout was later overturned to a no contest due to the foul.

Lara on cusp of title shot

Lara, a 10-1 underdog, wasn’t well-known when he entered the ring against Josh Warrington last February, but he announced his arrival with a ninth-round stoppage victory. The win should have made Lara a champion, but Warrington vacated his belt prior to the bout. After the September rematch ended in a second-round no contest due to a clash of heads that left Lara with a nasty cut over his left eye, he returned Saturday with another scintillating performance.

Lara, 22, dropped Emilio Sanchez in the first-round, but was in serious trouble in Round 3 after a flurry from Sanchez. However, Lara, stormed back and scored a brutal knockout with a hellacious right hand that landed one second before the bell.

The violent nature of the fight was thrilling, and the knockout is sure to land on highlight reels, but Lara is more than just an action fighter. Rated No. 2 by ESPN at 126 pounds, Lara is long overdue for a featherweight title shot.

A matchup with fellow Mexican action fighter Emanuel Navarrete, a titleholder, would be a must-see bout between ESPN’s top two featherweights. A title fight between Lara and Mark Magsayo, who upset Gary Russell Jr. in January, would also be highly anticipated for the action it would deliver.

And then there’s Leo Santa Cruz, who remains a featherweight champion and could return to 126 pounds. One more viable option: the winner of Saturday’s bout between Leigh Wood and Michael Conlan.

Victory opens opportunities for Ramirez to become a two-time champion

Jose Ramirez delivered the kind of reliable, consistence performance fans are used to seeing from the former champion. In his first fight since losing his titles to Josh Taylor in May, Ramirez, 29, didn’t do anything extraordinary in the ring, but his workmanlike approach was once again enough to grind out a win over a solid contender.

Ramirez never stops coming forward, even if he’s being countered. That’s his style. That strategy has served him well and the unanimous-decision victory against Jose Pedraza on Friday lines Ramirez up nicely for a chance to become a two-time champion.

Taylor was lucky to escape with his titles last weekend in a fight with Jack Catterall and after the controversial victory Taylor revealed plans to campaign at 147 pounds moving forward and that means he will relinquish those four belts, making them available to the top contenders at junior welterweight.

Ramirez will surely land one of those opportunities, and there’s plenty of intriguing options for his opponent.

Jose Zepeda, who dropped a disputed decision to Ramirez in February 2019, is the WBC No. 1 contender while Ramirez is rated No. 2. There’s a good chance the Ramirez-Zepeda rematch materializes next for the vacant title.

But there are plenty of other potential options for Ramirez. Teofimo Lopez Jr., who lost his undisputed 135-pound championship in November against George Kambosos Jr., will move up and campaign at 140 pounds moving forward, and could meet Arnold Barboza in his junior welterweight debut. After that, a fight against Ramirez could be easy to make since both are Top Rank fighters.

Regis Prograis has long called for a fight with Ramirez. Prograis returns March 19 against Tyrone McKenna, and an expected win could lead to a future bout with Ramirez. But the most compelling option of all for Ramirez might be a matchup against Subriel Matias, a volume-punching fighter with devastating power — 18 KOs in 18 wins.

Whomever comes next, Friday’s return was a reminder that Ramirez always performs well but rarely wows. In a potential title fight with any of the fighters mentioned above, Ramirez will likely have to be even better the next time around.

Hancock: Ministers were warned about COVID deaths, but Johnson said ‘it will probably go away’
Toyota secures funding to develop hydrogen fuel cell version of its Hilux pickup in the UK
Some Meta employees claim they’re not getting promised severance
OPEC+ agrees to stick to its existing policy of reducing oil production ahead of Russia sanctions
Ex-British Army soldier David Holden convicted of manslaughter of Aidan McAnespie