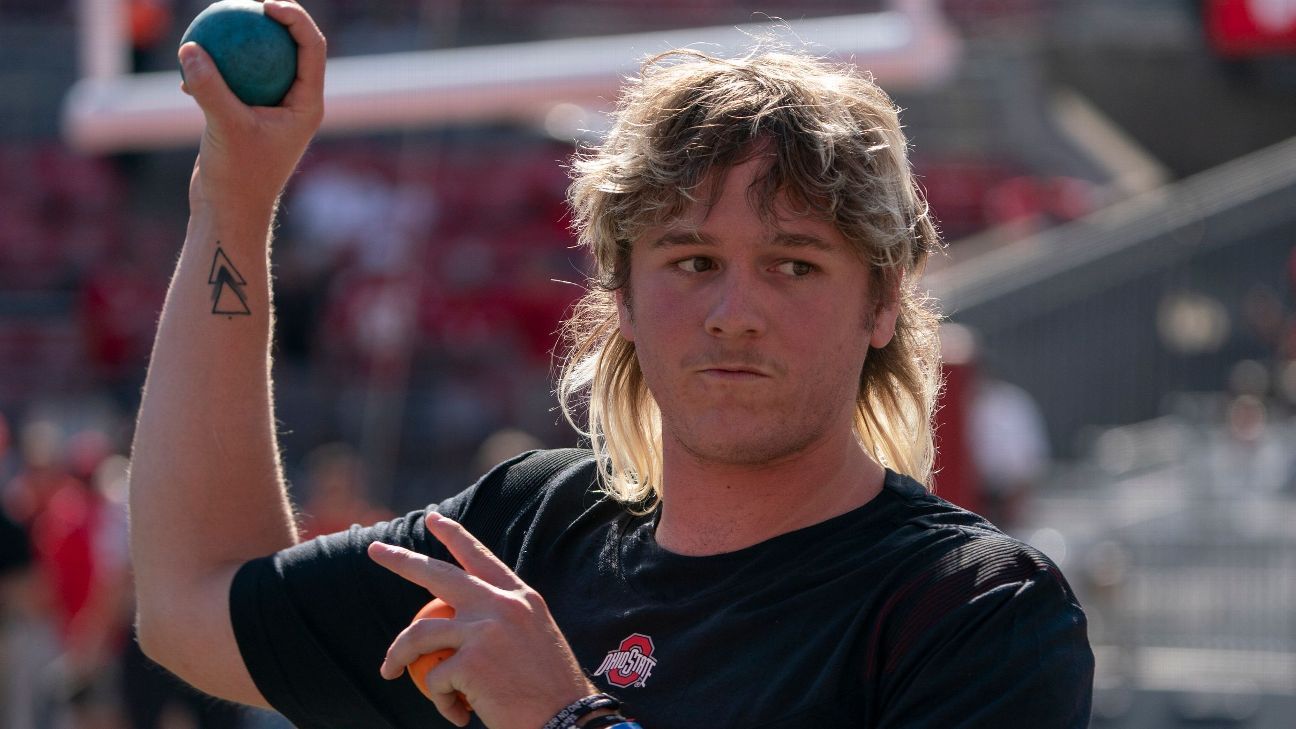 INDIANAPOLIS — The ballrooms that flank the hotel lobbies here at the NFL Scouting Combine have long marked the intersection of college football and the NFL, a collision of ambition and entrepreneurialism that comes at players’ professional crossroads.

Last week, a trading card company had nightclub smoke and oversized televisions for video games as a way to entertain players. Across the hall, a Pop-A-Shot machine flanked a financial planning company’s room. From sneakers to jewelry to NFTs, the opportunities for top prospects are boundless.

Amid the streets of Indianapolis at this year’s combine, however, a collective acknowledgement emerged that the Combine no longer represents an early beacon of professional opportunity for elite football players. The NCAA’s Name, Image and Likeness legislation, which was passed July 1, has redefined the traditional paradigms of how and when players can make money.

“Many see this as the end to college football as they know it, but in reality, NIL simply puts an end to the misnomer that is ‘amateurism,'” said David Mulugheta, a prominent NFL player agent with Athletes First. “College athletes are professionals, both on and off the field, and should be fairly compensated as so.”

In just a few months, the professionalization of amateur football players has indelibly changed the landscape. College players no longer have to wait until they are three years removed from their high school graduation to find formal representation or profit from marketing deals.

How drastically have things changed? Top NFL agents are now in the living rooms of elite high school stars recruiting them, which was unheard of a year ago. Elite college athletes are already legally making more than $1 million annually, with the forces of endorsements and collectives put together by universities likely to push that number higher. On college campuses, where agents once represented potential eligibility issues, there’s been a distinctly different approach.

“Agents are part of the new world,” Alabama athletic director Greg Byrne told ESPN in a phone interview. “Just like anything else, you need to deal in realities.

“And the reality is that it has been more of an embracing of agents than giving them the Heisman Trophy,” Byrne said referring to the stiff-arm schools would try to give agents in the past.

The 2021 Heisman Trophy winner, Alabama’s Bryce Young, is already represented by Creative Artists Agency. Clemson quarterback and early enrollee freshman Cade Klubnik, ESPN’s No. 28 recruit in the 2022 class, signed with Athletes First soon after arriving on campus in January. More star college players have agents finding them deals than don’t. NIL has expanded so quickly that longtime agent Drew Rosenhaus told ESPN that he has added multiple new employees to his staff to focus on NIL deals.

“Agents are becoming a much bigger part of college football than they’ve ever been before,” said Rosenhaus, whose sports firm (Rosenhaus Sports Representation) represents college stars like Blake Corum (Michigan), Tyler Van Dyke (Miami) and J.J. McCarthy (Michigan). “The universities have to embrace them. I don’t think it’s possible to be successful in college football if you don’t have a strong NIL department.”

The guidelines surrounding NIL remain vague and often vary from state to state. Some college leaders still project the potential for Congress to come in and set a national standard of regulations. But until that comes — if it ever does — NIL remains both integral to the future of college football and ambiguous as to how schools are supposed to handle it.

Technically, schools can’t arrange deals for prospects. But those guidelines come with the kinds of winks and nods that have long been associated with recruiting. Many schools are tied to collectives, which can then help the players find deals.

“College sports is becoming pro sports, and you’ve gotta have a plan when you’re recruiting kids, because everybody else does,” Cincinnati offensive coordinator Gino Guidugli said. “If you don’t, you’re gonna be put at a disadvantage.”

Perhaps the most celebrated early NIL test case came from Quinn Ewers, the country’s top 2022 recruit who reclassified last year and enrolled early at Ohio State. He did so, in part, because Texas law didn’t allow him to profit off his Name, Image and Likeness while in high school.

Ewers arrived at Ohio State toward the end of camp in August and took just two snaps for the Buckeyes last season. But his fame and potential helped yield deals that his NIL agent, Ron Slavin of Sportstars Inc., said will result in $2.4 million in income. Those included an autograph/memorabilia deal that’s worth $1.4 million over three years, equity in a Kombucha company and an undisclosed technology deal that has not yet been announced.

Ewers has since transferred to Texas, where he projects as the starting quarterback this year. Slavin believes in upcoming years that the elite players in college football, between collectives and endorsements, will be able to make more than $3 million annually. There are other perks, too, as Ewers has already received a new Corvette at Texas.

“The game has changed now, because the university and boosters have gotten smart to set up their funds to help go find NIL deals for the players, which has also become a recruiting tool,” Slavin said. “The rich are getting richer. The big Power 5 schools that have the funds set up are at a huge advantage.”

How much has the game changed? CAA agent Jimmy Sexton, who runs CAA’s football division along with its coaching division, told ESPN that the last year has been seismic.

“From the college side, this is clearly the biggest time of change I’ve ever seen in 35 years in the business,” Sexton said. “A lot of times, change is good.”

CAA agent Ed Berry, who is on the frontlines of NIL, pointed out that the NIL world has already changed drastically from when legislation passed in the summer of 2021. He said there’s three different revenue streams now available for players — traditional commercial endorsements, funds being paid from the schools’ collectives and the still-evolving world of group licensing agreements (GLAs) like the eventual return of the EA Sports video game expected in 2023.

“It has already changed drastically from July to March, and it hasn’t even been a calendar year,” said Berry, who works with Young.

Zach Soskin, the cofounder of Voltage Management, predicts there’s significant change in the future, as he said some of the money dedicated to lavish facilities, coaching salaries and buyouts will eventually be redirected to NIL out of necessity.

“NIL is the most efficient way to recruit and win games,” he said.

Obviously, the high-end endorsements and some GLAs require market sophistication. And that has prompted schools to suddenly covet experienced and established agents to work with their players. Cincinnati athletic director John Cunningham joked that wasn’t always the case, as his background in college athletics came in compliance, where agents were often a nemesis.

As Cunningham watched athletes like Desmond Ridder broker deals this year, which came through the help of Brian McLaughlin of VaynerSports, the expertise made things work smoothly.

“When our student-athletes didn’t have agents, it was much more difficult than when they had a good agent that was taking care of the marketing side,” Cunningham said. “That all works. I think that’s what this fall proved to me is that it does work. Where it starts not to work is when you start to pay players to come to your school that haven’t proven themselves. And the market is not dictating that.”

One of the consistent observations from the NFL side is that some of the same market truisms exist — quarterbacks and offensive skill positions are still in the most demand. There’s a reason Aaron Rodgers is seen in commercials a lot more than Aaron Donald.

Where collectives could throw things off is that they could end up creating an NIL market for defensive players that doesn’t reflect the professional marketing realities.

“You may make more money in college being a safety than you will in the NFL in marketing money,” Slavin said.

One overlooked aspect of NIL so far has been the hands-on education that it gives players, connecting them to contacts in their communities. While the eye-popping deals of athletes like Young and Ewers dominate headlines, the average NIL deal has been reported between $400 and $600.

Cincinnati tight end Josh Whyle has gone through a more traditional NIL experience as a star on campus, as he will be one of the country’s five best prospects at his position next season. He described a series of deals with a local Mexican restaurant (Zambrero), apparel companies and trading cards. The result has been local contacts, some money and gear and, perhaps most important, a fundamental understanding of business that transcends what could be learned in a classroom.

“I’ve been learning a lot,” said Whyle, who works with Athletes First. “There’s a lot to it in just kind of marketing yourself all the time, and networking, learning it’s not always about money. It’s about relationships.”

Ultimately, that learning process and being discerning with time management are transferable skills to players who will go to the NFL. As NFL teams met with prospects last week, it wasn’t a surprise that NIL emerged as a topic.