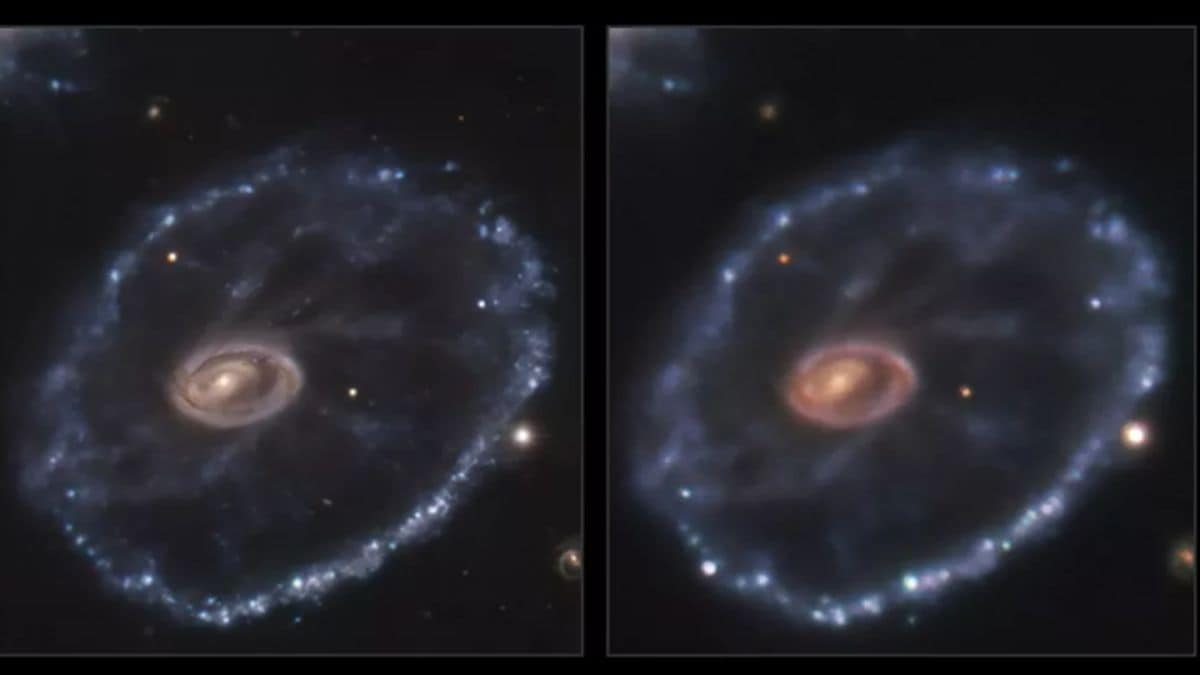 The European Southern Observatory (ESO) has captured an explosion occurring at the Cartwheel galaxy. The supernova, dubbed as SN2021afdx, has been identified as a Type II supernova. This type of supernova is formed when a large star runs out of the fuel that is required to keep the star from collapsing under its own gravity. The supernova also features hydrogen. The image, released by ESO, shows a bright spot in the lower-left corner, suggesting the presence of a supernova.

The two-ring shaped galaxy is located roughly 500 million light-years from Earth. The Cartwheel galaxy is a spiral galaxy in the constellation Sculptor. The galaxy had merged with a smaller neighbouring galaxy several million years ago, resulting in its two-ring shape.

ESO’s New Technology Telescope (NTT) in Chile has been used to capture the recent stellar explosion. Astronomers got the snapshot in December 2021. However, they noticed the existence of the supernova on the lower-left region of the galaxy only later.

A supernova or stellar explosion can be visible to observers for months and years. This supernova at the Cartwheel galaxy seems to be a fairly new one. When compared to images taken in August 2014 by the Multi-Unit Spectroscopic Explorer (MUSE) on ESO’s Very Large Telescope (VLT), scientists did not find any supernova in the old photos.

“Supernovas are one of the reasons astronomers say we are all made of stardust: they sprinkle the surrounding space with heavy elements forged by the progenitor star, which may end up being part of later generations of stars, the planets around them and life that may exist in those planets,” ESO said in the statement.

In order to capture the sight of the Cartwheel supernova, scientists have also used the NASA-funded Asteroid Terrestrial-impact Last Alert System (ATLAS) in Hawaii. The ESO’s Advanced Public ESO Spectroscopic Survey for Transient Objects (ePESSTO+), another project based in Chile, was also used in order to get some data for the project. Using these devices and data, scientists confirmed that the recent explosion was a type II supernova.

Retired general explains why tanks are so significant on the battlefield
FTSE 100 reaches all-time high
UK and US rule out sending F-16 jets to Ukraine – as No 10 says it would be impractical
‘Her children need her home’: Family of missing dog walker ‘stuck in a nightmare’ since she disappeared
Conor Daly open to last-minute Daytona 500 ride