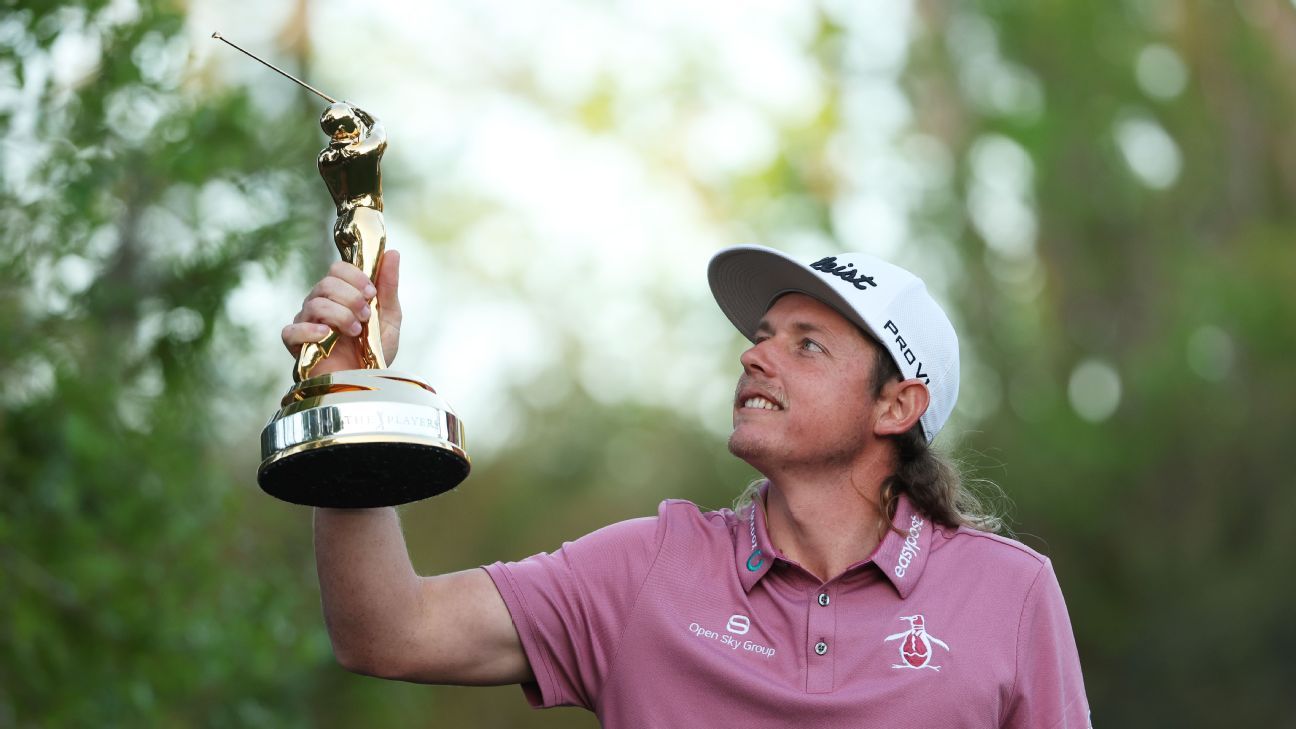 PONTE VEDRA BEACH, Fla. — Around 4 p.m. ET on Monday, after rain started falling again at the Players at TPC Sawgrass, Sepp Straka was the leader in the clubhouse with a 72-hole total of 7 under.

For a tournament that stopped and started more than the traffic on state highway A1A, and in which a player’s position on the tee sheet had almost as much to do with his chances of winning as chipping and putting, the final round was pretty dramatic.

When Straka walked off the 18th hole at the Stadium Course, there was a three-way tie for the lead. More than two dozen players were within three shots. It was anyone’s tournament to lose, regardless of his world ranking.

In the end, Australia’s Cameron Smith survived five days of golf that were plagued by thunderstorms, near-freezing temperatures and wind gusts of more than 40 mph. He won for the fifth time on the PGA Tour, beating India’s Anirban Lahiri by one shot. He had 10 birdies while shooting 6-under 66 in the final round and collected $3.6 million, the largest purse for a winner on the PGA Tour.

Smith, who now lives in Ponte Vedra Beach, Fla., won in front of his mother, Sharon, and sister, Mel, whom he hadn’t seen in more than two years because of COVID-19 travel restrictions.

“I haven’t seen them in two years,” Smith said. “It’s really cool to have them here. My main priority really was just to hang out with them and golf was second for these few weeks. It’s nice to see them and nice to get a win for them.”

Here’s what else we learned at the Players Championship:

Don’t worry about the big names

There were a lot of not-so-familiar names near the top of the leaderboard going into the final round. One of the reasons players like Lahiri, Doug Ghim, Russell Knox, Kevin Streelman and others were there was because many of the biggest names didn’t make the cut.

Access 4,300+ hours of live coverage from 35 PGA TOUR tournaments each year, including 4 days of coverage at 28 events with four feeds each day. Plus, access replays, originals and more. Stream on ESPN+

Even with the Masters less than a month away, it would be silly to get too concerned about how the top players performed. The first two rounds were played in outrageously difficult conditions and the entire tournament felt disjointed because of lengthy weather delays.

World No. 1 Jon Rahm also didn’t play well and never seemed to find rhythm. He shot 5-over 41 on the front nine on Monday, with three birdies, three bogeys and a quintuple-bogey 9, which came after he knocked two approach shots into the water on the par-4 fourth hole. It was the worst single-hole score of his career. Rahm shot 77 and finished in a tie for 55th.

“[On Saturday], I hit one shot and I went home,” Rahm said. “This is probably the weirdest event we can possibly have.”

Rory McIlroy and Justin Thomas were never really in the mix, either, and Dustin Johnson didn’t do much of anything until a final round of 9-under 63 helped him finish in a tie for ninth. He tied the course record for lowest round.

“It was a tough week,” Johnson said. “I just made too many mistakes, from the fairway, too. It wasn’t even when I got out of position. I hit too many bad iron shots from the fairway. I’ve got a little work to do still on the game, but obviously it’s in there. I just need to get it a little more consistent.”

Daniel Berger has somewhat of a reputation for being a stickler for the rules and a protector of the field, someone who isn’t afraid to raise his voice when something isn’t right.

The tables were turned on Monday.

As soon as Berger hit his approach shot on the par-5 16th hole, he yelled, “Water ball! That’s short.” He was correct. His short flared right and never had a chance of landing on the green. Instead, he went in to the pond.

That’s when the controversy started. While Berger and his caddie, Josh Cassell, had spotted the ball crossing the red hazard line closer to the green, his playing partners, Viktor Hovland and Joel Dahmen, had it much further back.

“I don’t think it crossed up there,” Hovland told Berger.

After Berger argued that it had, Hovland said, “I’m a little skeptical.”

Eventually, a rules official was called to the scene and told the players to work it out.

“I’m not going to take a drop that I don’t feel 100-percent correct about,” Berger said. “I’m not saying it’s all the way up there, but it’s not back there. … I’ve never taken a bad drop in my life.”

Berger continued to argue that his drop should be closer to the green, but then agreed to drop in an area between the two spots as a compromise.

“There’s absolutely no way it crossed back there, like zero-percent chance,” Berger said. “It’s wrong. That’s a bad drop here. I’ll drop it here if that’s where you guys want me to drop it, but it’s a bad drop. It’s way too far back.”

Berger ended up bogeying the hole. He shot 2-under 70 and finished in a tie for 14th.

Hovland said he and Berger didn’t talk about it after the round.

“We try to keep it professional,” Hovland said. “It’s not like we’re trying to dog on Daniel and trying to screw him over. It’s just, that’s what we believe, and he obviously felt strongly the other way. It’s just what it is. I’m not accusing him of anything.

“The golf ball is in the air for a couple seconds, so it’s tough to exactly pinpoint where it crossed and not. But Joel and I saw it in one way and he saw it differently.”

Luck of the draw (or tee sheet)

Usually, there are many factors that determine which player will win the Players, the PGA Tour’s premier event. Hitting fairways, ball-striking and controlling one’s nerves on the famous par-3 17th hole are among the chief ones.

Another big one this week? Luck.

A player’s tee time in the first two rounds, as much as anything else, might have determined which players had a chance to win. There were lengthy weather delays on Thursday and Friday, leaving some players to finish the first round and then begin the second on Saturday.

Players who were in the early/late waves and finished the first round on Thursday and Friday didn’t play many holes on Saturday (or any at all) and largely avoided treacherous 40-mph winds that wreaked havoc on their competitors. It was like winning the lottery. And with so much at stake, namely a $20 million purse, that’s unfortunate.

“You get your good ones, and you get your bad ones,” McIlroy said. “You have to believe that they all even out over the course of a year or a career, I guess. I’ve certainly been on the good side of a draw many times, and I’ve been on the bad side a lot, too. But at the end of the day, I feel like it all just sort of evens out. It sucks that the bad end of the draw is this tournament, but it is what it is.”

There’s no question it made a significant difference. Ghim was the only player in the top 15 after 36 holes who played in the late/early wave. In fact, among the 71 players who made the 36-hole cut, 44 teed off in the early/late wave; 27 were in the late/early wave. According to Justin Ray of Twenty First Group, the average score after 36 holes for players in the early/late wave was 144.9; it was 147.8 for players in the other half of the field.

After 54 holes, only one of the 14 players who were tied for eighth or better — Kevin Kisner — was part of the late/early wave. Five of those players — Lahiri, Paul Casey, Sam Burns, Tom Hoge and Shane Lowry –didn’t have to take a single swing on Saturday. Sebastian Munoz hit just one shot.

Kisner called it “pure luck” and went as far as to suggest the tournament lost some of its integrity because it was such a decided advantage for those players who didn’t face the challenging conditions on Saturday. He wasn’t alone.

“I’m one of those who believes that if this wasn’t the Players Championship, we would have not played [Saturday],” Rahm said. “I don’t know if they should have.”

Keegan Bradley was right there in contention to win the Players, which would have been his first victory in more than three years. But he went 3 over on the final two holes Monday and finished solo fifth. Bradley three-putted for a bogey on the par-3 17th and punched a ball into the water on the 18th after knocking his drive into the trees. He made double-bogey 6.

That wasn’t the only thing Bradley was still steamed about after his final round. On Saturday, he was assessed a two-stroke penalty for a rarely enforced rules violation. After knocking his second shot onto the 16th green, Bradley placed his marker on the green. Before he could pick his ball up, a wind gust moved it.

Bradley placed the ball back at its original spot, which is a rules violation, according to rule 13.1.d (2) of the Rules of Golf. He could only play from the original spot if he had marked and lifted the ball before it moved. The rule says: “If natural forces cause a player’s ball on the putting green to move, where the player must play from next depends on whether the ball had already been lifted and replaced on its original spot.” So, if the ball was not already lifted and replaced, according to the rule, “the ball must be played from its new spot.”

Bradley said he checked with his playing partners, Andrew Putnam and Cameron Young, to make sure he was following the rule correctly. On the second hole (Bradley’s group started on the back nine), he was informed of the penalty.

“It was a fluke thing,” Bradley said on Monday. “I was saying a million things had to happen all at once for this to happen. It was perfect timing, it was the gust … If I take one second longer or one second shorter, this never happens. I’ve spoken to a bunch of the guys. Not one player knows this rule. We all thought common sense says you put your coin down, that’s where your ball is. I didn’t want to break the rules by moving my coin. I was trying to do the right thing.”

“I put the coin down, and as I’m going to grab it, a huge gust of wind and it went,” Bradley said. “The rule actually states you have to pick the ball up, so the coin means nothing for whatever reason. I’d like to hear the USGA’s explanation for that. They seem to like to screw everything up.”