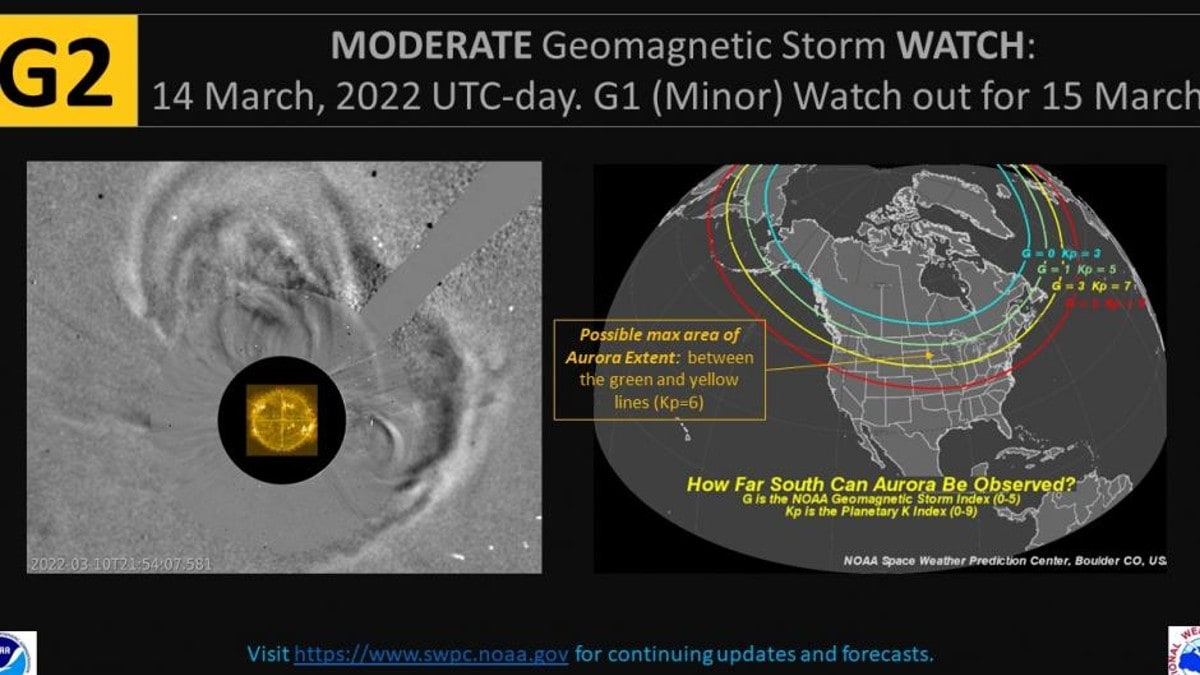 After a moderate solar flare shot out of the Sun’s atmosphere several days ago, Earth could be slammed by a series of small geomagnetic storms today (March 15). The US-based National Oceanic and Atmospheric Administration (NOAA) and the British Met Office predicted that the astronomical phenomenon will have an impact on Earth over the next two weeks. Both NOAA and the British Met Office also issued advisories for mild and moderate geomagnetic storms during the next few days. The storms are unlikely to inflict any damage on Earth, except perhaps to radio broadcasts and power grid stability at high latitudes.

However, the aurora borealis — a beautiful light show in the sky seen usually in high latitude areas — may be visible at lower latitudes than usual. A three-day outlook by the NOAA had predicted that there was an 80 percent chance of a major storm on March 14.

Based on NOAA’s five-level solar storm scale (G5 being the most extreme), the storms were classified as a G2 on Monday (March 14) and a G1 on Tuesday (March 15). According to NOAA, Earth encounters around 2,000 category G1 and G2 solar storms every decade and is now in the midst of a mild solar storm streak; the most recent G2 storm touched Earth on Sunday (March 13), going over early in the morning without causing much trouble.

About the aurora forecasts for the Northern as well as Southern Hemispheres for March 14, the British Met Office had stated, “The auroral oval is expected to be slightly enhanced at times during 14th March as a result of a Coronal Mass Ejection (CME) arriving at Earth yesterday.”

The auroral oval is expected to be slightly enhanced at times on March 14 because of a Coronal Mass Ejection (CME) arriving at Earth yesterday.

Space weather physicist Dr Tamitha Skov, who had predicted the solar storm to hit Earth, tweeted that the “first half of this solar storm brought us multiple bursts of aurora but the second half turned off the show quickly”.

Like a Light Switch: As advertised, the first half of this #solarstorm brought us multiple bursts of #aurora but the second half turned off the show quickly! We’re in the trailing edge of the storm now, which has an “ENW” core. #Amateur radio & #GPS users love these conditions! pic.twitter.com/Q9AWyvU9Gk

In another tweet, Skov mentioned about the radio bands being disrupted, and added that “switching to lower frequencies might help”.

Many reports of impacted amateur #radio propagation today. The rather sporadic magnetic field in this #solarstorm is really disrupting the bands. Switching to lower frequencies might help. They are less impacted by #solarstorms, especially on Earth’s nightside. Thx for reporting! https://t.co/BK5ubQKqcX

In an earlier tweet on March 12, Skov had mentioned about the storms and aurora 5-day outlook. She had tweeted, “Busy week with a triple threat! A big solar storm is coming sandwiched between a glancing blow from a previous solar storm and some fast solar wind.”

Solarstorm & #Aurora 5-day Outlook: Busy week with a triple threat! A a big #solarstorm storm is coming sandwiched between a glancing blow from a previous #solarstorm & some fast #solar wind. In each table, top row shows what is expected, bottom shows possible maximum activity. pic.twitter.com/qFm7oJytk8

Electrical blackouts have been known to occur as a result of geomagnetic storms, which have been known to wreak cause damage to power networks and radio communications. While the Earth’s atmosphere and magnetosphere provide considerable radiation shields on the ground, astronauts are susceptible to possibly fatal radiation poisoning.

The most visible effects of a geomagnetic storm, however, are the colourful displays of aurorae known as the Northern and Southern Lights. They are typically only visible at the North and South poles.

When the Sun emits massive bursts of energy in the form of solar flares and coronal mass ejections (CMEs), solar storms occur. Since mid-January, the sun has been shooting forth CMEs virtually every day, according to NOAA, though not all of them have crossed paths with the Earth. Solar flares can have the destructive power of billions of nuclear bombs.

Universal credit: Families falling into crisis
Gaming’s Oscars night is upon us – here are our picks for the top awards
Giroud and Mbappe both break records as France reach World Cup quarters
Weird Alibaba: 4-door $4.5k Chinese electric pick-up truck for off-road adventures
The race for space: Home rental prices up by 20%