WeCrashed – out on Apple TV+ now 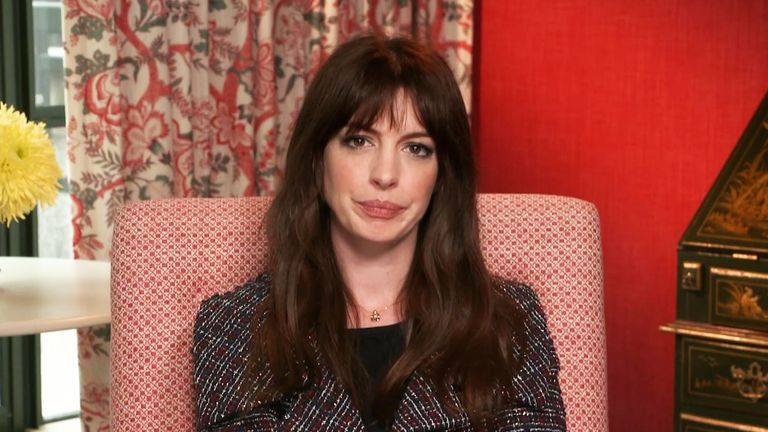 Anne Hathaway speaks about the unconventional characters in her new series WeCrashed on Apple TV.

Anne Hathaway has told Sky News she was inspired by the infamous Fyre Festival flop for her new drama series about the rise and fall of business empire WeWork.

WeCrashed tells the story of how flexible workspace provider WeWork grew from a single co-working area into a global “unicorn” – a private start-up business valued at more than $1bn (about £764m). In fact, in under a decade, it was valued at $47bn (about £36bn) – but then, in less than a year, saw its value plummet.

The drama stars Jared Leto and Hathaway as the business’s co-founder and former chief executive Adam Neumann and his wife Rebekah, who was the company’s chief brand and impact officer, and focuses on their relationship and rather unusual working practices.

Lee Eisenberg and Drew Crevello, who created the series, spent two years reading and listening to “every scrap of interview footage, every conference Adam and Rebekah attended”, and also hired their own researcher to speak to former employees and childhood friends of the couple, to “really delve as deeply as we could”.

Hathaway said it was seeing the Fyre documentary – about the “luxury” Bahamas music festival in 2017 that was branded a scam – that made her want to get involved.

“They are unconventional and there is intensity to them, for sure,” she said, of the characters of Adam and Rebekah Neumann. “The thing that really made me want to do the series was I saw the Fyre [festival] documentary and I just thought, what is it about this thing, this fake it till you make it thing? And people who don’t know when to say the evidence doesn’t support the dream anymore.

“It’s something we’re seeing again and again in many different ways, certainly in the story of WeWork. So I was very interested in that and exploring that – not judging the people that do it, but actually saying, what is it that makes someone… I don’t know, not be able to see things as clearly as others from the outside of it might be able to see.”

The story of WeWork

After publishing documents ahead of WeWork’s planned listing in 2019, analysts and investors started asking some difficult questions.

They were in part worried about the outsized role, and behaviour, of Adam Neumann, and raised questions about the company’s ability to make a profit.

In the space of a month, the firm ended up slashing its valuation to $10bn from $47bn, and put off its public float at that time.

Japan’s SoftBank, a major early investor, stepped in to keep the company afloat, and the company still operates, albeit on a less grandiose scale.

The story of the firm’s downfall has already been the subject of books and documentaries and the WeCrashed podcast series, on which Hathaway’s new Apple TV+ drama is based.

Backing up the Hollywood dream

Hathaway has been in the business for 20 years, having starred in films including The Devil Wears Prada, Brokeback Mountain and The Witches, and winning an Oscar for best supporting actress for her performance in Les Miserables.

In that time, has she come across Hollywood’s version of those who aren’t able to back up the dream?

“I’m very lucky because I’ve been doing it for a while now, so you kind of learn to get a sense of who the dreamers are and the people who practically know how to make things a reality,” she said.

“But you know, it’s a tough business and sometimes things that you feel like are going to be real, don’t pan out or they become real and they’re different than you think they’re going to be.

“I just feel very lucky that I’m able to do it as long as I have, and I’ve had experience with all kinds of outcomes.”

It may come as a surprise to men, but dating can be dangerous, and many women will relate to the lead character in Daisy Edgar-Jones’ new film as she navigates the difficult world of online dating – and the behaviours that come with it.

The star became a household name during the pandemic playing Marianne Sheridan in the TV adaptation of Sally Rooney’s best-seller Normal People.

The show was a huge hit for the BBC, getting over 62 million streams on iPlayer in 2020, making it their biggest series of the year.

She admits it’s been an odd time – though of course not just for her. 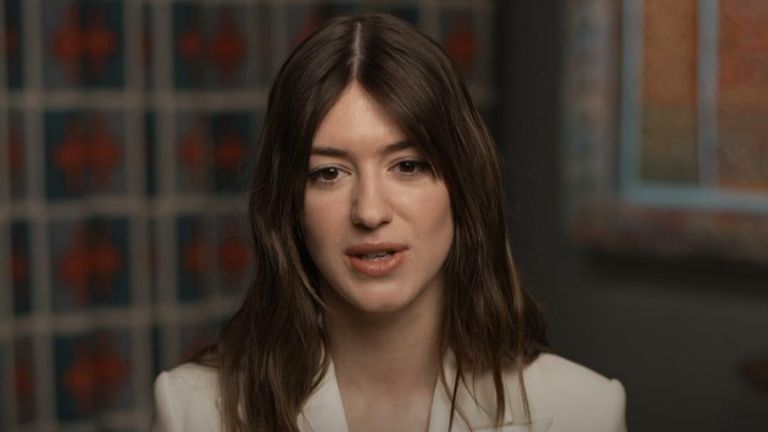 “I mean, it’s been a wild ride for us all and it definitely is strange going into a pandemic one way and coming out and it being quite different,” Edgar-Jones told Sky News.

“It has been sort of crazy.”

Black comedy thriller Fresh was one of the opportunities that came her way after Normal People, and Edgar-Jones says exploring darker themes though a female lens drew her into the project.

Read more: Daisy Edgar-Jones on exploring the horrors of dating and the daily fears women face

Ashley Walters says the TV industry is learning in the wake of allegations of bullying and harassment against high-profile names, including his former co-star Noel Clarke.

Last year Clarke was accused of sexual harassment and bullying over a number of years after 20 women came forward to describe abuse to The Guardian newspaper – allegations he denies.

Clarke was then dropped from future productions by Sky and production company Vertigo Films who made Bulletproof, while BAFTA also suspended his membership and revoked a recent award.

Walters says it’s important for everyone – not just those who have been accused – to make changes.

“The industry’s learning lessons on a daily basis when it comes to Me Too, and a lot of the other things that have come to our attention,” he said.

“I guess it’s just for all of us to really understand protocol on set and creating safe environments for people to be able to tell their truths and to tell what they’re going through.

“I think that’s one of the main things I would say going forward, with any show that I’m involved with is there needs to be that space for people to be able to talk about what they’re going through, whatever that may be.”

You can listen to our interviews and hear our reviews in this week’s Backstage podcast. As well as WeCrashed, Fresh and Top Boy, our Backstagers are also unpacking the South by Southwest Festival (SXSW) and digging into Ben Affleck’s performance in Deep Water (on Prime Video now).