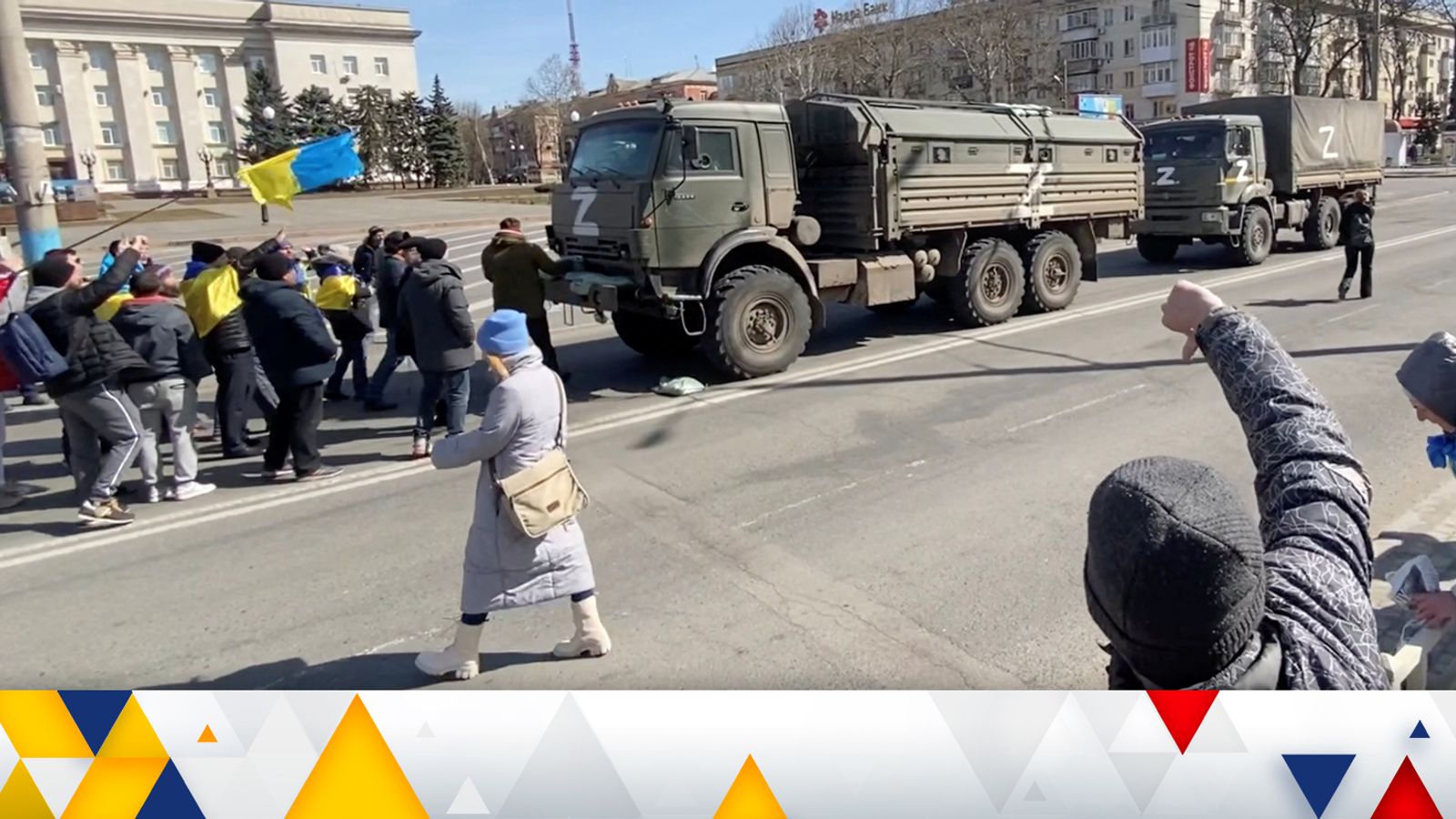 Residents in the Ukrainian city of Kherson have been filmed peacefully confronting two military vehicles with Russian markings on – and telling those inside to “go home”.

Demonstrators, some waving Ukrainian flags and others with flags draped over their shoulders, were seen in front of the trucks which had Z symbols on the front and sides, associated with the Kremlin’s military.

In a video obtained by the Reuters news agency, the protesters walking along Ushakova Avenue chanted at the forces to leave – as the vehicles were shown reversing, then turning around and appearing to depart the area.

Buildings and shops along the road matched those seen on satellite imagery, as well as file images of the area, according to Reuters.

Russia seized the southern port city early on in the nearly month-long war and Moscow claims it controls the Kherson region.

It comes as Ukraine’s deputy prime minister Iryna Vereshchuk said planned humanitarian aid for the city could not be delivered because the trucks were stopped along the way by Russian troops.

It’s a strategically valuable city, straddling both the Dnieper River and the Black Sea, and home to more than 280,000 people.

Analysts say controlling Kherson offers much to Russia’s forces by both blocking Ukraine’s access to the sea and linking the territories in Donetsk and Luhansk with the peninsula of Crimea.

But the occupation is not proving comfortable according to messages Sky News has received from a Ukrainian local resistance volunteer in the city on Friday, communicated through a contact in the UK.

Read more: A glimpse inside Kherson through eyes of Ukrainian resistance volunteer

Key developments in the Ukraine war:

• Ukrainian officials claim thousands of residents in besieged Mariupol have been forcibly relocated to Russian territory
• Russia says it struck Ukraine with cruise missiles from ships in the Black Sea and Caspian Sea, and launched hypersonic missiles from Crimean airspace
• Some 56 people were killed after Russian troops opened fire on an old people’s home in the city of Kreminna, Ukraine claims
• Ukraine’s deputy prime minister tells Sky News she believes genocide is being committed against Ukrainian people
• Pope Francis has denounced Russia’s “repugnant war” against Ukraine as “cruel and sacrilegious inhumanity”
• Ten million people have been displaced inside Ukraine or have fled abroad, the UN says

Earthquake hits Turkey and Syria killing at least 100 – and felt elsewhere in the Middle East
China threatens ‘further actions’ over US downing of suspected spy balloon
‘It changed me’: The investigation into one of history’s worst space disasters – and its legacy
Tesla’s infamous Full Self-Driving Beta v11 is coming this week if you believe Elon Musk
‘I don’t know how I am coping’