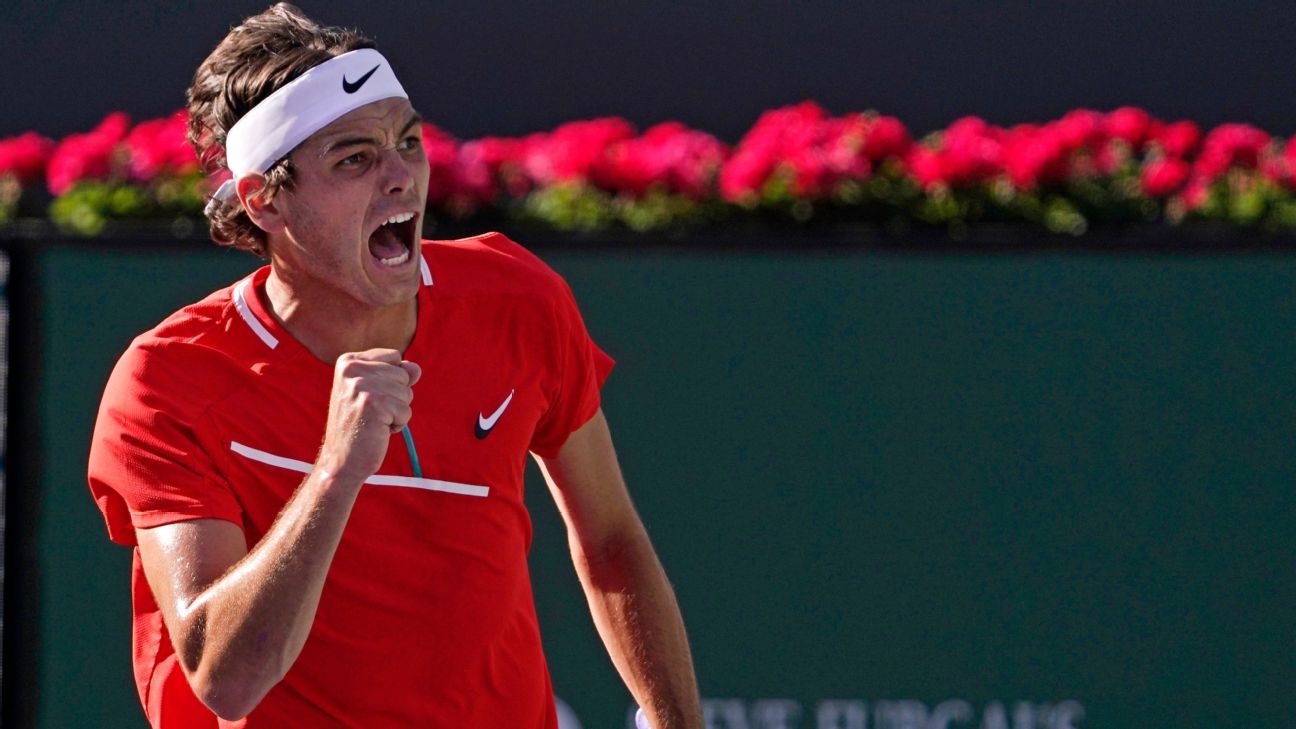 Rafael Nadal standing behind him and a captivated audience intently listening to his every word, Taylor Fritz finished his speech on the court at Indian Wells, his voice breaking as he looked toward his family and team in the stands.

“Winning this tournament is one of those crazy childhood dreams that you really think is never going to happen,” he said as the crowd roared and the tears began to fall down his face. “Thank you.”

Long considered one of the best hopes among the American men to contend for big titles, Fritz had won just once on the ATP Tour prior to Sunday at a 250-level tournament in Eastbourne in 2019. The 24-year-old California native, who had come to the tournament as a fan throughout his childhood, had an impressive run during his time at the BNP Paribas, including a straight-sets victory over Andrey Rublev in the semifinals, but few thought he could defeat Nadal, who was riding a 20-match win streak and had won his past three tournaments played, in the final.

And when Fritz had to abruptly end his practice on Sunday morning, wincing in pain, due to an ankle injury, many wondered if he would be able to play at all. His coaches even told him to withdraw ahead of the match to prevent further injury.

But Fritz has always been a fighter. After leaving the court in his second-round match at the 2021 French Open in a wheelchair due to a torn meniscus, he underwent surgery and still returned in time for Wimbledon less than a month later.

And against the far more seasoned and decorated Nadal, Fritz showed no signs of pain, nor of nerves, as soon as the match began. Fritz jumped out to a commanding 4-0 lead and didn’t lose a single point on serve in those opening games. It was Nadal who needed medical treatment after the first set, with what he later described as difficulty breathing and chest pain. While the second set was significantly more competitive, Fritz held on and battled for every point, ultimately winning in the tiebreak.

After winning the final point and handing Nadal his first loss of 2022, Fritz fell to the ground in a mixture of celebration and disbelief. Moments later, he couldn’t hide the emotion and he put his head in his hands and cried.

“I think to do it against Rafa in the end, that’s like the, I don’t know, icing on the cake,” Fritz told reporters after the match. “It’s just insane. Someone that I watched like dominate, win everything. Him and Roger, I grew up, I didn’t watch a ton of tennis growing up, but it’s tough to not know these guys, knowing they’re literally winning everything, their Grand Slam finals, all their battles.

“It’s insane to even be on the same court with these people, much less be able to beat one of them, to win such a big tournament. To do it here in Indian Wells, as well, the combination of all these crazy things that I never thought possible.”

Fritz became the first American, male or female, to win the title in Indian Wells since Andre Agassi in 2001, and the first countryman to do so at any Masters 1000 event since John Isner in Miami in 2018. Fritz will rise to a career-high ranking of No. 13 on Monday and overtake Reilly Opelka as the top-ranked male player from the United States.

Fritz played immediately after 20-year-old Iga Swiatek had defeated Maria Sakkari 6-4, 6-1 for the women’s title, their combined victories proving a new generation of tennis players had in fact very much arrived to the top of the sport and is capable of beating anyone on any given day. While Swiatek is already a major champion, she has been public since her breakthrough victory at the 2020 French Open about the need for consistency on the women’s side and pointed to what her childhood idol Nadal, and Djokovic and Roger Federer, had been able to do over their lengthy careers.

“I think the biggest change for me is going to be to be consistent,” Swiatek said after her triumph at Roland Garros. “I think this is what women’s tennis is struggling with. That’s why we have so many new Grand Slam winners because we are not, like, as consistent as Rafa, Roger and Novak.

Nadal showed just how hard it is to routinely win at the sport’s highest level on Sunday, even for those considered among the best of all time. But Swiatek found a way, yet again.

It was her fifth title on the WTA Tour, and third at the 1000-level and second of 2022. She is the youngest player to win a handful of trophies since Caroline Wozniacki in 2009.

On Monday she’ll move to a new career-high ranking of No. 2 in the world, and match Agnieszka Radwanska‘s record as the highest-ranked Polish tennis player in history.

“For sure,” Swiatek said when asked if titles are what she expects from herself now. “But on the other hand, that’s the first time I’m in a position where I won two tournaments in a row, so it’s all new. I think it’s getting easier for me to just focus on playing and not think about the stats. For sure it’s giving me a lot of confidence. Today I’m going to be thinking about that because I can, and I can enjoy and celebrate.

“But still, when I’m going to be playing in Miami [next week], I need to be, like, a hundred percent focused on the match. Every tournament is a different story. Even though we are showing the consistency, the players that I mentioned [Sakkari, Paula Badosa, Ons Jabeur and Anett Kontaveit] for sure, still any girl can win any WTA tournament.”

There’s been a shortage of consistency in women’s tennis since Serena Williams‘ maternity leave began in 2017. Since Swiatek won the pandemic-delayed French Open in October of 2020, there have been four different women’s major champions in five events. Swiatek is one of 14 women to have won a Grand Slam event since the start of the 2016 season. By contrast, Nadal, Federer and Djokovic have won all but four of those titles in that time frame.

But Swiatek has emerged, most notably alongside three-time major champion and world No. 1 Ashleigh Barty, as one of the few players who can win week after week and on more than one surface. Fritz still has yet to prove he is capable of doing that — and recorded his best result at a major earlier this year by reaching the fourth round at the Australian Open — but he will have his chance during the upcoming clay-court season.

During his postmatch news conference, he said he wasn’t sure if he would be able to play Miami, and would undergo an MRI on Monday before deciding, and didn’t make any promises about what to expect from him going forward. But he did indicate he wasn’t satisfied merely with Sunday’s victory and knew he could do more.

“I don’t want to get ahead of myself,” Fritz said. “I want to take things one step at a time. My goal for the last couple months has been top 10. This obviously helps a lot, helps a lot to kind of put me closer to that goal. That’s going to remain the goal for now, top 10.

“Obviously I’d love to go way higher than that and achieve way more than that. Like I said, take it one step at a time, not get ahead of myself, it’s just one tournament. Go back to work, never be satisfied with the good results. Just keep wanting more.”