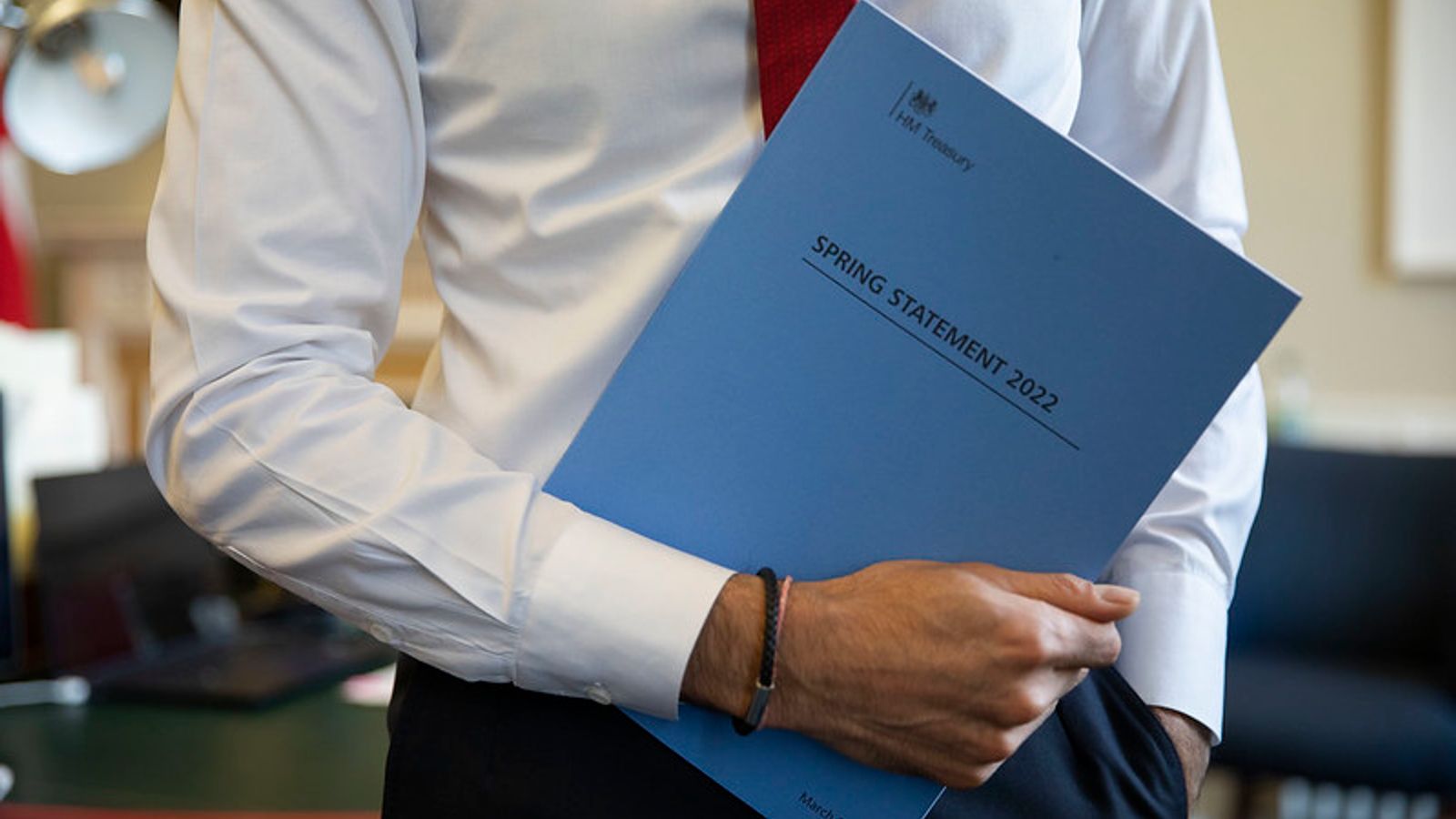 As he faces yet another mini budget on Wednesday, Rishi Sunak now suffers from having set expectations unsustainably high during his two years as chancellor.

At the start of the coronavirus pandemic, he pledged to do “whatever it takes” to support the economy. He subsequently received credit amongst the public and his colleagues for doing just that, at a cost north of £370bn.

On Sunday, Mr Sunak made a similar sounding promise, telling Sky News that “people should be reassured – I will stand by them”.

Another bold vow at a pivotal moment, but this time he has far less cash to satisfy expectations.

Watch and follow the chancellor’s spring statement on Wednesday from 12.30pm on Sky News

Latest public finance figures suggest he has a tax windfall just short of £30bn more than he expected to have at the time of last November’s budget.

Against that, he knows he faces the largest interest payments on government debt since records began and will say in the Commons that this is a reason for caution.

Mr Sunak doesn’t have the money to do everything Tory MPs want.

If he did, he would cancel the 1.25% rise in National Insurance next month, which would cost him £12bn a year, slash 10p off fuel duty costing £5bn a year, and remove green charges from electricity bills, costing at least £1bn a year.

On top of this, he is expected to provide some further help through the Universal Credit benefit system and could boost the Ministry of Defence budget.

All of this while preserving headroom against his fiscal rules so he can pay for tax cuts closer to a general election. He cannot please everyone.

So the big dilemma for Mr Sunak in the spring statement is whether he chooses to target help at the least well off or whether he helps everyone – including the middle class and the wealthy – at much higher costs to himself.

Mr Sunak made clear on Sky on Sunday that he would rather focus his firepower on the less well off – which could see him soften the impact of the National Insurance rise for the less well off by raising the personal allowance rather than delaying it for a year.

However there is a powerful Tory lobby demanding he helps everyone.

Today Mel Stride, the Tory chairman of the Treasury Select Committee, repeated his call for a one year delay:

“I think this is not a good move at his particular time. Either for consumers or for those in lower income households, but also for businesses…. So I think now would be a great time to delay that increase for just one year,” he told Sky News.

He will be judged on how he spreads his help between these two categories.

The challenge for Mr Sunak is whether his package of measures feels like it matches the challenge of the time.

Two weeks ago, the Treasury were planning a “minimal” update in the spring statement, deferring big measures until the autumn whether energy bills rise yet again.

It appears that Number 10 helped him come to the conclusion he needed to do more.

The reason why is evident up and down the country.

Soup kitchens set up to help the homeless are now reporting an explosion in the numbers of people with full-time employment begging them for food in just the last month.

The Resolution Foundation is suggesting that typical household incomes will fall by £1,000 over the next year, meaning the country is facing the biggest fall in income since the 1970s.

This is as big a dilemma for the chancellor as he faced during the pandemic. There are just fewer easy options he can help himself with.