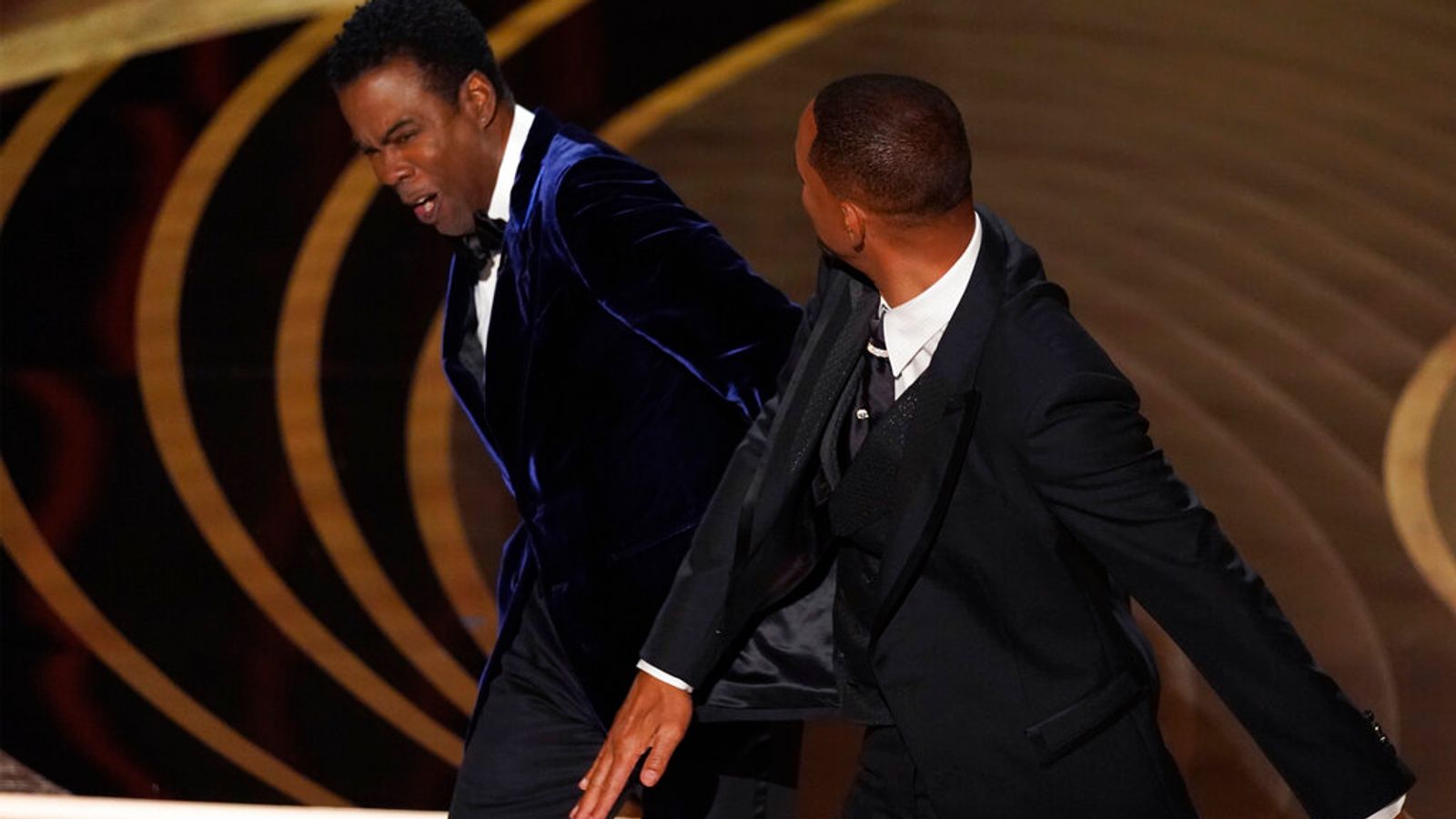 A tearful Will Smith has won his first ever Oscar, just minutes after rushing on to the stage and slapping comedian Chris Rock in the face.

The former Fresh Prince, who won the best actor gong for his role in biopic King Richard, was reacting to a joke Rock had aimed towards Smith’s wife, Jada Pinkett Smith.

Smith then walked up onto the stage, hitting out at Rock before returning to his seat and shouting: “Keep my wife’s name out of your f****** mouth.”

Read more: Oscar Awards 2022 live updates: Catch up on all the action from this year’s ceremony

Rock appeared shocked and flustered as he tried to resume presenting the best documentary feature category. He said: “That was the greatest night in the history of television.”

Introducing the next set of presenters, Sean Coombs joked about the testy moment, saying: “Will and Chris, we’re going to solve that like family at the gold party.”

During the commercial break, Smith and Pinkett Smith could be seen being comforted by actor Denzel Washington.

When, a little later in the night, Smith was announced as best actor, he received a standing ovation from the crowd.

The 53-year-old had been nominated for a gong twice before in his 30-year career. But it’s the role of Richard Williams – the determined father of a young Venus and Serena Williams – that has bagged him the prize.

Accepting his award, a tearful Smith said: “Ah man. Richard Williams was a fierce defender of his family. In this time in my life, in this moment, I am overwhelmed by what God is calling on me to do and to be in this world.”

He went on to talk about “protecting” the young actresses in the film, Aunjanue Ellis, Saniyya Sidney and Demi Singleton.

Calling them “the strongest and most delicate people I’ve ever met”, he went on: “I’m being called on to love and protect people, and to be a river to my people. I know to do what we do, you got to be able to take abuse… You got to smile and be like ‘That’s OK’.

“Denzel [Washington], he just said to me, at your highest moment, that’s when the devil comes for you.

“I want to be a vessel for love. I want to say thank you to Venus and Serena for entrusting me with your story. I want to be an ambassador for that kind of love and concern.

“I want to apologies to the Academy and to all my fellow nominees, this is beautiful moment, and I’m not crying for winning an award, it’s about being able to shine a light on all of the people.”

He went on to list the cast and crew of King Richard and the entire Williams family, before adding: “Art imitates life – I look like the crazy father. Love will make you do crazy things.”

He also paid tribute to his mother, who he said “didn’t want to come out tonight – she has this knitting group”.

Notably, with so many apologies in his speech, there wasn’t one for Chris Rock.

While many weren’t sure if the moment was staged or real, it’s possible that Rock’s reference to Pinkett Smith’s hair touched a nerve with Smith, as she has recently spoken publicly about a struggle with alopecia following her diagnosis in 2018.

Pinkett Smith has shared videos on social media talking about the autoimmune disorder, which can cause hair loss and balding. Saying in the past she “struggled” with it, but now “laughed” and refused to “take it lying down”.

In other news from the night, CODA – a movie about the child of deaf adults – took the top prize of best picture, with a cast led by deaf actors, it reinforces the importance of authentic casting.

The film – which raised a record price when it was bought by Apple TV + at Sundance Film Festival – has become the first movie from a streaming platform to win the top prize.

He gave a moving tribute to his father and the deaf community, saying: “My dad he was the best signer in our family, but he was in a car accident and he became paralysed from the neck down and he was no longer able to sign.

“Dad, I learnt so much from you I’ll always love you, you are my hero. Thank you to my biggest fans.

Jessica Chastain took best actress for her role of the titular televangelist in The Eyes Of Tammy Faye, after the hair and make up team took their prize off-stage earlier in the night.

Ariana DeBose took best supporting actress for her portrayal of Anita in West Side Story. DeBose is the first openly queer actress of colour to win an Oscar.

Jane Campion took best director for gothic western The Power Of The Dog, becoming only the third woman to win the award in the show’s 94-year history. She follows Kathryn Bigelow 14 years ago, and Chloe Zhao last year.

She also thanked the late Thomas Savage, the writer of the novel The Power Of The Dog.

Dune mopped up all the early technical awards, nabbing four of the eight craft categories which had been pushed out of the main show and pre-recorded an hour before curtain up.

Sir Kenneth Branagh took best original screenplay for Belfast, a black-and-white semi-autobiographical retelling of his childhood in Northern Ireland at the start of The Troubles.

If you missed any of the ceremony, you can watch again on Monday 28 at 7pm on Sky Cinema or from 10pm on Sky Showcase