Prince Andrew has arrived at Prince Philip’s memorial service with the Queen by his side.

The decision to have the Duke of York accompany his mother to the Service of Thanksgiving will be seen as a clear signal of Her Majesty’s support for her son.

The event marks Prince Andrew’s first public appearance since he was stripped of his military titles and royal patronages in January. 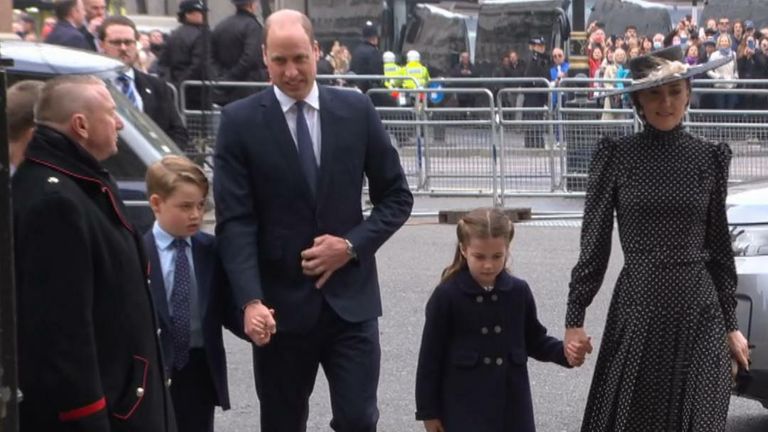 The two royals travelled together from Windsor Castle to Westminster Abbey by car in the Queen’s state limousine.

As they walked through the Poets’ Corner towards her seat in the abbey, the monarch held on to her son’s elbow with her left hand and had a walking stick in her right.

The duke also has a front row seat for the event, sitting close to his other siblings.

It has been more than a month since his sex abuse case was settled out of court for an undisclosed sum.

As part of the agreement with his accuser Virginia Giuffre, he made a “substantial donation” to her charity which supports sex trafficking victims.

In January, the Queen stripped her second son of his prestigious honorary military titles and royal patronages, and he stopped using his HRH style, in a move that effectively cast him adrift from the institution.

Last month, a letter submitted to the US District Court said Andrew “regrets his association” with disgraced financier Jeffrey Epstein.

The scandal led to Andrew stepping down from royal duties in November 2019.

The Queen’s decision to let Andrew attend the service is thought to be a reflection of whether she considers it a family event or an official engagement, and how much she and royal aides would be concerned that his presence could detract from the proceedings.

Large numbers of the Royal Family are attending today’s service, alongside Philip’s friends, colleagues, and representatives of organisations he supported.

Sitting on Andrew’s left are his brother Prince Edward, who is with his wife Sophie and their children Lady Louise Windsor and James, Viscount Severn.

Across an aisle on his right are Princess Anne, Vice Admiral Sir Tim Laurence, Camilla, Prince Charles and the Queen.

Right to abortion overturned by US Supreme Court after nearly 50 years
Kyiv targeted by Russia in ‘symbolic’ attack before NATO summit as one killed and several injured in missile strikes
‘You can never ask a child to go back’: Texas massacre school is to be demolished
British Airways workers at Heathrow vote to strike during school summer holidays
Big things are happening in PFL with Bruno Cappelozza and Renan Ferreira