Ukraine has been accused of launching its first airstrike on Russian territory since the war began – as hopes of an evacuation out of Mariupol faded after a humanitarian team headed to the besieged city.

The International Committee of the Red Cross had planned to deliver aid to the southern port city today, but said this afternoon that its “effort has been and remains extremely complex”.

“If and when safe passage happens, our role as a neutral intermediary will be to lead the convoy from Mariupol to another city in Ukraine,” the charity added.

The charity deems an evacuation effort “unlikely” said Sky’s defence and security correspondent Deborah Haynes, dealing a “huge blow to the people inside that city”.

It came after reports emerged this morning that Ukrainian helicopters had destroyed a fuel depot in Belgorod – in what would be the first airstrike by Kyiv’s forces on Russian territory since the conflict began.

Follow live as Russia is estimated to have lost ‘17,700 soldiers’ in Ukraine

• Peace talks between Russia and Ukraine were due to resume today
• Joe Biden announced the release of a record 180 million barrels of oil to cool crude prices
• Vladimir Putin ordered 134,500 new conscripts into the Russian army, although the defence ministry says this has nothing to do with the war and is part of its spring draft
• Ukraine’s defence ministry said Russian forces killed 148 children during shelling and airstrikes since the invasion started in late February, although those numbers cannot be verified

Up to 5,000 people have been killed in Mariupol and an estimated 170,000 are still trapped and struggling without food, water, or electricity, according to the mayor.

The Red Cross said earlier a team of three cars carrying nine staff members were en route, in the hope of leading a convoy of about 54 Ukrainian buses and a number of private vehicles out of the city.

Russia vowed to open a humanitarian corridor to Zaporizhzhia, but Ukraine says this has not happened.

While Russian troops build up outside Mariupol, Kyiv says Ukrainian forces are still holding the city – a gateway to the Black Sea which links a strategic corridor between Donbas and the Russian-annexed Crimea peninsula.

He added that some areas in the city, north of the border, were being evacuated following the attack.

Footage posted online of a fire at the depot in Belgorod has been geolocated by Sky News.

Ukraine has said it will “not confirm or deny” it carried out the airstrike.

“Ukraine has been defending itself to resist aggression,” Colonel Oleksandr Motuzyanyk told a briefing.

“That does not mean that Ukraine has responsibility for what happens in Russia.” 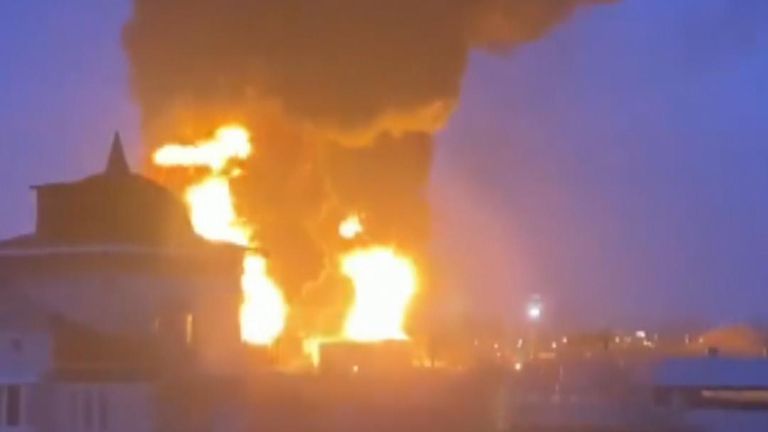 A spokesman for Ukraine’s military said Russian units had “partially” withdrawn from Kyiv and Chernihiv.

“But we can’t predict what will happen, and we aren’t going to reduce our defence,” they said. “Currently Russian troops aren’t sufficient to attack the capital. That doesn’t mean they won’t be in future.”

It came as British defence officials said Moscow was redeploying forces to Ukraine from Russian-backed breakaway regions in Georgia.

The UK’s Ministry of Defence said between 1,200 and 2,000 of these Russian troops were being organised into three battalion tactical groups.

“It is highly unlikely that Russia planned to generate reinforcement in this manner, and it is indicative of the unexpected losses it has sustained during the invasion.”

The MoD also said Ukrainian forces had retaken the villages of Sloboda and Lukashivka to the south of Chernihiv and located along one of the main supply routes between the city and Kyiv.

It reported Ukraine had continued to make successful but limited counterattacks to the east and northeast of Kyiv. 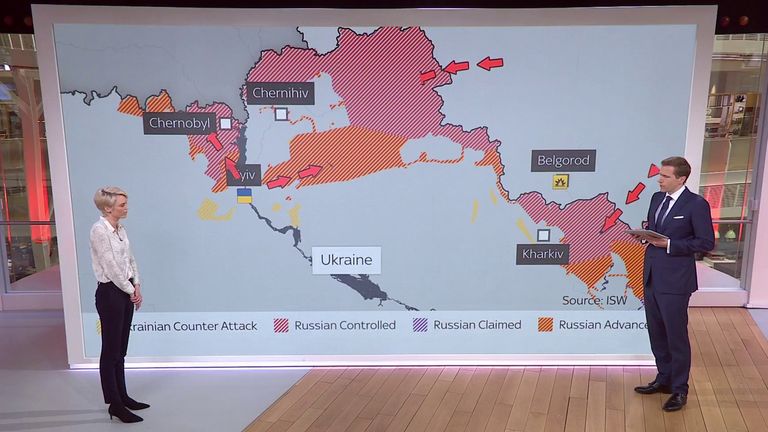 Zelenskyy warns of ‘battles ahead’

Ukraine’s President Volodymyr Zelenskyy warned that Russia was instead moving towards a renewed push in the southeastern Donbas region.

He described the situation in the region – parts of which are controlled by Russian-backed separatists – as “extremely difficult”, adding that there are “battles ahead”.

“We know that (Russian troops) are moving away from the areas where we are beating them to focus on others that are very important – on those where it can be difficult for us,” he said. 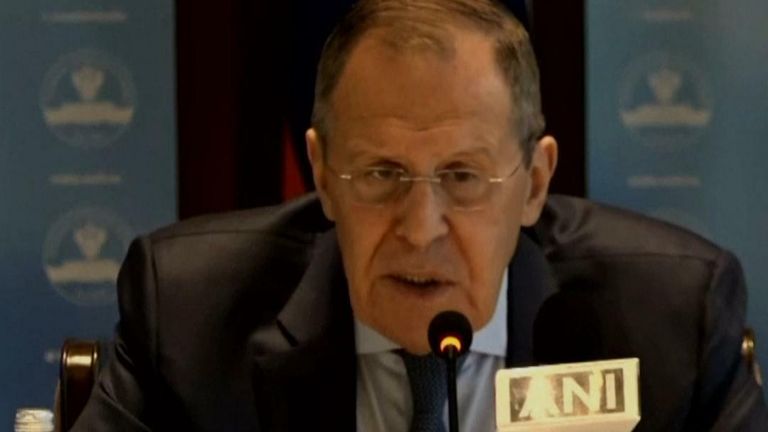 Russia has said it will concentrate on “liberating” Donbas, adding that the winding down of operations near Kyiv and the northern city of Chernihiv was to increase “mutual trust and create conditions for further negotiations”.

Russian foreign minister Sergey Lavrov said on Friday that there was “movement” on peace talks and that Moscow was preparing its response to Ukrainian proposals.

“There are no finally approved plans, certainly negotiations should continue,” he said.

Mr Lavrov said Russia was “preparing our response” to the suggestions that Ukraine could become a neutral country and rule out membership of NATO.