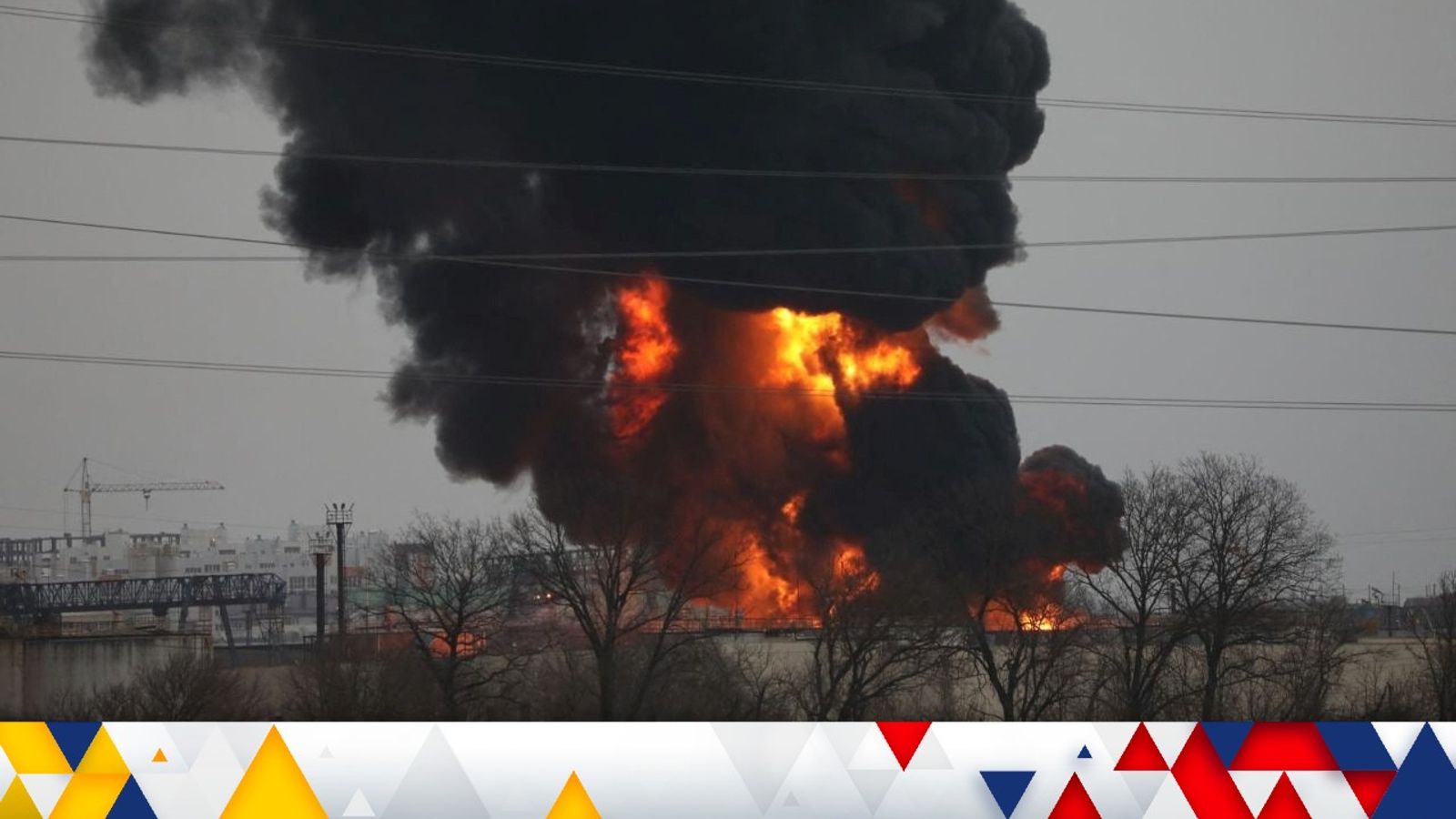 Russia has accused Ukraine of carrying out an air strike on an oil depot in Belgorod, a Russian city close to the Ukrainian border.

This is the first accusation of a Ukrainian air strike on Russian soil since the war between the two countries began on 24 February.

A number of videos appearing to show an air strike and the depot on fire have been shared widely on social media.

This video showing an enormous fire appears to have been taken at the oil depot itself.

The oil depot is not far from the built-up areas of the city and has a number of residential areas around it.

The edge of the building, the electricity lines and lights line up with a Google Map street view which helps confirm where the video was filmed from.

The man filming can be heard saying: “An explosion. Our neighbours – an oil depot – have exploded. They have zero safety arrangements in place there, those buggers. They are slowly burning.

“Somebody said the explosion was not too strong, but it is.”

The moment of attack

A CCTV clip circulating online appears to show the moment of the attack.

The camera is positioned outside a building with a large blue roof, as indicated by the white square. A transmission tower and a white building with a distinctive roof help us geolocate the footage.

The video shows what appears to be two helicopters passing overhead, one after the other.

We have zoomed in on this helicopter to make it easier to see.

Streaks of bright light which appear to be artillery fire fall towards the depot, and shortly after the area fills with light as if an explosion has occurred.

You can see that moment in this clip of the video.

A woman can be heard in the background saying: “Boy oh boy! Poor dogs, they have all run away. One has had its salvo of explosions, then the other.”

Identifying the helicopters – and who is flying them

This video is filmed much further away from the depot.

A brightly coloured building and one with an unusual design can be picked out on Google Maps to help confirm where the video was filmed from.

This video gives us the clearest look at the helicopters, which appear to be flying southwest towards the Ukrainian border.

Defence analysts and an aircraft researcher confirmed to Sky News that the helicopters appear to be Mi-24s. They added it is not possible from the video alone to determine if they are being flown by Ukrainian or Russian forces.

This screenshot from the video enables us to compare the helicopter with a clearer image of a Mi-24.

The video gives us another piece of information. Analysts from Janes, a defence intelligence provider, explain: “The helicopters were flying very low to avoid radar detection.”

Unverified images showing rocket parts reportedly found on the ground in Belgorod also offer some potential insight into what model the helicopters are.

We can tell these are S-8 variants because of two factors; the video showing them being fired, and the motor sections that can be seen near the scene.

Unfortunately we cannot ID precisely what type was used, as the rear motor section is common between S-8 variants. pic.twitter.com/3g8o9QmLzd

Analysts from Janes said the parts appear to be 80 mm S-8 unguided rockets, which are launched from 20-round B-8-family launchers. Those launchers are typical for Mi-24s.

Joseph Dempsey, an aircraft researcher from the International Institute for Strategic Studies, warned that this type of rocket is used by both sides.

He said: “As is the case with a lot of munitions – particularly unguided rockets – they are primarily of Soviet origin and remain in use with both Russia and Ukraine.”

What can we learn from the videos?

The videos show us an attack involving helicopters did occur, but can not provide firm evidence of whether the aircraft are operated by Ukraine or not.

Russia and Ukraine’s version of events

Ukraine’s top security official, Oleksiy Danilov, said on national television: “For some reason they say that we did it, but according to our information this does not correspond to reality.”

Toyota issues recall for its flagship electric SUV following concerns about wheels coming off
Will others follow Tory chairman out of the door?
Voters fed up of hearing how I ‘stuffed up’ PM says as he plays down by-election defeats
Rail passengers face more cancellations tomorrow as union boss hails ‘fantastic’ strike turnout
West Bengal Startup Develops New Device That Can Produce Oxygen From Water