Foreign Secretary Liz Truss has said “atrocities” in Bucha need to be investigated as war crimes after images emerged of Ukrainian civilians lying dead on the streets of the city near Kyiv.

Residents of Bucha said the people were killed by Russian soldiers without any apparent provocation, while Russia has not commented on the claims.

Sky News verified and confirmed the location of two videos showing bodies on the streets of Bucha, including one where at least seven bodies are seen on the road and on the pavement.

Reuters news agency reported that a mass grave in the grounds of a church was still open, with hands and feet poking through the red clay heaped on top.

The scenes have come to light since Russian troops pulled out of areas around the Ukrainian capital, with Ukrainian soldiers regaining control of more than 30 towns and villages in the area after more than five weeks of fighting.

Other key developments:
• Ukraine claims to have retaken control of the entire Kyiv region
• Evacuation attempts from Mariupol continue and seven buses accompanied by the International Committee of the Red Cross will try to get closer to the city, a Ukrainian deputy prime minister said
• Ukrainian troops are at the entrance to Hostomel Airport, controlling the runway that Russia tried to storm earlier in the war. Nearby, Mriya – one of the biggest planes ever built – lies under a hangar, destroyed by Russian attacks
• Peace talks are expected to resume on Monday as the Russian chief negotiator said not enough progress was made to allow direct negotiations between the presidents of Russia and Ukraine

Ukrainian President Volodymyr Zelenskyy had warned on Friday night that Russia was leaving behind “a complete disaster”, with mines around homes and corpses.

On Saturday, Ukrainian soldiers, backed by a column of tanks and armoured vehicles, attached cables to the bodies and pulled them off the street, fearing they could be booby-trapped with explosives.

One Bucha resident told news agency The Associated Press: “These people were just walking and they (the Russian soldiers) shot them without any reason. Bang.

“In the next neighbourhood – Stekolka – it was even worse. They would shoot without asking any questions.”

One of the victims was lying on the road just a few metres from the front door of a man named Vasily, who told Reuters that the dead man had been a lifelong friend and his son’s godfather. Bodies lying on the street in the Ukrainian city of Bucha

Read more: Teenage girl recovering in Ukrane after shrapnel blasted through her skull

Reuters said some of those who lay dead on the road were left with their bicycles, or still clutching bags of shopping, and none of them wore military uniforms.

Some had been dead for many days, if not weeks, they added.

Foreign Secretary Liz Truss said “we are seeing increasing evidence of appalling acts by the invading forces in towns such as Irpin and Bucha”.

“Their indiscriminate attacks against innocent civilians during Russia’s illegal and unjustified invasion of Ukraine must be investigated as war crimes,” she said.

“We will not allow Russia to cover up their involvement in these atrocities through cynical disinformation and will ensure that the reality of Russia’s actions are brought to light.”

She said the UK will “fully support” any war crimes investigations by the International Criminal Court.

“We will not rest until those responsible for atrocities, including military commanders and individuals in the Putin regime, have faced justice,” she added, calling on the international community to “step up” sanctions imposed on Russia.

Russia’s withdrawal from Bucha was part of the country’s pledge to scale back its military activities around the northern areas of Kyiv and Chernihiv, which it described as a trust-building gesture. 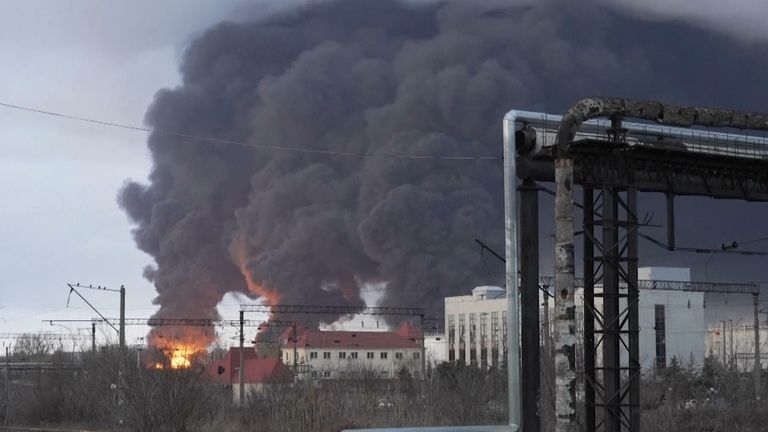 But Mr Zelenskyy is among those who have said that Russia has moved its troops to refocus efforts on capturing the southern and eastern parts of the country.

One of the places seeing increased military activity is the southern port city of Odesa, which was hit by missile strikes this morning.

A Ukrainian official said “critical infrastructure” had been targeted, while the Russian military said it had struck an oil processing plant and fuel depots.

Mykolaiv was also hit by a rocket this morning, according to Anton Gerashchenko, an adviser to Ukraine’s interior ministry.

The southern areas are of vital importance to Russian forces, which are trying to cut Ukraine off from the Black Sea and create a land corridor from Russia to Crimea, the peninsula it annexed in 2014.