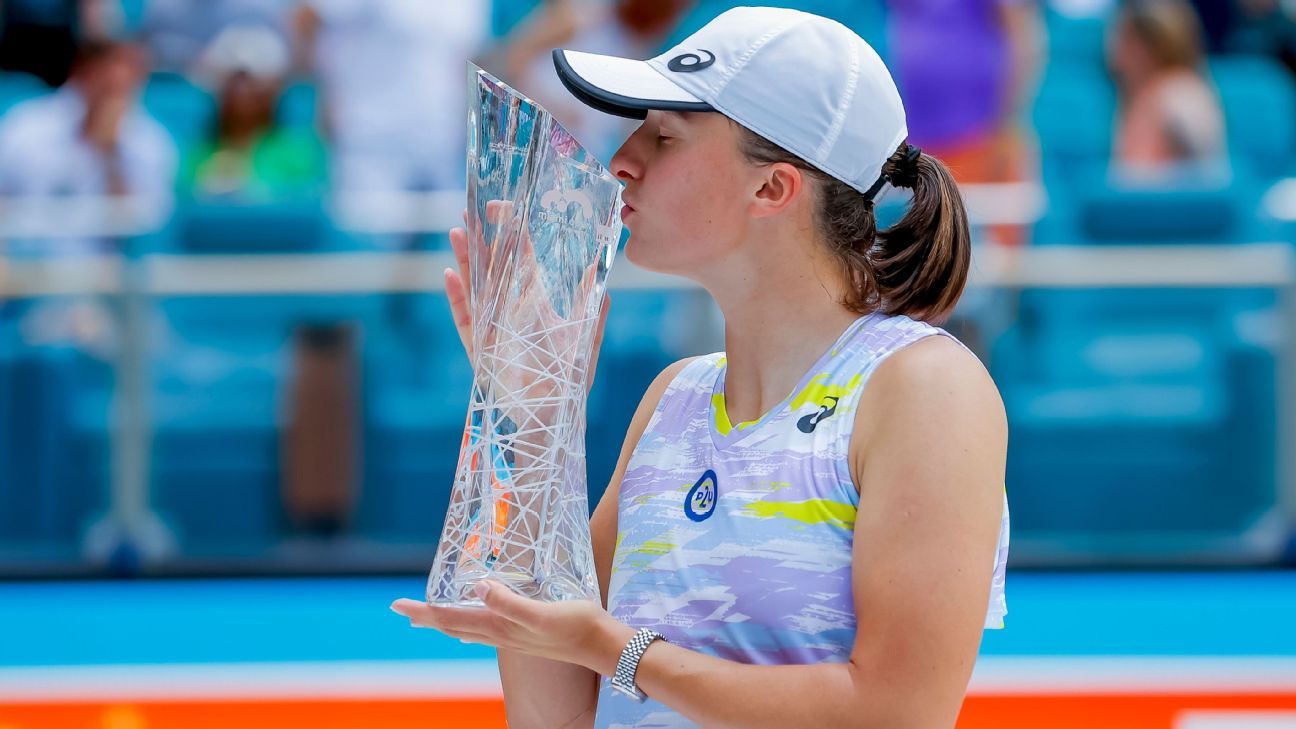 Iga Swiatek left no doubt about her spot atop the game and Carlos Alcaraz and Taylor Fritz earned the biggest titles of their burgeoning careers. If there’s one thing we learned during the Sunshine Double in Indian Wells and Miami over the past month, it’s that the future is very much here in professional tennis.

There were star-studded showdowns and comebacks, record-breaking feats, the shocking retirement of world No. 1 and three-time major champion Ashleigh Barty, and, of course, some unbelievable tennis by some of the game’s rising superstars over the past four weeks.

Here’s what you need to know as we head into the clay-court season, and as you’ll see, March Madness wasn’t just contained to the hardwood this year.

The era of Iga

After the unexpected retirement of Barty, Swiatek, fresh off her title at Indian Wells, simply needed to win her opening match in Miami to take over the top spot in the world rankings. Still, with so much on the line and little turnaround in between tournaments, it wasn’t exactly a given.

But the 20-year-old more than understood the assignment with a dominant 6-2, 6-0 victory over Viktorija Golubic and secured the world No. 1 ranking and became the first Polish player in history to do so.

What a moment, @iga_swiatek 💜 pic.twitter.com/uYgEYD4fpR

Former No. 1 Lindsay Davenport and tournament director James Blake presented her with flowers on the court after the match — and while she later called the moment “pretty surreal,” Swiatek wasn’t distracted by the life-changing moment. Swiatek won the title in Miami, too, with a dominant 6-4, 6-0 victory over Naomi Osaka in the final, and became the fourth woman in history to win the Sunshine Double and the first woman to win the first three 1000-level tournaments of the year.

Holding a 17-match winning streak, and a shiny brand-new ranking, it’s hard to believe hardcourt still might not even be her best surface. Unfortunately for her opponents, the 2020 French Open champion is equally — if not more — dominant on clay, and she will undoubtedly be the favorite at Roland Garros. Barty, for her part, was excited to see what Swiatek would do next.

“I think she thoroughly deserves it,” Barty told reporters after announcing her retirement. “I hope that she can take it and still be her, do it her own way, and really chase what she’s after in her career and her dreams.”

However, as Daniil Medvedev knows all too well, it’s one thing to ascend to the top ranking, it’s a whole other thing to hold onto it. He earned the top spot in February, but lost it following a third-round loss in Indian Wells. He was unable to reclaim it from Novak Djokovic with a quarterfinal exit in Miami, despite Djokovic not being able to play in either event (and having competed in just one tournament on the year). After his defeat in Miami, Medvedev revealed he would be sidelined from play for one to two months because of hernia surgery.

There’s been a lot of talk in recent years about who will take over the mantle in men’s tennis once Djokovic, Rafael Nadal and Roger Federer retire, and it looks as if we might finally have a leading contender. Alcaraz won his third career title, and first at the Masters 1000 level, on Sunday with a 7-5, 6-4 victory over sixth-seeded Casper Ruud, and he made the entire tennis world take notice (if anyone hadn’t already, that is). He dropped just one set in the tournament en route to the trophy.

Sure, it might be slightly premature as he’s only 18, but no one has had this kind of success on the ATP Tour this early since, well, Djokovic, Nadal and Federer. In fact, Alcaraz surpassed Djokovic’s record as the youngest Miami champion in history and he’s the youngest Masters 1000 champion since Nadal in 2005 at Monte Carlo. He’s a staggering 18-2 on the year, and has a 7-6 career record over top-10 players. Alcaraz will now be just outside the top 10 himself in this week’s rankings, at No. 11, for the first time.

Just how remarkable is the Spaniard’s rise right now? Even his competitors can’t help but heap on the praise.

“Definitely he’s playing insane for his age,” said Hubert Hurkacz, the defending Miami champion who lost to Alcaraz in the semifinals. “It’s really incredible how he plays, how he competes. No, definitely it’s something special the way he plays at this age.

“Really, he has an amazing career in front of him. It’s crazy how good he plays.”

After a tearful and unfortunate second-round exit at Indian Wells, some doubted whether Osaka would even play at Miami. But not only was she in the draw, she had a resurgent run through the tournament, notching impressive wins over seeded players Angelique Kerber, Danielle Collins and Belinda Bencic, and made it to her first final since the 2021 Australian Open.

The four-time major champion struggled against Swiatek on Saturday, but it was clear how genuinely happy she was just to have made it back to a title match. She cried tears of joy after advancing in the semifinals and even expressed gratitude after the loss. She dedicated her runner-up trophy to her fans and supporters in a moving on-court speech.

“I know I haven’t been in this position in a little minute,” Osaka said to the cheering crowd. “I know this isn’t the outcome you guys wanted, but I’m having a lot of fun up here, so I hope that I can keep working hard and get more opportunities to be in a situation like this again.”

What a joy it is to see you thriving again, @naomiosaka 💜#MiamiOpen pic.twitter.com/aVjVVkCgSt

Not only was the run a major confidence boost for Osaka, it also gave a major lift to her ranking. Having plummeted to the 80s in January, and being at No. 77 before Miami began, Osaka is now expected to be at No. 36 on Monday.

Taylor Fritz and the Americans

After a tough stretch for the American men in the sport, the Sunshine Double gave some serious flickers of hope for the near future. Taylor Fritz became the first American to win a Masters 1000 event since 2018 with an incredible victory over Nadal in the Indian Wells final (and the first American, of either gender, to win the title at the tournament since 2001). The 24-year-old followed it up with a fourth-round appearance in Miami and will hold the best ranking of his career (12th) on Monday.

Fritz undoubtedly had the best souvenir from the swing among his compatriots, but he wasn’t the only one doing big things. Jenson Brooksby, 21, reached the round of 16 at both events and notched an upset win over fifth-seeded Stefanos Tsitsipas at the BNP Paribas Open. Frances Tiafoe, John Isner and Reilly Opelka all made fourth-round appearances as well during the swing. Isner even earned the Sunshine Double doubles crown by winning Indian Wells with Jack Sock and Miami with Hurkacz.

As for the American women, the bar is considerably higher because of their collective success in recent years. The Sunshine Double wasn’t exactly a runaway success overall, but Jessica Pegula had the best result among all the women as she reached the second 1000 semifinal of her career in Miami and, like Fritz, will have a new career-high ranking on Monday of No. 13. Madison Keys (Indian Wells) and Danielle Collins (Miami) each recorded quarterfinal appearances.

Nadal’s streak comes to an end

Nadal had an unbelievable start to his season, winning three titles, including the Australian Open, and bringing an undefeated record with him to Indian Wells. He was pushed to the limit against some formidable opponents, but for much of the tournament, it looked as if his perfect season would remain and he would be collecting even more hardware when it was all said and done.

However, in the final against Fritz, Nadal needed medical attention as he complained of chest pain and struggled to breathe. Despite his obvious ailments, he still fought for every point with his trademark intensity on full display. He lost the match and two days later it was revealed he had a stress fracture in his rib. Nadal, who had already opted out of Miami, is now sidelined for four to six weeks and his status for the clay season is in doubt. It’s a disappointing outcome for Nadal after such a strong start, but if there’s one thing we know for sure, it’s that he will do everything in his power to be ready to compete for his 14th French Open title.

Why BA still appears to have a Heathrow problem
Can new streamer Paramount+ compete with the likes of Netflix, Disney+ and co?
Rail strikes will cause traffic to surge, AA warns – as list of the most-affected roads is released
Labour bid to grant committee emergency powers after PM’s ethics adviser quits
Woman rescued from hostage situation after putting plea for help in takeaway order