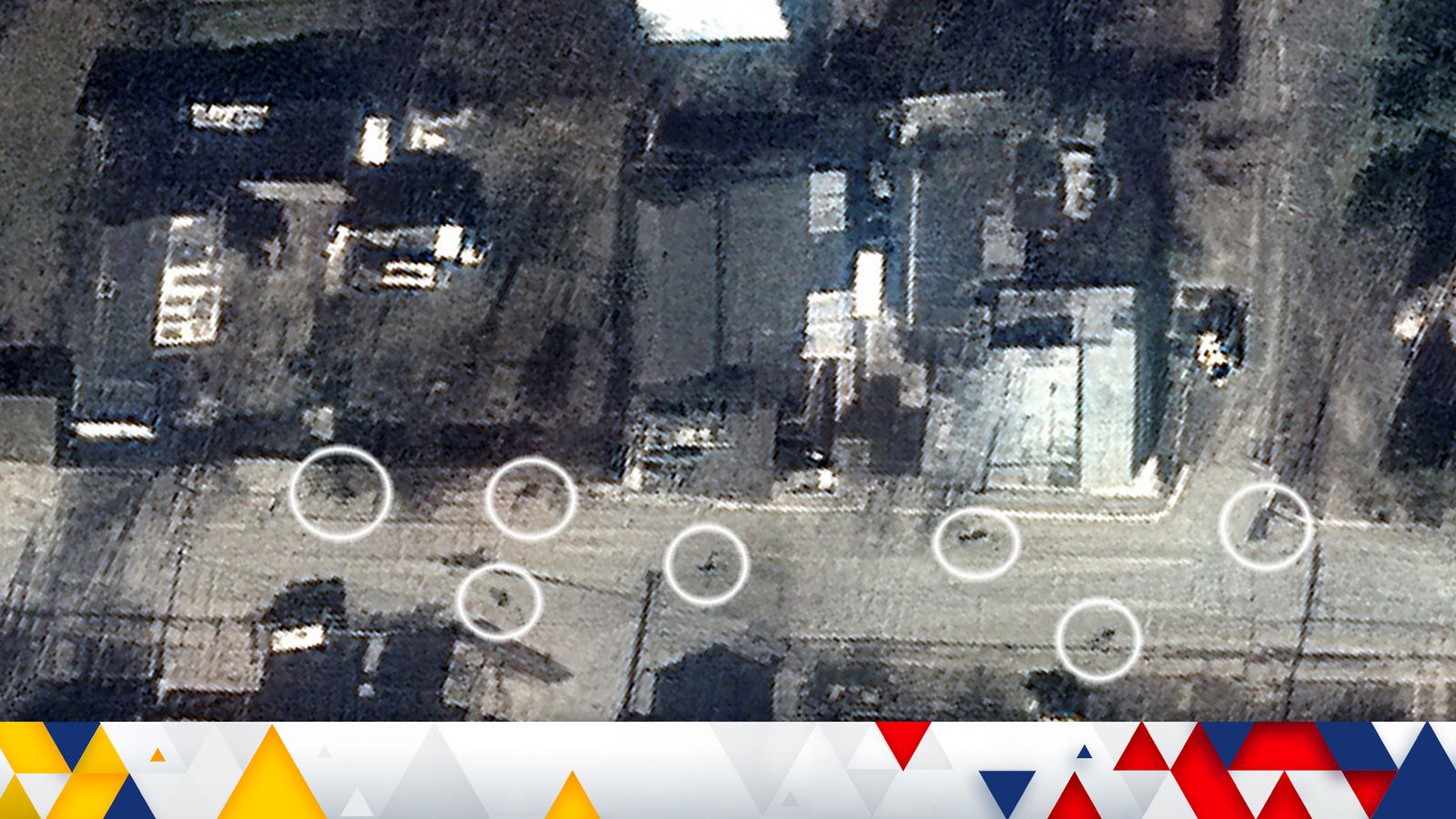 Satellite pictures appear to show dead bodies lying for weeks on the streets of Bucha, where Russian soldiers are accused of committing “war crimes”.

Russian forces are also said to be preparing to launch a fresh offensive in the south east of Ukraine after pulling back from around Kyiv.

President Volodymyr Zelenskyy has vowed to identify Russian troops behind alleged war crimes, saying that Moscow “cannot deceive the whole world” despite its attempts to “distort the facts”.

Despite the high-resolution images contributing to mounting evidence that Russians have committed war crimes in Bucha, the Kremlin has claimed that the scenes in the town were “staged” and “cynical Ukrainian propaganda”.

Vladimir Putin’s government is pouring soldiers into Ukraine’s south east to gain control of the industrial heartland known as the Donbas, according to Ukraine’s military.

High-resolution satellite imagery show that many of the bodies lying in the open in Bucha have been there for weeks, during the time that Russian forces occupied the town.

Bodies are clearly visible in two images taken by Maxar Technologies, a US space technology company, two weeks apart on 19 March and 31 March, discrediting claims they were planted after the Russian withdrawal.

The town, home to about 35,000 people before the war and popular with commuters, was liberated by Ukrainian forces over the weekend.

The images were first assessed by The New York Times.

Annalena Baerbock, the German foreign minister, said the images reveal the “unbelievable brutality of the Russian leadership and those who follow its propaganda”.

One of Mr Putin’s closest allies said on Tuesday that claims that Russian forces had executed civilians in Bucha were Ukrainian and Western propaganda aimed at discrediting Russia.

“These are fakes that matured in the cynical imagination of Ukrainian propaganda,” Dmitry Medvedev, the Russian president from 2008 to 2012, said.

Liz Truss, the UK foreign secretary, said there is increasing evidence of “indiscriminate attacks against innocent civilians” and that they must be investigated as war crimes.

“We will not allow Russia to cover up their involvement in these atrocities through cynical disinformation and will ensure that the reality of Russia’s actions are brought to light,” she said.

Russian forces on Tuesday were preparing for an offensive in the Donbas region, the Ukrainian military said.

After their withdrawal from towns around Kyiv, Putin’s forces are said to be focused on seizing the cities of Popasna and Rubizhne in the Donetsk and Luhansk regions and the Black Sea port of Mariupol, the General Staff wrote on Facebook.

Donetsk and Luhansk are controlled by Russian-backed separatists and recognised by Moscow as independent states.

The General Staff said access to Kharkiv in the east, Ukraine’s second-biggest city, was blocked.

Jake Sullivan, the US national security adviser, warned on Monday that Russia probably plans to
deploy tens of thousands of soldiers in eastern Ukraine as it shifts its focus to the south and east.

After a visit to Bucha on Monday, Mr Zelenskyy renewed his call for more lethal aid from Western leaders, questioning why they had been gripped by “doubts and indecision”.

Later on Tuesday he will address the UN Security Council on allegations of war crimes.

President Joe Biden said on Monday: “What’s happening in Bucha is outrageous and everyone sees it.”