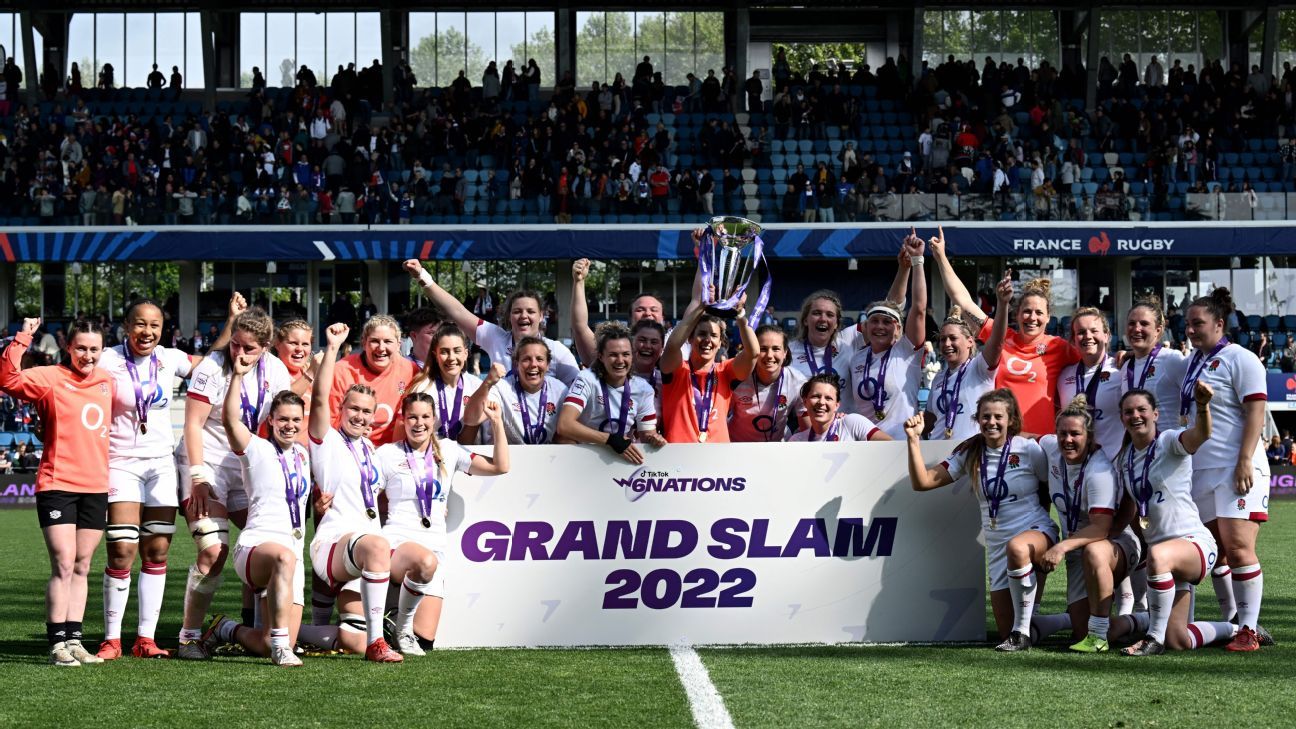 After six enthralling weeks, the 2022 Women’s Six Nations came to a fitting close on Saturday with England storming to a fourth consecutive title. The Red Roses lifted the trophy in Bayonne after beating France in an animated Grand Slam decider, putting an end to what many considered a revolutionary tournament for the women’s game.

Even before the competition began in March, there were murmurs that something special was to come. For a second-year in a row, the competition would be running on a separate calendar to the men’s, and for the first time, every single fixture would be broadcast live in all participating countries. There was a first-ever title sponsor in social media giant TikTok, with a deal that would put more eyes on women’s rugby than ever before. The buzz around the competition was immense and when the tournament opened with England securing their 19th-straight Test win in front of a new Scottish record crowd of 3,988, it set a precedent of what was to come.

Later that day, Wales claimed their first Six Nations win since March 2019 in a thrilling comeback over Ireland. The result came just a few months after the Welsh Rugby Union awarded a dozen of its women’s side landmark professional contracts, as well as 15 players on part-time retainer contracts, proving that by investing into the women’s game and taking away the pressure of balancing full-time careers with elite sport that change will happen. And to top it off, that blistering performance took place in front of 6,113 — another record, this time for a standalone women’s international in Ireland.

A week later, 4,875 watched at Cardiff Arms Park as Wales did the exact same thing against Scotland, sealing the victory with a last-minute try and smashing the Welsh attendance record for a women’s international. In fact, only Italy and France did not break any attendance records during this year’s tournament. England pulled in an impressive 14,689 when they saw off Wales in a third round clash at Kingsholm before smashing that number two weeks later at Leicester’s Welford Road with 15,836 fans — a number just shy of the world record attendance of a women’s rugby international, which stands at 17,440.

As the excitement built up for the Grand Slam decider between France and England on “Super Saturday,” Six Nations CEO Ben Morel confirmed it was likely the women’s competition would continue on a “distinct schedule” from the men’s going forward — yet another step that will help grow the women’s game.

But despite all of this positive change, the history made and the records smashed, there was always a sense that England’s eventual triumph was inevitable, and at times, almost uncomfortable to watch. It did not quite seem right that the finale against France was the only time the Red Roses won by fewer than 50 points. Nor that they scored an average of nine tries per game compared to conceding just four in the entire competition, or that their eventual point’s tally of 282 broke the record for most points scored in a single Women’s Six Nations. But that is the price sport pays when you pit amateur teams against full-time professional outfits.

For all the progress women’s rugby has made in the past few years, England were the only side to enter this year’s competition with a full squad of rugby professionals. It has been that way since 2019 and, unsurprisingly, since July of that year, the Red Roses are yet to lose a match. While France has had a mix of full-time and part-time deals with its players for several years, and Wales since January, the level of investment and development has not matched what England has done. And for Italy, Scotland and Ireland, the three sides that entered the tournament as amateurs, the hill has become just too difficult to climb.

It is not surprising that after a 14-try defeat to England in the second round, Italy announced they were awarding 25 part-time contracts to support their players and help prepare for the World Cup, which takes place in New Zealand in October. It means that Italy’s players will now train from 80 to 130 days a year together, in a move that is a massive step up from their previous offering of expenses only.

Out of everything, it was Ireland who gave us the most powerful reminder of just how big the gap has become. The girls in green went out depleted in Leicester against a full-strength English side after losing nine of their players contracted to the Sevens code, and despite a gutsy first-half performance it ended in a 69-0 defeat. A tweet less than 24 hours later showed player Aoife McDermott back at work on a ward in Ireland — a statement that drove many to call for something to change.

And here’s the difference. While England fly to France this morning to prepare for the final weekend, Ireland’s players are back at work. Hope it isn’t long before stories like Aoife’s become ancient history & everyone gets the support they deserve. https://t.co/k7pJ1uPzmW

Ireland’s head coach Greg McWilliams told the Irish Independent after the loss that contracts are in “the pipeline” for Ireland, something that we know is true after the IRFU accepted this recommendation from an independent review earlier this year, but with no formal timeline it is anyone’s guess when these will be introduced. The same kind of ambiguity exists for Scotland, especially when head coach Bryan Easson said in March that the SRU had moved away from the word contract and has instead given each player “an individual package that suit their lives.” Whatever that means, it suggests it is not a salary and with Scotland condemned to this year’s Wooden Spoon, it might not be too long until the word contract moves back into the conversation.

Then there is the lack of prize money — ruled out as an option by Morel for being “counter-intuitive” as it would only make the leading teams stronger and widen the “sporting gap” already existing within the sport. While at first glance his claims might seem accurate, it begs the question about why, when in the men’s edition Italy have finished sixth in the last seven tournaments, a 10th of the annual revenue from the men’s tournament is still paid out to unions relative to its performance. Surely by his own logic, the distribution of prize money disadvantages Italy as a weaker union. And what about when this “gap” beings to close, will the women then be worthy of financial reward?

While there is clearly a long way to go to level the playing field, the impact of this year’s Women’s Six Nations cannot be understated. It has proven just why women’s rugby is one of the fastest growing sports in the world, and with six months to go until a World Cup, there is certainly a bright future ahead for the women’s game.