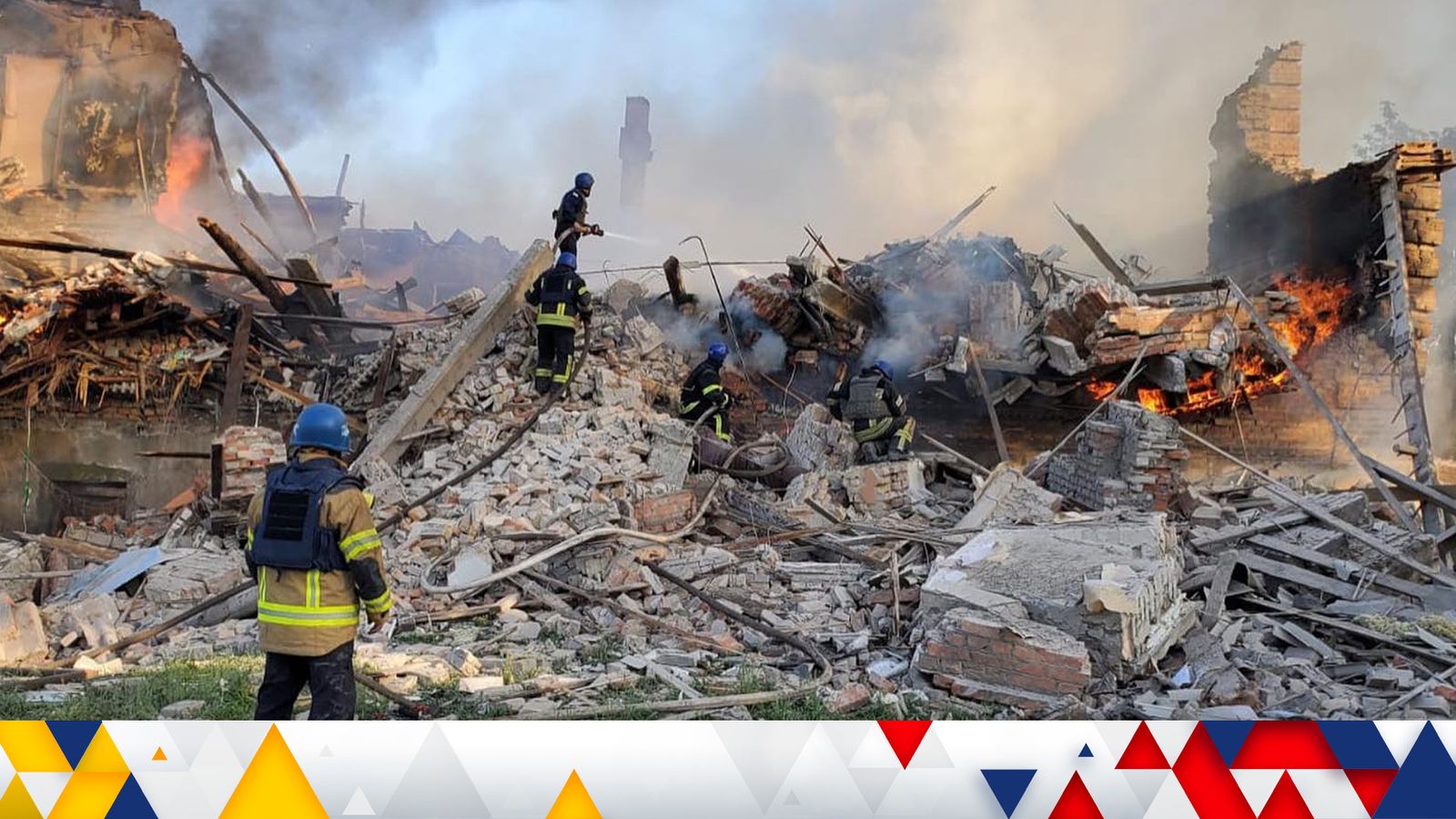 Sixty people are feared dead under rubble after a Russian bomb hit a school in eastern Ukraine.

About 90 people were sheltering in the building when the bomb struck, causing a fire to engulf it on Saturday, the governor of the Luhansk region said.

Two people have been confirmed dead and 60 others are “likely to have died under the rubble”, Serhiy Gaidai wrote on the Telegram messaging app.

Thirty people have been rescued, seven of whom were injured, he added.

The attack in the village of Bilohorivka came as Russian forces kept up their barrage of southern Ukraine, hitting the major Black Sea port of Odesa with cruise missiles.

They have also bombarded the steelworks on the coast in Mariupol where Ukrainian fighters remained trapped underground.

Vladimir Putin is aiming to complete the conquest of Mariupol in time for Russia’s Victory Day celebrations on Monday, but his forces are still facing dogged resistance from within the bunkers beneath the factory.

In Russia, Victory Day on 9 May is one of the country’s most important national events – a remembrance of the sacrifices made by the Soviet Union in defeating Nazi Germany.

In an emotional address on Sunday for Victory Day, Ukrainian President Volodymyr Zelenskyy said: “The evil has returned. Again.

“In a different form, under different slogans, but for the same purpose.”

Mr Zelenskyy will hold talks with Boris Johnson, Joe Biden and leaders from other G7 nations on Sunday to discuss additional support.

It comes after the UK said it would provide a further £1.3bn in military support to Ukrainian forces.

In a sign of Ukraine’s effective defence in the 11th week of the war, its military flattened Russian positions on a Black Sea island that was captured in the early days of the conflict, and has become a symbol of resistance.

Snake Island, located some 20 miles miles off the coast, figured in a memorable incident early in the war when Ukrainian border guards stationed there defied Russian orders to surrender, purportedly using colourful language.

Ukraine’s military said retreating Russian forces destroyed three bridges on a road northeast of the city to try to slow the Ukrainian advance.

In neighbouring Moldova, Russian and separatists troops are on “full alert”, the Ukrainian military has warned.

The region has increasingly become a focus of worries that the conflict could expand beyond Ukraine’s borders.

Pro-Russian forces broke off the Transnistria section of Moldova in 1992, and Russian troops have been stationed there since, ostensibly as peacekeepers.

Those forces are on “full combat readiness”, Ukraine said, without giving details on how it came to the assessment.

Moscow has sought to sweep across southern Ukraine both to cut off the country from the sea and create a corridor to Transnistria, but it has struggled to achieve those objectives.