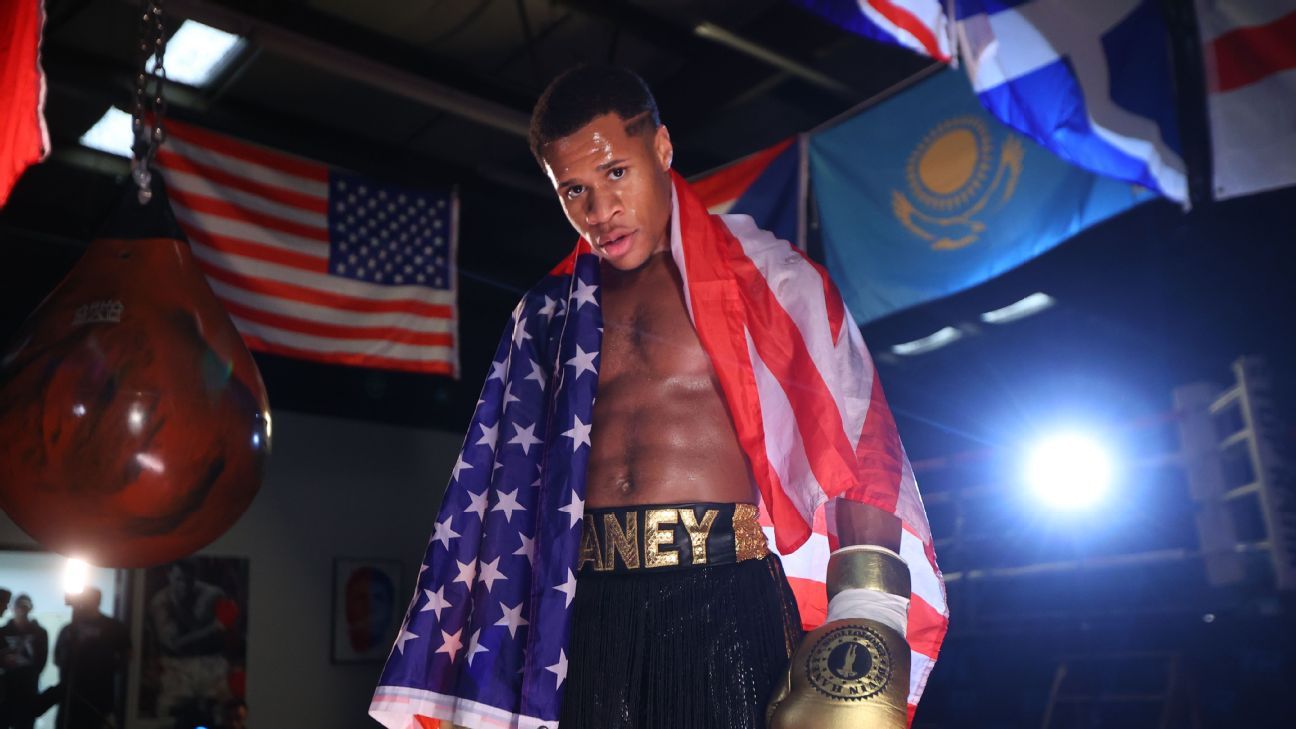 Likenesses of those fistic titans peered at Devin Haney from the walls of the Top Rank Gym, where the budding star prepared for the fight of his life just days before he set off for Melbourne, Australia.

That’s where Haney will meet George Kambosos Jr. for the undisputed lightweight championship (9 p.m. ET on Saturday, ESPN/ESPN+), in the type of showdown that could launch Haney to genuine superstardom stateside upon his return. It’s an opportunity Haney and his father, Bill, have been physically and spiritually working toward since Devin’s early days fighting in Mexican dive bars.

Rather than push for an Olympic bid, a 17-year-old Haney plied his craft in Tijuana with paid fights against tough Mexican boxers. Six-and-a-half years after his pro debut on the Pacific Coast of Mexico, Haney will seek the culmination of his efforts halfway around the world.

Top Rank Boxing is now on ESPN and ESPN+. Subscribe to ESPN+ to get exclusive boxing events, weigh-ins and more.

And he’ll do so without his biggest support, his father and trainer, Bill Haney, and his co-trainer, Ben Davison, who both were denied visas to enter Australia.

And when Haney (27-0, 15 KOs) enters the ring at Marvel Stadium, he’ll have to contend with much more than just a hungry, young fighter who’s being counted out again. He’ll also be dealing with as many as 53,000 Aussie fans cheering for Kambosos and, perhaps, three judges who may be impacted by that noise.

Of course, this is nothing new for Haney, who took an unconventional path to this 135-pound summit meeting. Ten of his first 15 pro fights took place in hostile territory south of the border.

“It definitely made me the fighter that I am today … fighting in bars with 500 to 2,000 people all booing me, cheering against me and me coming out on top,” Haney told ESPN. “All those moments … have molded me and got me ready for this big moment.”

WHEN KAMBOSOS WAS announced as the winner against Teofimo Lopez in November, the Haneys erupted in jubilation at the fighter’s home.

Kambosos (20-0, 10 KOs) was a 6-1 underdog to defeat Lopez, who held all four belts (three world championships and the WBC franchise belt), when they met in New York. But the 28-year-old shocked the boxing world when he floored Lopez in the opening round and survived a 10th-round knockdown to prevail via unanimous decision and knock off the rising star.

Kambosos was unheralded before the upset victory over Lopez, but Haney said that wasn’t the cause for celebration.

“Me and you agreed if you won that you would fight me?” Haney commented on Kambosos’ Instagram video of the celebration. “Of course I was happy I would get my shot.”

One week after the bout with Lopez, Kambosos was ringside in Las Vegas for Haney’s Dec. 4 unanimous-decision victory over Joseph Diaz Jr., which capped a breakout year for the American. It followed a decision win over Jorge Linares in May.

Entering 2021, Haney had never faced a former champion nor a boxer rated top 10 in his weight class by ESPN. Linares and Diaz checked both boxes and offered proof that Haney was ready for even better competition in 2022.

Kambosos’ victory over Lopez appeared to pave the way for Haney to vie for the undisputed title. In an increasingly fractured sport that is often muddied by promoter allegiances, Kambosos is the rare network free agent.

For years, Haney was aligned with Eddie Hearn’s Matchroom Boxing, which has an exclusive deal with streaming service DAZN. Now a free agent himself, Haney looked to fight Kambosos on DAZN.

Kambosos had other ideas, though, and his promoter, Lou DiBella, closed a deal with Top Rank for a fight with Vasiliy Lomachenko, the man Lopez beat to capture all four belts.

After Lomachenko agreed to the deal, Russia invaded Ukraine, where Lomachenko lives with his family. The former three-division champion ultimately decided to remain in the war-torn country rather than leave and prepare for a boxing match in Australia.

Left without an opponent and with time running out to properly promote the homecoming event, DiBella and Kambosos circled back to Haney, but with a twist: Fight on ESPN or lose the opportunity.

Haney signed a two-fight deal with Top Rank and agreed that if he wins, Kambosos can exercise his right to a rematch later this year in Australia. The fight Haney wanted all along — the one he just knew could make him a star — was on.

“He was forced into this fight, he was doing anything that he could to avoid me after he said that he would fight me,” Haney said. “We were talking about fighting even before he won the Teo fight and then he was going the Loma route. Things happened and I would never wish that on anybody, any country. Would never want anyone to go to war so I can get my shot at belts.

“There were so many things that they wouldn’t even negotiate. … It should be one fight [in Australia] and then the champion chooses the [location of the] second fight. The things that they thought I wouldn’t take, I took, and I did whatever I could to make the fight happen, and here we are.”

TIME AND TIME again, Haney used his jab — one of the best in boxing — to break the guard of his sparring partner. First, on this balmy Friday afternoon in May, Haney used his choice punch to set up Rocky Hernandez, a contender with a 31-1 record from Mexico, who was emulating Kambosos’ pressure style.

After three rounds, a fresh sparring partner replaced Hernandez. This time, it was Kenneth Sims Jr., a fighter with a 17-2-1 mark from Chicago who upset top prospect Elvis Rodriguez last year. The final three rounds of the nine-round session were saved for Kevin Johnson, an 11-2 boxer from Vegas.

Against each man, Haney’s excellent jab was on display as it changed levels and dictated the action. And if he’s going to beat Kambosos to become the ruler of the lightweights, that punch will surely be the key.

All the while, his father leaned over the ropes and shouted instructions. But neither that familiar face, nor that of Davison, who guided Josh Taylor to the undisputed junior welterweight championship, will be there when Haney returns to the corner on Saturday.

Instead, Haney’s corner will be led by Yoel Judah, the father and trainer of former undisputed welterweight champion Zab Judah (Haney’s godfather).

“This was a 1992 conviction that was well before he was born,” Bill Haney told ESPN’s Mark Kriegel, explaining the reason behind his visa denial. “But I think that this is now going to propel Devin to bring out the best. It was hard to let him go, though. … Devin assured me that he was going to … bring back the belts and that it wasn’t going to be any problem.”

Regarding his son being cornered by Judah, Bill Haney said, “Their relationship was blessed in front of God. Yoel has been like a grandfather. He’s been like a father figure to me both in this boxing game and the way that we approach life and being 100% behind our sons.”

The third staple of Haney’s rise who won’t be in Australia: Eddie Hearn. The Englishman promoted Haney’s past six fights, which coincided with his rise to relevance in the world boxing landscape.

“It was a very tough decision for me; I am a very loyal guy,” Haney said. “Eddie has done a lot for me, and I couldn’t thank him enough for getting me to this point. But business is business and I had to do what was best for my career.

“I’m here at ESPN and they will make me into a star,” added Haney, who has over 1.2 million Instagram followers. “This is what I needed; this is what I’ve been missing in my career. … The world gets to see me fight on national television. This one fight [on ESPN] will have more views than all my fights on DAZN put together. This is a huge opportunity for me.”

WHEN HANEY STEPS through the ropes on early Sunday afternoon in Melbourne, the coastal capital of Victoria in the southeast, he’ll seek far more than titles or even stardom could bring him.

The WBC elevated Haney from interim champion to titleholder in October 2019, and that meant far more lucrative paydays guaranteed by his contract with Hearn. It also meant insults from contemporaries such as Lopez, Ryan Garcia and Gervonta Davis, who has called him an “email champion,” a nod to the fact he didn’t win the title in the ring.

Further complicating matters was the WBC’s creation of the so-called franchise championship, which was bestowed upon Lomachenko. The designation allowed Lomachenko to skirt mandatory challengers and, ultimately, a fight with Haney that the upstart was calling for. “It’s a title to basically duck your mandatory,” Haney said.

Lomachenko lost that franchise title along with two other belts in an October 2020 bout with Lopez. A little over a year later, the titles were grabbed by Kambosos, whom many then called undisputed — but not Haney. He was still WBC champion, and yearned for his shot to settle who the best lightweight is.

“I wanted to put a stop to the confusion: The email champion or the franchise and all that,” said Haney, ranked No. 2 by ESPN. “I feel like after this fight the world is going to give me my credit as a true champion, undisputed.

“I went in his backyard and beat [Kambosos] in front of his fans — beat him in front of his people — and took it from the champion,” he added. “There will be one king in the lightweight division, and that will be me.”

Haney’s path to stardom is littered with roadblocks. He must beat Kambosos not once, but twice, and both times in Australia. And entering next year, plenty of more work will remain.

“Tank” Davis cemented himself as a bona fide star on Saturday, selling out Barclays Center in Brooklyn, New York, for his sixth-round TKO of Rolando Romero. Garcia, with his 8.8 million Instagram followers, is another top-flight attraction. Haney has a genuine chance to join them.

Haney isn’t a devastating puncher like Davis or Garcia, but he’s certain that doesn’t matter. He points to the most recent bout by Canelo Alvarez, the current face of boxing, who is reeling from an upset loss to Dmitry Bivol last month.

“Canelo was throwing the power punches and Bivol was beating him with speed, movement, IQ,” Haney observed. “And that’s just what it takes to take over the fight game. Skills pay the bills.

“If you look at the history books, it’s only been a few punchers that have just taken over. Overall, it’s been the boxers. The boxers always prevail, whether it’s Ali, Floyd, whether it’s Sugar Ray [Leonard]. The punchers fall in love with their power, and when it doesn’t work, they fall apart.”

When the bell rings for his clash with Kambosos, Haney is confident he’s built for this moment after all those fights in Mexican bars.

Haney remembers being booed even against Diaz, and that was in his hometown. If he wants to even scratch the surface of joining the likes of boxing’s greats, it will take far more than a couple of wins. But it all starts this weekend in that familiar discomfort of enemy territory.

“You can have all the belts and still not be a star,” Haney said. “Me with my charisma, the person that I am, everything that I bring to the table, in due time, I will be the biggest star in boxing. This is just one step closer to where I want to be.

“Whether they boo me or not, they can’t fight for George Kambosos,” he added. “I will embrace the crowd, and by the end of the night, they will be cheering me on.”