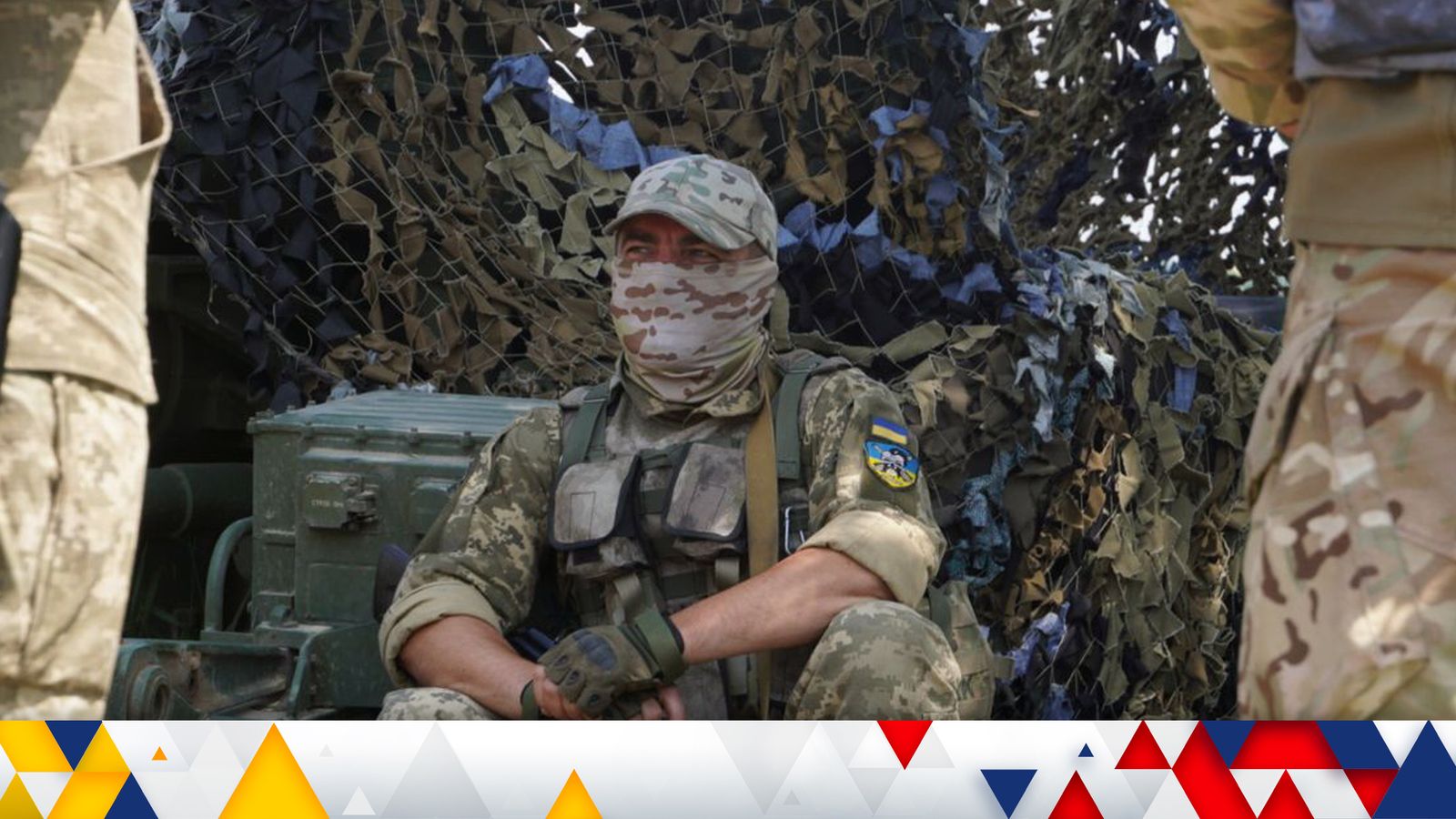 The treeline gives a little respite from the blazing sun and cover for the soldiers on the frontline.

A spotter crouches, binoculars to his eyes, scanning the woods in the distance for movement.

The Russian forces are close.

Each side knows where the other is; the Russians used to occupy this small camp until they were pushed back.

I wonder about the tactical wisdom of returning to a site which the Russians must know the exact coordinates of, but push it out of my mind.

It is now a Ukrainian artillery base – a howitzer, covered in camouflaged webbing and foliage points at the hidden enemy, silent for now.

“It can be quiet, but then the next minute you’re under shelling,” Andrii, the Field Commander tells me.

As if on cue, the whoosh of Grad rockets interrupts the interview. It is outgoing, so we carry on.

“They (the Russians) don’t spare their ammunition. Their drones fly, even if they see there is only one or two people, they will send a barrage of rockets.”

The shelter under attack is a dug trench position, cut into the ground. It is small, just enough room for bunk beds and a small stove.

The mish-mash of uniforms and equipment belies the bravery with which these men have fought and their unexpected successes against an enemy that is far more powerful on paper.

Not enough weapons for number of recruits

But it is immediately evident why Ukraine continues to plead for weapons from the West. There literally are not enough guns to go around.

“Everybody is ready to fight but to be honest we have a lack of weapons,” another soldier says.

“We have a lot of people, there are still people going to recruitment centres, they want to fight, but as we have a lack of weapons it’s impossible for everyone to have a weapon in their hands.”

The frontline has barely moved in weeks and both sides seem well dug in. It is reflective of a frontline that is entering stalemate in places.

Nearby, the blue and yellow Ukrainian flag flies at a crossroads, deliberately placed so as to be visible to the Russian positions.

The Russians are banking on wearing the Ukrainians down, but they have not yet, and frankly it is impossible to fathom how they imagine they will break the determination of these soldiers to protect their homeland.

The sound of artillery strikes rumble around us; smoke rises behind trees on the horizon. “A bridge. One of theirs,” a soldier tells me.

And then they tell us to run. The Russians are responding.

This is what it is like, every day. An unrelenting war of artillery, which neither side is winning, or losing.